The roughly 17,000 fans of the Kansas City Chiefs who filed into Arrowhead Stadium for the start to the NFL season Thursday found themselves thrust into the middle of the nationwide discussion about social injustice. It was an NFL opener unlike any other: masks worn by everyone from socially distanced fans to the coaching staffs, a series of videos raising awareness of social justice initiatives and encouraging people to vote, and ultimately both teams locking arms in a display of unity prior to the coin toss.

The Super Bowl champion Chiefs had already prohibited fans from wearing headdresses or war paint amid a push for more cultural sensitivity.

But it was the response by some fans after the national anthem that lit up social media as the game played out.

There was no live version of the anthem, CBSSports.com reports. But a prerecorded version of “The Star-Spangled Banner” was played on the video board.

Chiefs defensive end Alex Okafor took a knee and raised his fist in the air as two Chiefs players put their hands on his shoulders in solidarity.

The NFL showcased the anthem during the game broadcast and posted it to the league’s social media account soon after, CBSSports.com notes.

The Houston Texans remained in their locker room during the anthem, and fans booed them when they emerged from the tunnel at its conclusion.

The booing continued as the two teams walked to midfield and shook hands, interlocking their arms at the 50 yard line during what was supposed to be a moment of silence. 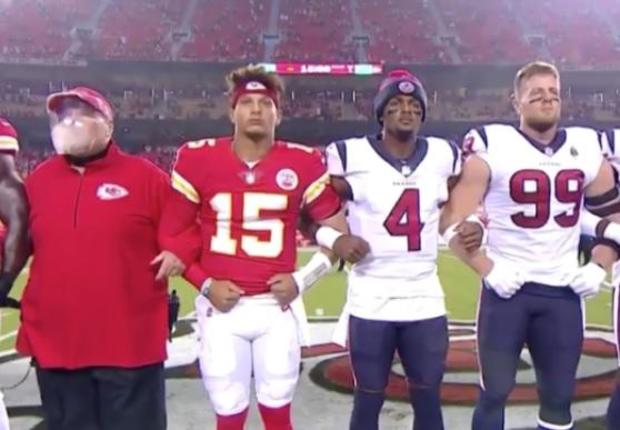 “The moment of unity I personally thought was good. The booing was unfortunate in that moment,” Texans defensive end J.J. Watt said after the Chiefs emerged with a 34-20 victory. “I don’t fully understand that. There was no flag involved, there was nothing involved with that besides two teams coming together to show unity.”

Nationwide calls to address racial issues have become more prevalent since George Floyd died May 25 after a white Minneapolis police officer pressed his knee into the handcuffed Black man’s neck for nearly eight minutes during an arrest. Four officers were fired and have been charged in Floyd’s death, and protests have continued to grip the nation.

Players from both teams discussed how they would handle pregame in the weeks leading up to the opener.

Still, the booing by some fans became the dominant story line on social media as the game played out. 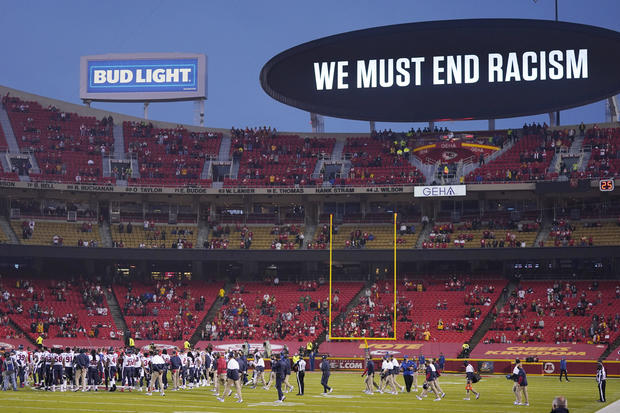 “The moment of unity I personally thought was good,” Watt said to the NFL Network’s James Palmer.”I mean, the booing during that moment was unfortunate. I don’t fully understand that. There was no flag involved. There was nothing involved other than two teams coming together to show unity.”

Meanwhile, the move to rein in Native American imagery by the Chiefs has been seen as a good first step, but it also has frustrated some of the franchise’s longtime fans, including some who were in the stands as the team became the first to take the field in front of a crowd — albeit a smaller than normal one — during the coronavirus pandemic.

“I think it’s a little overboard, but I mean, we’ve got to listen to the rules,” said Kory Noe, who owns a car lot in Stafford, Missouri. “I’m a big fan of the tomahawk chop. It’s just been the Chiefs’ signature song since they started and it’s going to be hard not to do it if they take it away.”

In fact, the Chiefs are pushing a subtle change to the tomahawk chop celebration amid complaints that it’s racist. The plan is for cheerleaders to use a closed first instead of an open palm to signal the beating of a drum. The team typically has a celebrity or other guest of honor beat a large drum before the start of the game.

“We’ve started to work and started some discussions about trying again to educate and make people aware of the sacred position of the drum in the American Indian culture, but also that it’s seen as sort of the heartbeat of that culture,” Chiefs president Mark Donovan said “It’s easy to latch onto that, say, ‘OK, it’s kind of the heartbeat of the stadium, too.'”

The changes in Kansas City came after several professional franchises, including the Cleveland Indians in Major League Baseball, have been pushed to drop racist imagery. The biggest victory for supporters of Native Americans may have come before the start of the football season, when the Washington franchise dropped Redskins as its nickname.

“I see where the problem is with having (a headdress) and doing the face paint and everything, because you’re not a part of their culture,” said Jackson Allen, a 24-year-old sales rep from Springfield, Missouri. “It’s offensive. I can see the problem.” 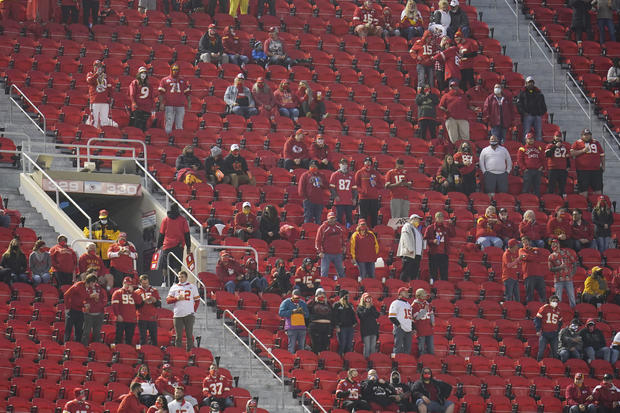 The Chiefs have worked with tribes for the past six years to distance themselves from imagery that could be considered racist. Each season, a game is dedicated to Native American heritage.

Students at nearby Haskell Indian Nations University in Lawrence, Kansas, were among those who demanded changes.

“Using this mascot and having this fan base of predominantly white people wearing face paint and headdresses and doing the tomahawk chop, and it energizes them and gives them this sense of power, and then thinking there is nothing wrong with doing that is just mind boggling to me,” said William Wilkinson, a 22-year-old business major from Madison, Wisconsin, who is Navajo, Cherokee, Mandan, Hidatsa and Arikara.

Wilkinson also said the Chiefs should change their nickname, although the franchise has maintained for years that it is named in honor of H. Roe Bartle. The philanthropist and two-term Kansas City mayor, whose nickname was “Chief,” was instrumental in helping to relocate the team from Dallas.

Ty Rowton, a self-described superfan who goes to games as the X-Factor, often attends with a foam Arrowhead on his head, beads and a cape signed by players. But he has made one change to his costume: Instead of face paint, Rowton affixed duct tape with Bible verses to his face.

He thinks the team’s changes are an overreaction and that the Chiefs should keep the tomahawk chop, call it “something that gets us riled up together and that we do as one. It has never been meant to be disrespectful.”

Gaylene Crouser, executive director of the Kansas City Indian Center, said it’s wrong to use “a race of people as a mascot.”

It has always been swept under the rug,” she said, “but because the Washington team was leaned on so hard that they made the change, now some of the other ones are starting to feel the heat. I hope this is the beginning of the end of this acceptable racism.”