The great Christmas melt-down! People share stories of festive family tension – including a mother-in-law refusing to open her gifts and a wife unnerved by her husband hugging his MUM all day

Tis the season to be jolly…until about 2pm on Boxing Day when cabin fever – coupled with a blistering Christmas hangover – sets in.

On social media, people have been sharing their experiences of that annual festive tradition – the family row. Tempers across the land, globe even, have been fraying as too much time with loved ones begins to grate.

Mumsnet users have been detailing their yuletide annoyances including one woman who found herself inwardly seething because her mother-in-law refuses to open presents in front of people – and another forced to have her lunch served up with a side-portion of racism. 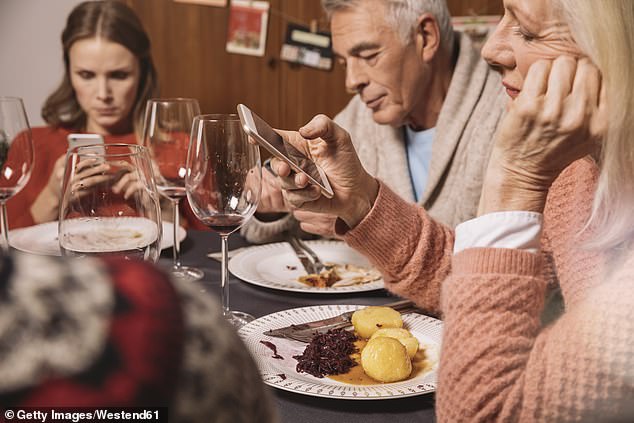 Christmas fall-out: People have been sharing tales of their festive family rows on parenting site Mumsnet 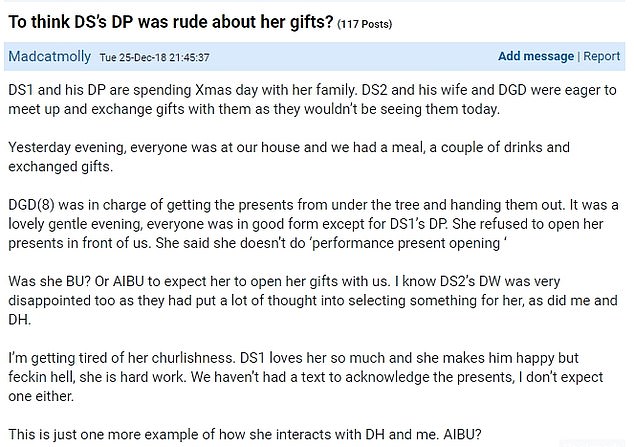 Madcatmolly took to the parenting site to vent about their partner’s mother, described as DP. They wrote: ‘Yesterday evening, everyone was at our house and we had a meal, a couple of drinks and exchanged gifts.

‘It was a lovely gentle evening, everyone was in good form except for DS1’s DP. She refused to open her presents in front of us. She said she doesn’t do “performance present opening.”‘

And then there’s the woman deeply unnerved by the fact her other half has spent the day cuddling up to his mother on the sofa.

Lellikelly26 vented: ‘Yesterday my DH was sat on the sofa with his DM cuddling her and kissing her on the head. this has made me feel a bit sick and has put me off him. I’m all for affection but sitting on the sofa cuddling your mum all afternoon is surely a bit much.’

And casual – and not so casual racism – seems to rear it’s ugly head.

Violetroselily revealed: ‘I’ve been at my mum’s for the last few days and I’m agog at the stuff coming out of her mouth.

‘This is a woman who lived in a multicultural part of London for 30 years and raised her children there.

‘Since retiring to middle England she’s become the most xenophobic, islamaphobic, millennial-hating person I’ve ever met.’

Elsewhere, one woman reveals her father won’t stop over-sharing. Heather1 penned: ‘My Dad has no filter. And I mean no filter. Yesterday he was telling my sister about the pains in his penis. He told me about his bowel accidents and medical procedures due to his bowels. While I was eating my dinner.’

Homethroughthepuddles berated those who opt out of driving over yuletide, writing: ‘I’m once again spending Christmas having to do all the ferrying around and staying off the wine, while my sister, who has learnt to drive and even bought a car but has refused to sit her test, has been chauffeured around and been able to drink as much as she likes.’

Others yearned for the hilarity difficult relatives now deceased brought. Ghostsauce wrote: ‘I miss DPs now dead very elderly auntie who used to sit farting at the dinner table, drink 3 bottles of wine, and declare us all boring and say all presents were rubbish. She was hilarious and the highlight of my Christmas.’

Tis also the season of strange behaviour. And a visiting father-in-law left his family bemused after foregoing cereal bowls. DamsonWhine wrote: ‘Yesterday my FIL ate dry muesli for breakfast. He doesnt like what I usually serve, but there was loads of other cereal, toast, marmalade etc.

‘This morning he ate his dry muesli from my favourite coffee cup. Wtf. Then he was defensive and rude when dh asked if he wanted a bowl.’