Things are heating up on Onyx Collective and Hulu’s hit legal drama Reasonable Doubt, and we have an exclusive clip of next week’s episode.

Reasonable Doubt – a play on the legal term and Jay-Z’s critically acclaimed debut album, featuring episode titles lifted from tracks by the rapper – follows Jax (Emayatzy Corinealdi), a high-powered lawyer at a prestige firm, who kills it in the courtroom while not quite having the firmest handle on things in her home life.

Beginning with a flash-forward that finds our imperfect protagonist in a harrowing, potentially deadly situation, the hour-long drama finds Jax navigating a whodunnit at the intersection of race, gender, and politics, putting her tumultuous personal relationships on the backburner while diving head-on into a case she’s not always sure she’s on the right side of.

As we saw on episode 104: “Guilty Until Proven Innocent,” Jax’s personal life is crumbling on more than one front. Not only do things remain in an ambiguous, rocky space with her husband Lewis (McKinley Freeman), but her relationship with her mother is increasingly strained, and even her own friends are beginning to give her the side-eye due to her self-absorbed ways. 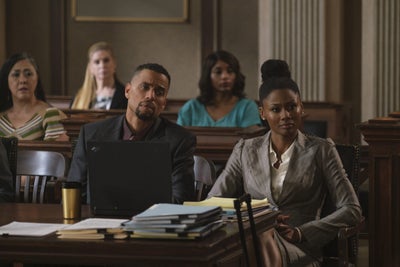 But as this clip shows, it seems Jax used to don her homegirl hat a bit more often. A flashback to 16 years prior, when she was still a bright-eyed public defender, shows her stepping in to provide a comforting word (in between giggles) to her ride-or-die doctor friend, Sally (Nefetari Spencer).

Sally, clearly drunk, worries that she can’t be a good wife due to her … adventurous past. But Jax reassures her that who she was before she fell in love with her husband is of no consequence now, and generously holds her hair back as she pays the inevitable price for having a few cocktails too many.

Reasonable Doubt streams on Tuesdays, only on Hulu.