40 Christmas crackers you must not miss! Event selects the TV highlights over the festive season

Specials from Strictly, Call The Midwife and Bake Off, the lives of Billy Connolly and Torvill and Dean, new Poirot and Luther – and Santa’s pants!

Laughs, jokes and tears as Sheridan Smith headlines this filmed stage version of the musical classic. 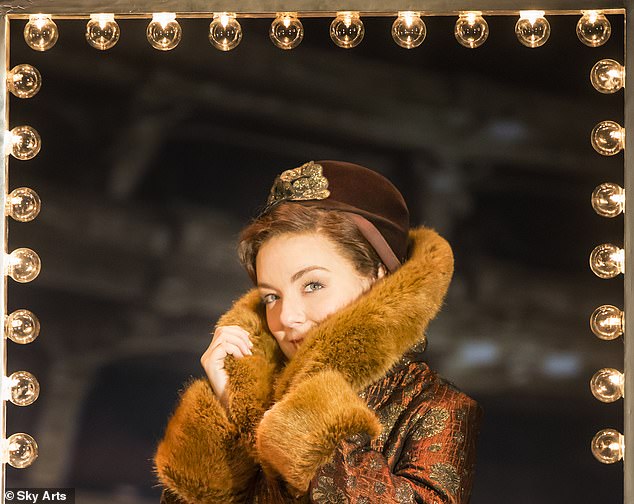 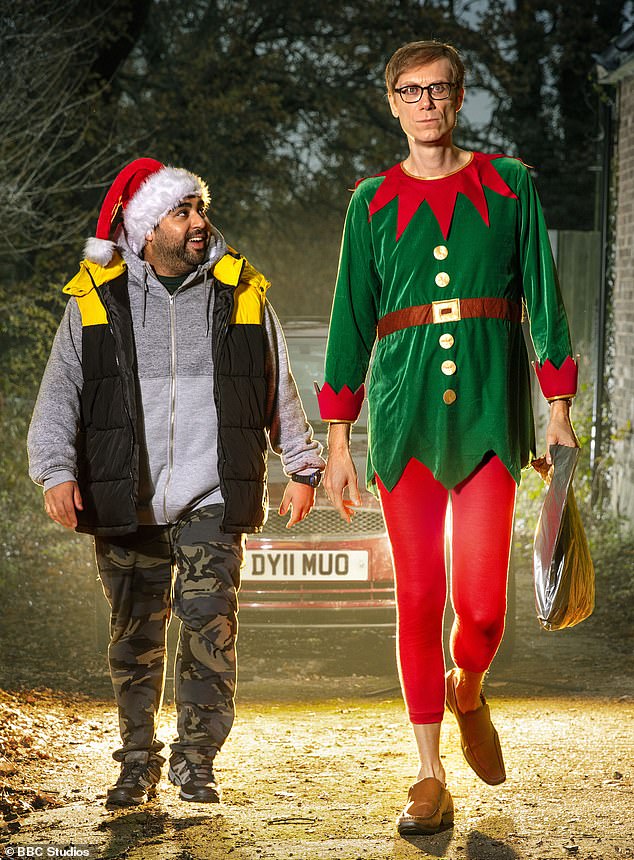 Click And Collect, a sweet-hearted comic road trip that sees mismatched neighbours Stephen Merchant and Asim Chaudhry driving the length of Britain to buy the country’s most-wanted toy for a little girl

CHRIS AND MICHAELA: UNDER THE CHRISTMAS SKY

Tracking down natural seasonal wonders, Chris Packham and Michaela Strachan traverse the globe from deserts to the Arctic.

The Valco gang reassemble for Jason and Cheryl’s wedding in the last-ever instalment of the supermarket sitcom.

THE QUEEN AND I

After a political revolution, the Queen goes to live on a council estate. Samantha Bond and David Walliams star in this adaptation of Sue Townsend’s comic novel.

The traditional Christmas run of the classy quiz pits celebrity alumni against one another. Episodes air every weeknight until January 4. 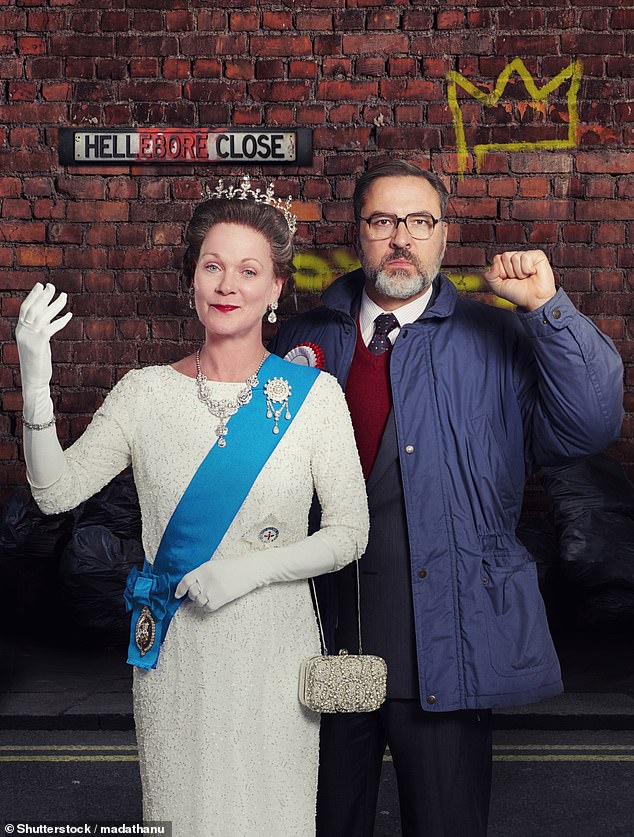 The Queen And I. Samantha Bond and David Walliams star in this adaptation of Sue Townsend’s comic novel 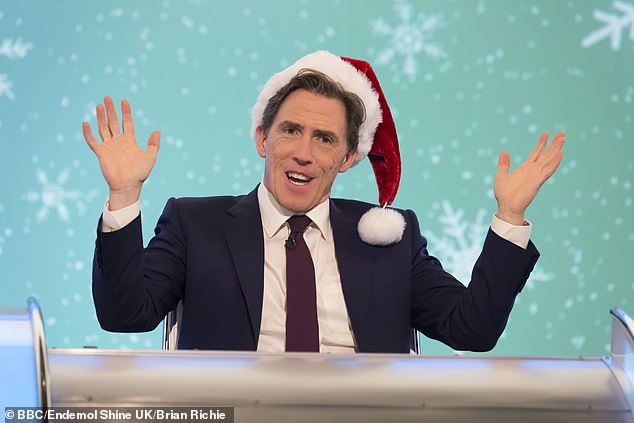 Would I Lie To You? At Christmas. Lily Allen, Noddy Holder and James Acaster join the panel show for a spot of festive fibbing 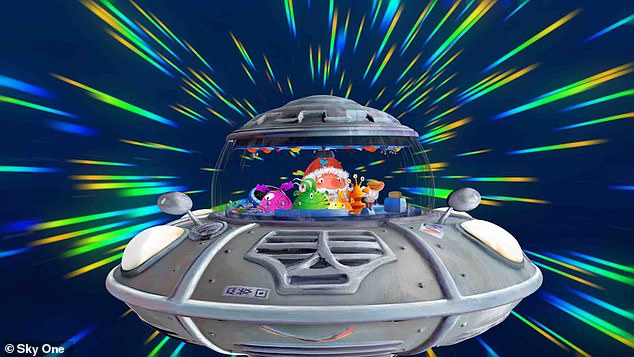 A sweet-hearted comic road trip that sees mismatched neighbours Stephen Merchant and Asim Chaudhry driving the length of Britain to buy the country’s most-wanted toy for a little girl.

WOULD I LIE TO YOU AT CHRISTMAS

Is a radio host being haunted? Simon Callow stars in a Christmas ghost story from the pen of Mark Gatiss.

Her Majesty’s annual address reflects on a year that has seen her family celebrate a birth, two weddings and a pregnancy.

Can Zog graduate from dragon school by capturing a princess? The latest treat from Gruffalo creators Julia Donaldson and Axel Scheffler is narrated by Lenny Henry, with Hugh Skinner as the voice of Zog. 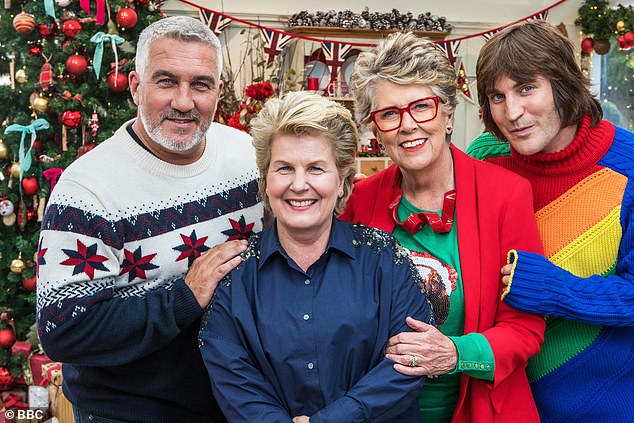 The Great Christmas Bake Off. Expect Hollywood handshakes aplenty as a quartet of contestants from years past knead it out for the title of Christmas Star Baker

Caroline Flack, Aston Merrygold and Ann Widdecombe are among the celebs sashaying back onto the dance floor for this sparkly festive special.

Soprano Katherine Jenkins performs and Sky football pundit Chris ‘Kammy’ Kamara plays Send To All with his phone as the over-the-top comic presents festive fun and games from the stage of the Theatre Royal, Drury Lane.

Helen George returns as Trixie, but she’s not Nonnatus House’s only visitor. There’s Sister Mildred (Miriam Margolyes) too, not to mention the orphans she’s brought from China…

THE GREAT CHRISTMAS BAKE OFF

Expect Hollywood handshakes aplenty as a quartet of contestants from years past knead it out for the title of Christmas Star Baker. The show returns for a second special on New Year’s Day at 7.40pm. 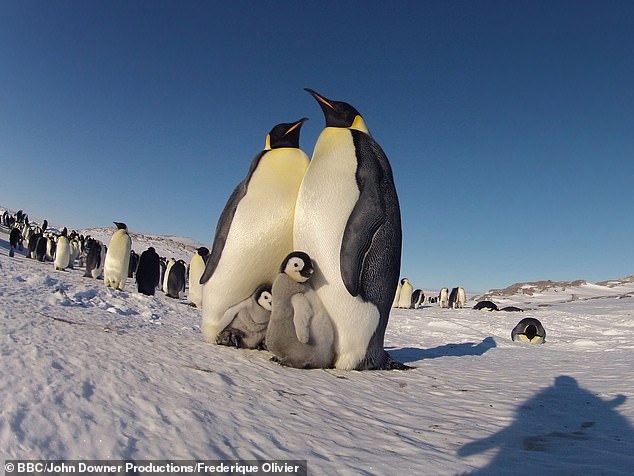 Spy In The Snow. Lenses in fake snowballs, a model sea otter and a cheeky spy parrot are just a few of the sneaky hidden camera tricks that the Beeb uses to get up close and personal with an array of wild animals as the ground-breaking wildlife show returns for a special one-off 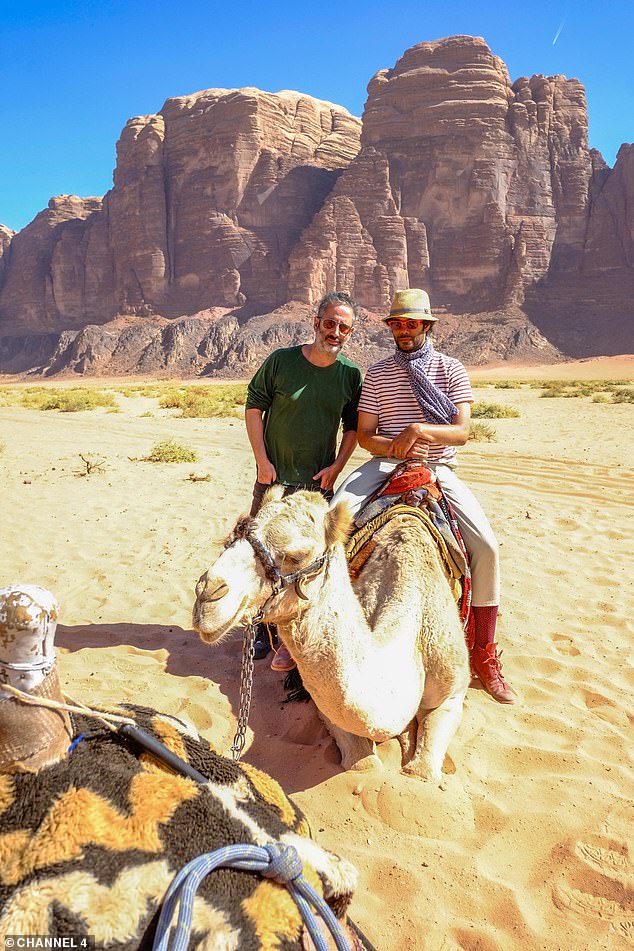 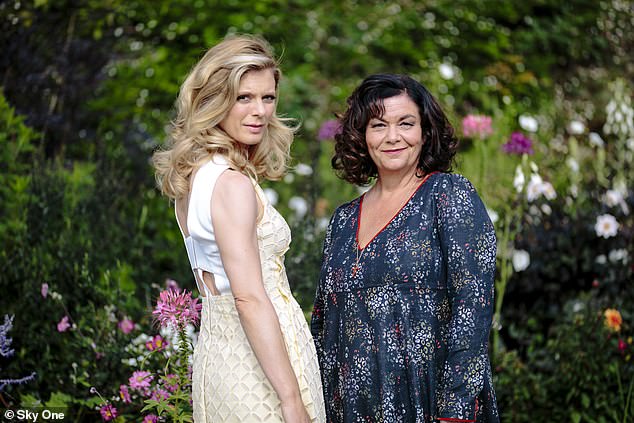 Delicious. Vincent Regan joins the cast playing a dashing former chef as the foodie drama returns for a third run. Emilia Fox and Dawn French star as the restaurateurs with spectacularly complex personal and professional lives

The Shakespearean sitcom gets a Dickensian makeover as Will (David Mitchell) arranges for a miser to be visited by a trio of ghosts. Kenneth Branagh, Lily Cole and Mark Heap co-star.

The story of gold medal-winning ice dancers Jayne Torvill and Christopher Dean gets the full biopic treatment. Will Tudor and Poppy Lee Friar play the skaters, with support from Anita Dobson and Stephen Tompkinson.

The Irish mammy returns for a brace of festive specials. This first one sees Agnes (Brendan O’Carroll) battling in a Christmas decorating contest. Then on New Year’s Day (10pm) she’s back to give a funeral speech for a neighbour she barely knew.

Join the colossally camp comedian in his Alpine lodge as guests including Channing Tatum, Lily Allen and Russell Howard drop in.

A boy joins a band of kids for late-night adventures in a hospital. The latest fun and heartwarming adaptation of one of David Walliams’s hit novels.

KEN DODD: HOW TICKLED WE WERE

This homage to the king of the tickling stick (who died in March this year) is crammed with clips and interviews.

THE SNOW WOLF: A WINTER’S TALE

Can a she-wolf get her six baby cubs to safety across the bleak wilderness of northern Italy’s Dolomite mountains? Mortal peril rubs shoulders with incredible cuteness in a fine wildlife film.

Richard Ayoade’s latest celebrity city break sees him recruiting comedian and writer David Baddiel for a 96-hour trip to Jordan. Together they head off in search of gold, frankincense, myrrh and everything else that the city has to offer.

TAKE THAT: WE’VE CO ME A LONG WAY

With exclusive behind-the-scenes footage from their early days shot by the band themselves, this celebration of 30 years in the music industry sees all of Take That (yes, even Robbie Williams) reassemble to chat about their lives and music.

BILLY CONNOLLY: MADE IN SCOTLAND

Tracing the Big Yin’s rise from worker in a Glasgow shipyard to comedy superstardom, this two-part profile features interviews with the man himself, plus Eddie Izzard, Tracey Ullman and Lord Grade. Concludes on Friday January 4.

Vincent Regan joins the cast playing a dashing former chef as the foodie drama returns for a third run. Emilia Fox and Dawn French star as the restaurateurs with spectacularly complex personal and professional lives.

THE LONDON STUDIOS: HOME OF THE STARS

Holly Willoughby, Danny Baker and Dickie Davies are among the stars remembering the London Studios as Dermot O’Leary presents a look back at the filming location that housed everything from Blind Date and Upstairs Downstairs to World Of Sport.

Dominic West, David Oyelowo and Lily Collins star in this intense and cinematic six-part adaptation of Victor Hugo’s epic novel. With a script by Andrew Davies, this gives a sharp and modern feel to a decade-spanning 19th-century drama.

SPY IN THE SNOW

Lenses in fake snowballs, a model sea otter and a cheeky spy parrot are just a few of the sneaky hidden camera tricks that the Beeb uses to get up close and personal with an array of wild animals as the ground-breaking wildlife show returns for a special one-off. It’s chock full of sweetness and drama in equal measure, from a polar bear cub playing with a snowball to emperor penguins seeing off a giant petrel taking an interest in their chicks.

The extraordinary career of illustrator and storyteller Raymond Briggs comes under the spotlight as famous fans explain the genius of the man behind The Snowman (below). 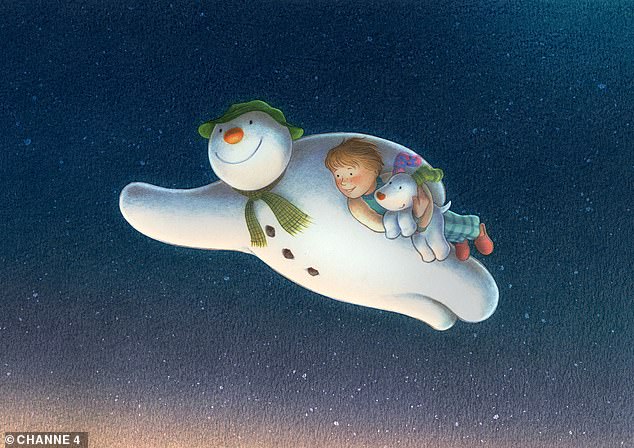 THE LAST LEG OF THE YEAR

A New Year’s Eve tradition since – wait for it – 1993, the annual musical extravaganza may be a quarter of a century old now, but it shows no signs of flagging. Mr Holland has assembled yet another incredible line-up to see in 2019. George Ezra, Michael Bublé, Marc Almond, Ruby Turner and Jess Glynne are all on the bill.

Suggs and the rest of the nutty boys take to the stage at Westminster Hall to play in the New Year with hits such as Our House, Baggy Trousers and My Girl. They’ll break for the midnight bongs and the fireworks over the Thames, then return for an encore.

The Most Reverend Justin Welby offers his thoughts on the importance of communities as a source of hope in an uncertain world.

Don’t let the lack of a Christmas Day special get you down as the Time Lord returns for this New Year’s Day episode instead. The Doctor and her crew find themselves confronted by a terrible menace from Earth’s past. Fresh Meat’s Charlotte Ritchie and Indian Summers’ Nikesh Patel guest-star in the only episode we’ll see in 2019.

The big man is back after a three-year break. Idris Elba returns as DCI John Luther just in time to face a horrible new string of murders across London. Can he solve them? And what will it cost him to do it? The drama continues every night this week until Friday.

WHO WANTS TO BE A MILLIONAIRE?

Who wants to be a millionaire? Well, everyone facing Jeremy Clarkson in the quiz chair this week. After a run posing questions to celebs earlier this year, the former Top Gear frontman is let loose on members of the public for the first time. There’s an episode on each day this week.

On demand box sets to binge on

Ahead of the New Year’s Day special, catch up with all of Jodie Whittaker’s adventures in the Tardis.

Hugh Grant and Ben Whishaw star in the critically acclaimed drama about the Profumo scandal. 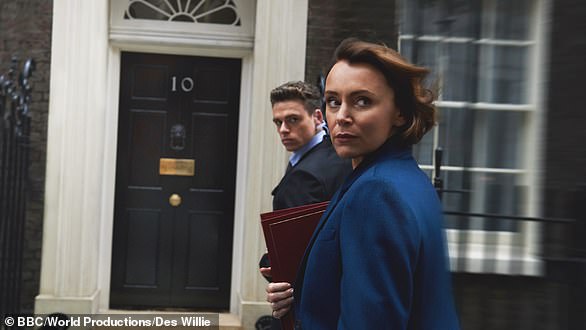 From baby penguins to painted wolves, David Attenborough’s latest is another wildlife spectacular.

Ruth Wilson plays her own grandmother in this post-war spy thriller set in the years just after World War 2.

With series five due in 2019, it’s time to catch up on the top-drawer police thriller.

The second half of the seventh and final series airs soon so why not head back to the very beginning of the fantasy epic?