Firsts, she conquered Broadway and television. Now, the actress whizzes into the MCU in Chloé Zhao’s Eternals. 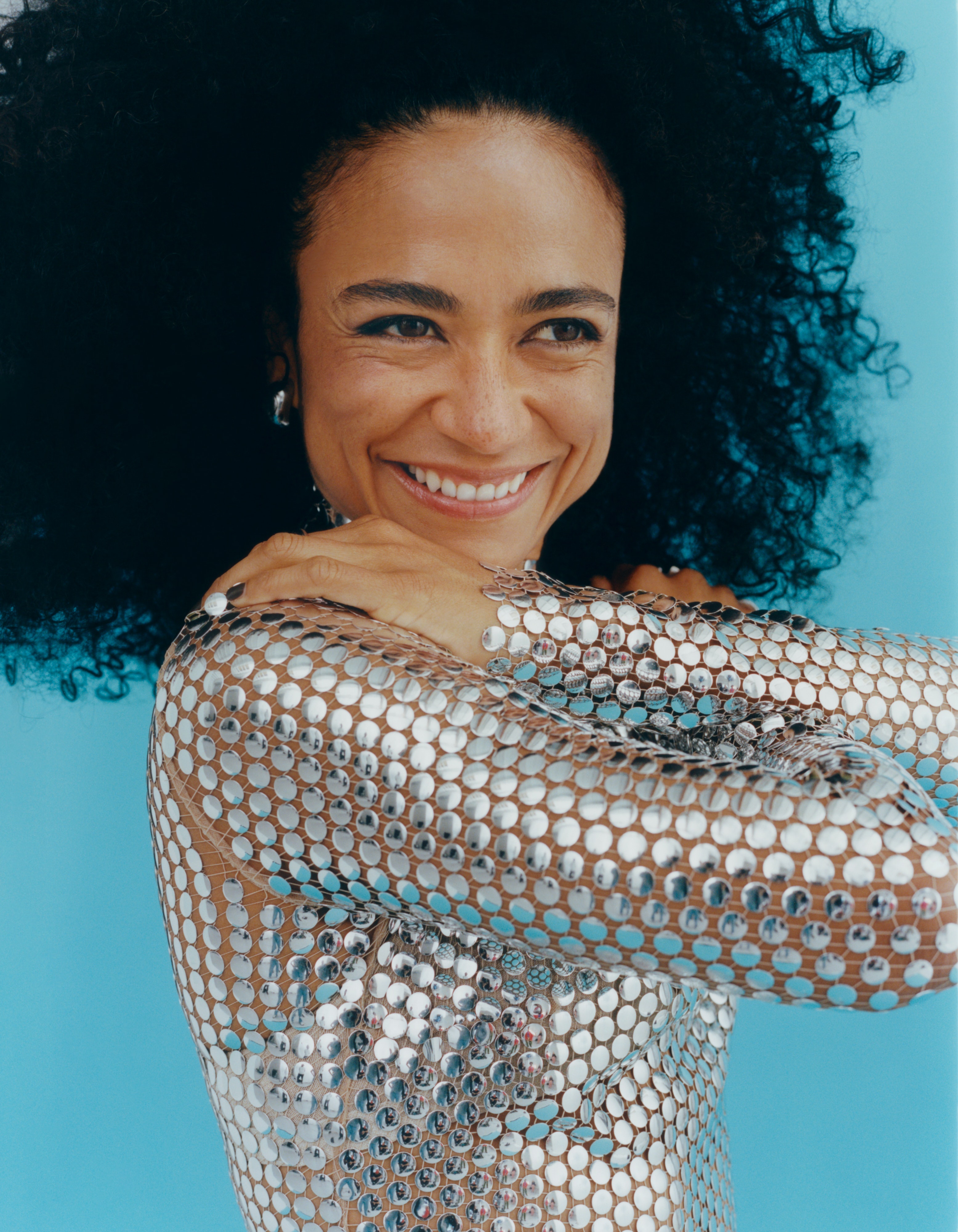 Lauren Ridloff can’t tell you the number of times she’s been asked how it feels to be the first deaf superhero in the Marvel Cinematic Universe. The performer, who brings to life the superhuman speedster Makkari in Chloé Zhao’s Eternals, has been on a whirlwind of a press cycle for the past couple of weeks, and it’s a question she’s received a lot.

“It’s been a good opportunity to take control of that narrative. [But] I wish people would ask me, ‘What was it like working with Chloé?’ or ‘What’s the most important message in the movie?’” Ridloff explained during a recent Zoom call, along with her interpreter. “They also ask me about American Sign Language, which I’m very proud to showcase. At the same time…there’s so much more to the deaf experience than being a signer. It’s how to live in a space that is for a world which is auditory. How do you share that space? I’m really interested in talking about those things.”

So what was it like working with Zhao, the director primarily known for western drama The Rider and the Oscar-winning Nomadland? Ridloff says she and the Eternals filmmaker actually connected quite early, long before filming, when she assigned Zhao a name in American sign language. “In the deaf community, we give people name signs based on their quirks or characteristics. So it means you can’t really give someone a name in sign language without knowing them, and it’s a rite of passage that you are connected to the deaf community or at least one deaf person,” Ridloff explains.

During Ridloff’s second time meeting Zhao, she was especially struck by her grounded presence. “I think she was probably burning Palo Santo, and it might have been in an office, but it really felt like a sanctuary. The lights were dimmed. She was sitting on the floor,” the actress remembers of the director. “She’s like, ‘Come in, come sit with me,’ and she didn’t have any shoes on and she’s sitting cross-legged on the floor and that’s her, that was her name sign. Her name sign basically means ‘cross-legged on the floor.’ It just shows in a really visual way that she’s super down to earth.”

Ridloff wears a Givenchy dress and stylist’s own tights.

Eternals touts a cast of actors from all sorts of varying identities and backgrounds, and while that quality of the big budget flick is noteworthy and worth celebrating, there’s always the catch-22 of the discussion around that diversity potentially flattening its power. For Ridloff, who is also a multiracial, Black and Mexican woman, and mother of two, there’s much more to her than just her deafness.

“Everyone has different identities and different characters that live within them. How we talk about where our identities intersect is the question of the moment,” Ridloff says. “How I talk about my experience is [by] asking myself how I honestly identify with one part of me without deflating another part of me. How do you choose which one to address first? This conversation is ongoing and it needs to keep going.”

The 43-year-old actress was born in Chicago, Illinois and during her teen years, she attended Model Secondary School for the Deaf in Washington, D.C. Becoming an author was her first dream, and long before she majored in English at California State University, Northridge, Ridloff would spend her time writing. In fact, she was such a huge fan of Stephen King growing up that she wrote a horror story for a school assignment that was so graphic it resulted in a parent teacher conference. While the adults in her life were a bit disturbed by the content of the story, it was impressively written, and Ridloff was proud to pull off a feat of storytelling.

Years later, in 2018, her career shifted. While working as an American Sign Language tutor on the revival of the Tony-winning play Children of a Lesser God, Ridloff substituted for the lead role during a read-through opposite Joshua Jackson. Director Kenny Leon was so floored by her performance that he offered her the role on the spot. Suddenly, the theater became her bootcamp as she made her foray into the world of professional acting. Ridloff says the learning curve has been steep, to say the least, especially with her baptism by fire happening in a very public way once the production moved from a pre-run and onto Broadway.

“The first scene, I’m standing [and] sobbing. First scene on Broadway ever, I had to bring up every emotion and be mentally prepared to be inside of that character space off the bat,” she says. She adapted quickly, with her performance earning her a Tony nomination for Best Actress in a Play, and when she was cast as Connie on the zombie apocalypse series The Walking Dead, she took some of the lessons she learned from the stage and applied them to being on set. “Transferring that to television and The Walking Dead was more about access issues and support and resources in terms of what production needed from me and what I needed from production,” she remembers. “That was a learning experience in itself.”

Feeling more confident to have an open dialogue about her specific needs also helped the actress on the set of Eternals. Ridloff remembers that after a day of shooting, the cast attended a holiday party together, and she was speaking with castmate Angelina Jolie about the difficulty of being cued during some scenes in which she starts off by facing a wall. Jolie suggested using a laser pen that the special effects team could erase during post-production, and voila: a solution was presented.

Watch our film with Lauren Ridloff below, directed by Lea Winkler with cinematography by Jimmy Nyeango.

Ridloff has been a runner for years, but she says pulling off her Eternals character’s main power was a whole different hurdle behind the scenes. Makkari is characterized by her superspeed, which she uses to plummet into foes and dash all over the world in a matter of seconds. To give the appearance of superspeed on camera, Ridloff had to sprint on a contraption dubbed the Travelator, which is essentially an oversized treadmill. This was no typical morning jog—instead, the performer did dozens of tests at different speeds, all while confined to her superhero suit—but when she was finally able to see this bit of movie magic executed on screen, she says she was happy that everything came together “beautifully.”

In the film, the Eternals are a group of ancient immortal beings who have discreetly (for the most part) integrated themselves within Earth’s societies for millennia, forbidden from interfering with all of the man-made tragedies that have unfolded the entire time that humans have populated the planet. Makkari can see the whole world in just a matter of moments, so it’s understandable that the character might get a little bored in the universe of the film. In the time between when the Eternals are excused by group leader Ajak (Salma Hayek) from their fight against the Deviants, creatures that threatened the human race, and when Sersi (Gemma Chan) gets the group back together centuries later, the speedster spends thousands of years collecting famed artifacts and pieces of history. Ridloff guesses that if she had the same habits in real life, she would take from La Casa Azul, the renowned blue house in which Frida Kahlo lived for most of her life, and which has now been turned into a museum honoring the legendary artist.

Despite the overlap in aesthetics between the actress and her character, Ridloff’s iteration of Makkari differs slightly from the version of the character that was depicted in the comics for many years. In The Eternals comic books from 1976, the character is introduced as Makarri, a white male with blond hair. But the swapping of the character’s race and gender, and slightly adjusted spelling of his name, are not the only differences in Ridloff’s version—her performance of Makkari demonstrates the concept of Deaf Gain, which challenges the position that deaf people are operating from a space of lack and focuses on their benefits. She has the ability to sense vibrations, much like how the deaf community experiences music through vibrations, and her sonic booms (produced as a result of running at hyper-speed) do not affect her. Ridloff says she is thrilled to see the term discussed in mainstream culture.

“When I was a teenager, I was first exposed to a saying: ‘Deaf people can do anything except hear.’ But that quote has really evolved. And today that’s Deaf Gain. We’re lucky to be the way we are,” she says. “It’s not a woe-is-me situation. It can be, but it’s just like any other identities—sometimes you’re like, ‘It’s not easy being X.’ The whole world is set up to serve a specific group of people, which means if you’re not in that group, you’re not being served a lot of the time,” she goes on. But for Ridloff, being deaf can have many advantages, one of which she says half-jokingly, is sitting next to a crying baby on a plane and being unbothered. “I’m like, ‘Sure, because I’m not going to hear them,’” she says. “That’s Deaf Gain.”

Ridloff’s schedule continues to stay packed with appearances and commitments as Eternals zooms into theaters on November 5. However, she already has her sights set on what she’ll do when she can finally take it easy after months of physical training, press cycles, and attending premieres. “I’m really looking forward to my trip to Mexico. I’m going on holiday with my family to celebrate my father’s retirement,” she says, relaxed. “I cannot wait to have a piña colada.”