Edgar Hilsenrath, a German-Jewish survivor of Nazi persecution who unsentimentally stoked the embers of the Holocaust with brutally satirical autobiographical novels, died on Sunday in Wittlich, Germany. He was 92.

His death was announced by his French publisher, Le Tripode.

Mr. Hilsenrath finished his first novel, “Night,” after emigrating to New York in 1951 as a refugee from war-torn Europe. (He lived in New Yorkuntil 1975.) Published in English in 1964, the novel was inspired by his dehumanizing captivity in a Jewish ghetto.

He also wrote a celebrated farce, “The Nazi and the Barber” (1971), which tells the story of an SS officer and mass murderer who kills his Jewish best friend from childhood, assumes his identity, flees to Palestine and is transformed into an ardent Zionist.

“To write grotesque things is my way of laughing at death,” Mr. Hilsenrath told Le Figaro, the French newspaper, in 2012.

Having witnessed and withstood many of the horrors of the Holocaust and its aftermath, Mr. Hilsenrath un-self-consciously challenged more conventional and deferential post-World War II accounts about the victims of Nazi atrocities. He said his goal was to balance the “great and weighty voices” of historians with the “little chattering voices” of ordinary Jews.

“In Germany people want to make up to the Jews for what happened by idealizing them,” he told the German newsweekly Der Spiegel in 2005. “The Jews in the ghetto were every bit as imperfect as human beings anywhere else.”

If readers criticized him for portraying some Jews in “Night” as “suspicious, miserable and mean,” he said, “it is not the Jews that I was describing, but rather the poverty of the ghetto.” 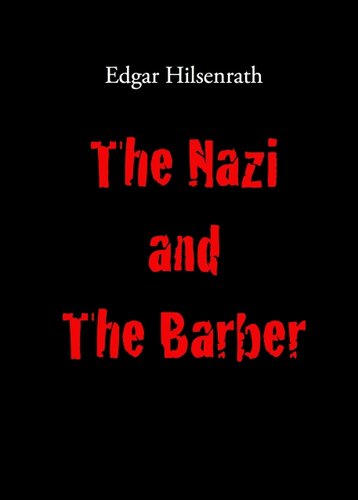 As a result, his early manuscripts were initially rejected by scores of German publishing houses and generated mixed reviews.

But in 1977, when “The Nazi and the Barber” was finally published in Germany, the Nobel laureate in literature Heinrich Boll, writing in Die Zeit, another German weekly, praised the novel’s “gloomy and quiet poetry.”

In 2016, the critic Helmut Bottiger wrote in Süddeutsche Zeitung, a Munich newspaper, that the novel was “undoubtedly one of the most important in the history of the Federal Republic.”

Mr. Hilsenrath began his novel “Jossel Wassermann’s Return” (1993) with the wind whispering to a rabbi as it rushes past the window of a train deporting Jews from an Eastern European shtetl.

“Yes, you are perfectly right,” the rabbi says, nodding to the wind in agreement. He adds:

The rabbi replies: “Our stories. We took them with us.”

Mr. Hilsenrath was born on April 2, 1926, in Leipzig, Germany, the son of David Hilsenrath, a furrier, and Anna (Honigsberg) Hilsenrath. He was raised in Halle, in the east-central part of the country. By 14, he later recalled, he knew he wanted to be a novelist.

Shortly before the Nazi violence against Jews on Kristallnacht in 1938, Edgar’s father fled to France and sent 12-year-old Edgar, his brother and mother to live with his grandparents in Siret, Bukovina (now part of Romania). As the only Jewish student at his school, he was harassed and transferred to a parochial school.

Three years later, after the territory was retaken by Romanian troops aligned with the Germans, the family was deported to the Moghiley-Podolsk ghetto in what the Romanians called Transnistria (now part of Ukraine), until it was liberated by the Russians in 1944.

Typical of Mr. Hilsenrath’s unconventional storytelling, a blend of dread and drollery, was his account of how he started smoking. He was 17 at the time and had been captured shortly after escaping from the ghetto.

“The soldiers put us in front of a machine gun,” he told the German daily newspaper Der Tagespiegel in 2006. “But they got scared because the Red Army approached.” With the firing squad disbanded, one soldier offered him a cigarette.

“I’ve been smoking since then,” Mr. Hilsenrath said.

To avoid being drafted into the Red Army, he fled with forged documents on a refugee train to Palestine, where he worked on a kibbutz (and caught malaria). He was reunited with his family in France in 1947.

After arriving in New York in 1951, he worked as a waiter and a porter while writing fiction. He later became a United States citizen but returned to Germany in 1975 because, he said, he was feeling lost surrounded by speakers of a foreign language.

His first wife, Marianne, died in 2004. His survivors include his second wife, Marlene Hilsenrath, who told the German news media that he died of pneumonia.

In “Night,” which became a huge success in Germany a decade after it was published in English, Mr. Hilsenrath wrote about the most difficult conditions in the ghetto, in part, he suggested, out of a “guilty conscience.” Because he worked as a toolmaker, his family had been spared the worst.

“Did you really feel guilty because things weren’t as bad for you as for others?” the Der Spiegel interviewer asked him.

“I felt guilty,” Mr. Hilsenrath replied, “because I survived.”