Dr Andrew Smith, from Buckinghamshire, appeared on the Channel 4 programme last night, alongside his wife Margretta and their children Jasper and Imogen, as he set out to construct the UK’s first self-heating house with £300,000 in 18 months.

The energy conservationist built the property with a concrete base, walls and roof, with the warmth of the summer sun stored in insulated earth banks over and around the house. He hoped the heat could then be radiated back into the rooms of the home throughout the year.

But viewers questioned how sustainable Andrew’s choices for the home were, with one saying: ‘That’s an awful lot of plastic and polystyrene for an eco house. I know it’s not single use because it’s part of the building but still – are there no eco-friendly alternatives?’ 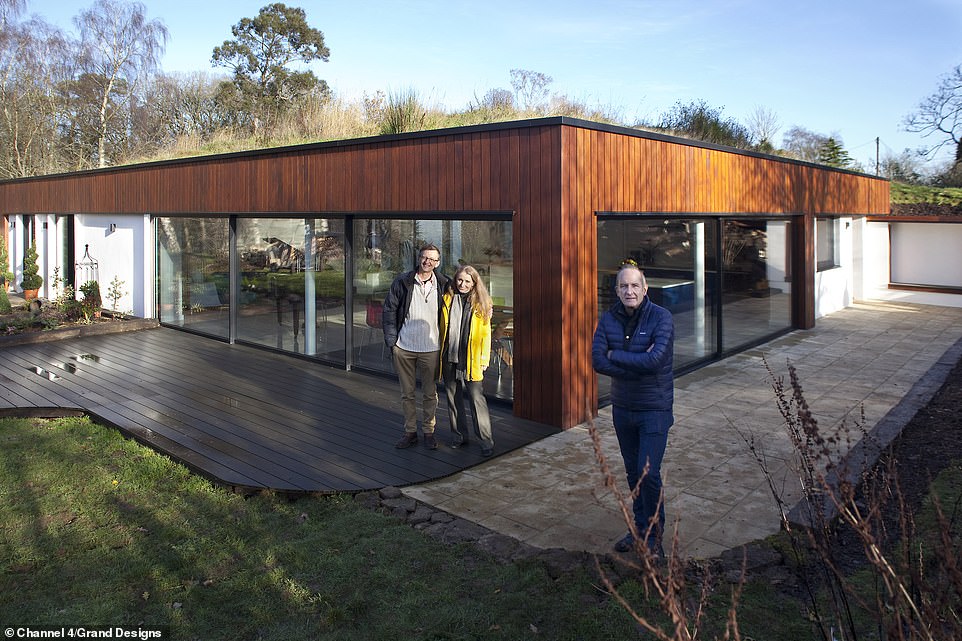 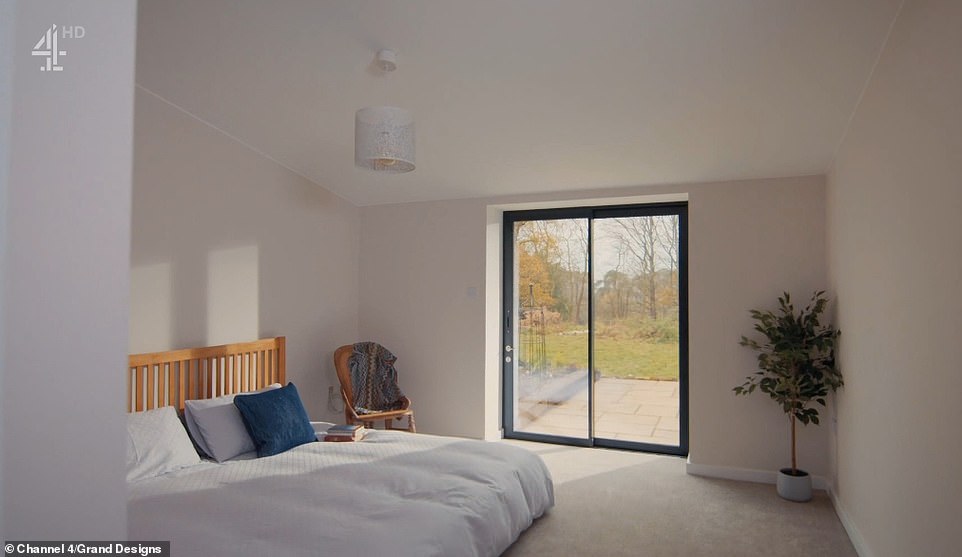 The energy conservationist built his home with a concrete base, walls and roof, and decked much of the property out with brand new furniture (pictured, the master bedroom) 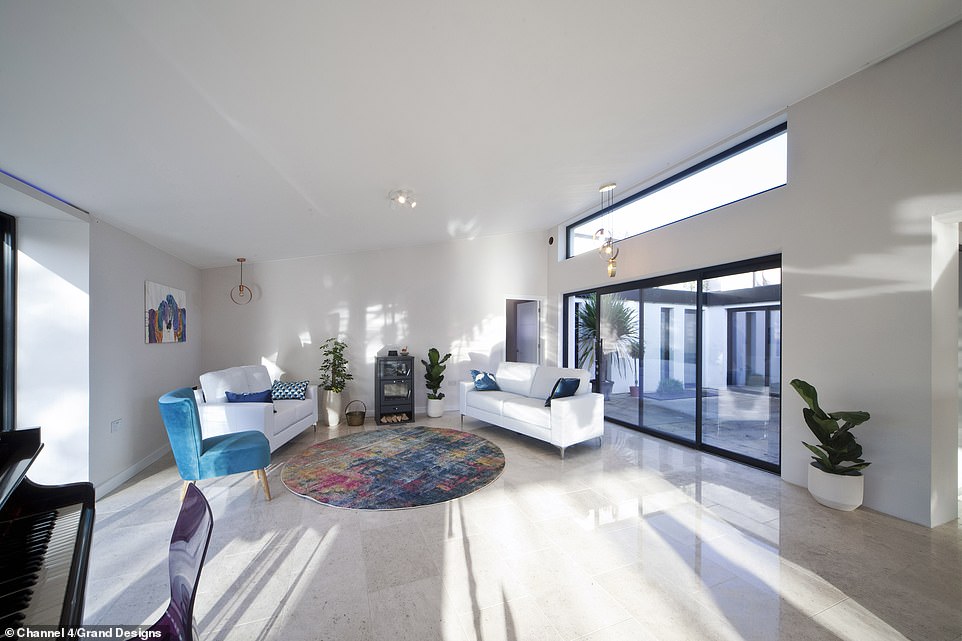 The self builder wanted to construct the UK’s first self-heating house, with the home warmed by banks of soil piled across its sloping concrete roof

Another wrote: ‘He’s not an ECO warrior. He’s an ego warrior. And I suspect soon to be single, sorry Andrew.’

Andrew and Margretta were living in a stunning countryside cottage that he had inherited from his parents when they decided they wanted to build themselves a new home.

While Margretta, who was a full-time mother home schooling their children, wanted a  contemporary and beautiful house, Andrew’s focus was primarily on his gigantic thermal experiment.

Margretta said: ‘Andrew is an eco-warrior, I am less so. I’m surrounded by stuff that I wish we’d be able to pass on.’

Andrew admitted: ‘Occasionally I pull stuff out the bin. I probably take eco-living to the extreme.’

His passion was stoked and fuelled by his ambition to build the UK’s first self-heating home, as he revealed: ‘Our new home is going to be essentially one big thermal experiment. I sincerely hope our theory does match up with the practice because my reputation is on the line there.’ 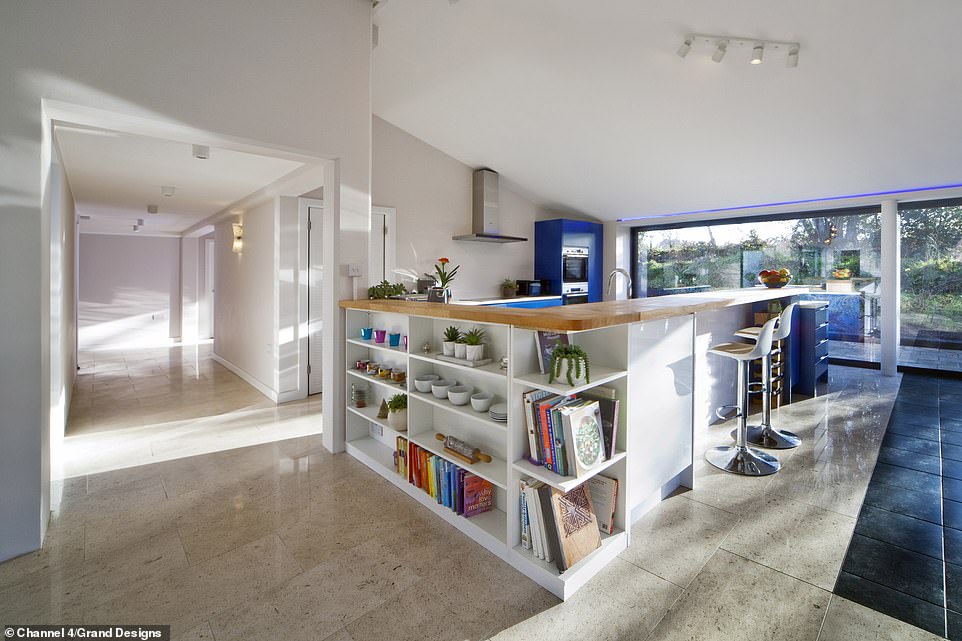 As the property was revealed to Kevin McCloud, he couldn’t help but confess his surprise to see many of the rooms had been decked out with brand new furniture 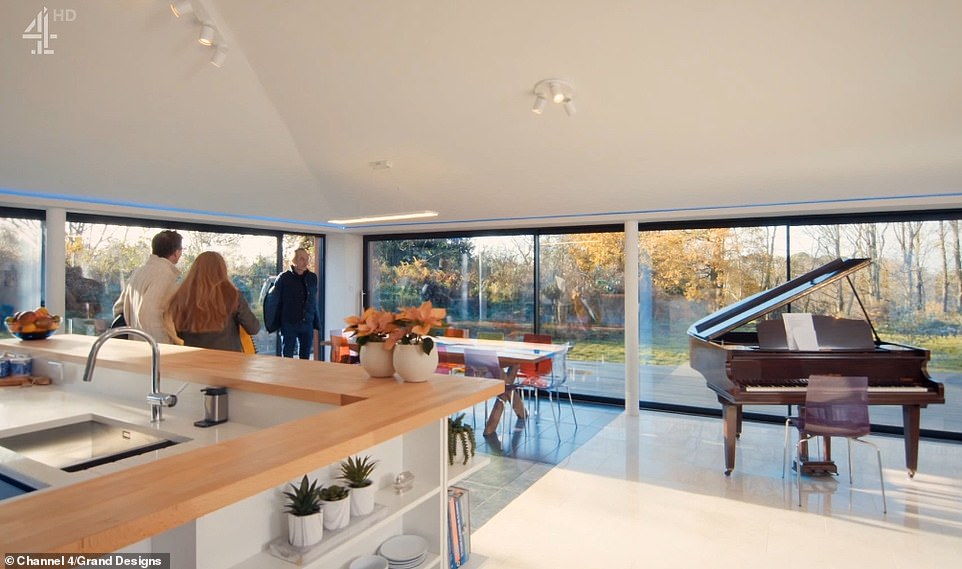 The couple hoped their home would be headed by the warmth of the summer sun year round, with insulated earth banks over and around the house radiating heat into the huge rooms

He planned to store the warmth of the summer sun in insulated earth banks over and around the house, and then draw the warmth back into the living spaces in winter.

The house would have a concrete base and concrete walls, nestled into the earth on two sides, as well as a concrete roof, to absorb the heat, which could then radiate into the surrounding earth and into the rooms of the house.

Andrew said: ‘It will take two years to heat up. We’re going to put a lot of instrumentation out there into the soil to measure the performance.’

His plan saw them cutting into the earth to keep to one side to create a living roof, removing some trees and digging a hole 19 by 19 metres into the ground. 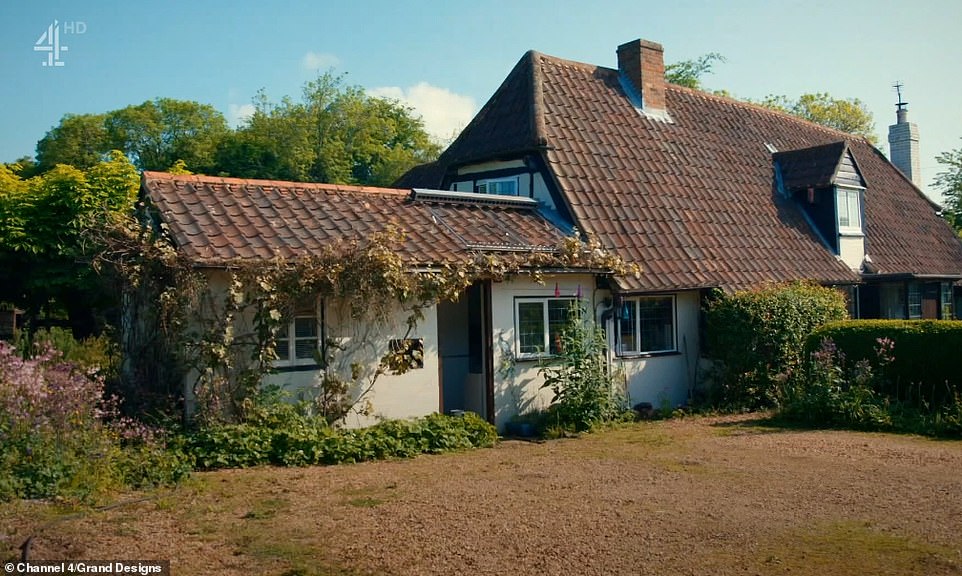 Ahead of the build, Dr Andrew and Margretta were living in their stunning countryside cottage, which had been passed down through the generations in Andrew’s family

Andrew then planned to pour a reinforced concrete slab straight onto the earth, while the walls and roof would also be made out of concrete.

He hoped the house would be damp proof, with tons of earth and sheets of polysterine forming a blanketed bubble of heat retaining soil around the house.

The energy conservationist hoped the earth banks would function as a storage battery with the house acting as a collector, sucking summer heat through its walls and floors and into the earth through a series of pipes.

In winter, it would act backwards – the heat needed would move through the earth, through the concrete and back into the house. 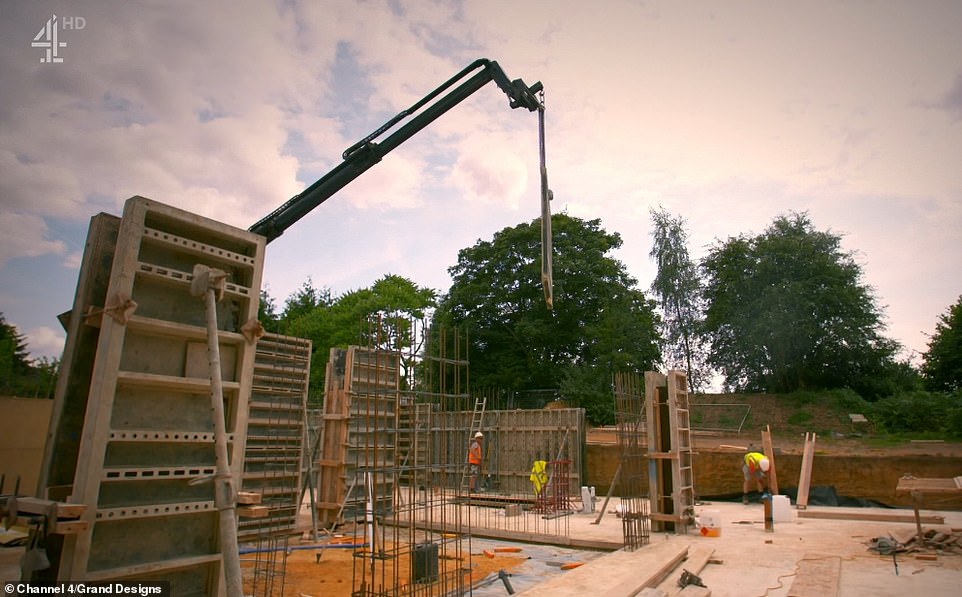 Andrew explained that his ‘neck was on the line’ with the build, which he predicted would cost £300,000 and take roughly 18 months to build.

But before the build could even begin his structural engineer and brother-in-law, Stephen, raised some concerns that the roof could cave in under the weight of the soil above.

Stephen said: ‘The structure we’re designing has to hold up in excess of 500 tonnes of earth over a living area. I don’t think it’s a good idea to go with the precast concrete panels….it could result in literally a collapse.’

Because of Stephen’s worries, the family had to completely change their plan, delaying the build by seven months. 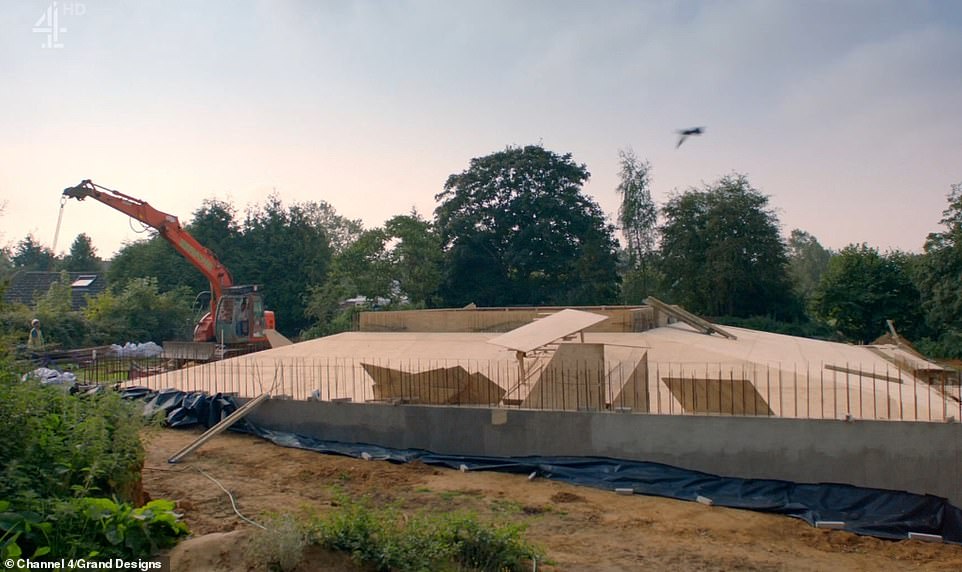 Their new plan meant the concrete would be poured on site, making the roof a rock solid shell with no weak joints – but it was going to cost £40,000 more.

To fund the project, Margretta was forced to return to work, reluctantly confessing she ‘wanted to support the family financially.’

One year into the build, the couple started removing 700 tonnes of soil from the family garden, with Andrew explaining: ‘Most of this will go back around the house.’

After removing the soil, the couple could then start pouring their eco-concrete to create the shell of their home – which was costing them a whopping £100,000. 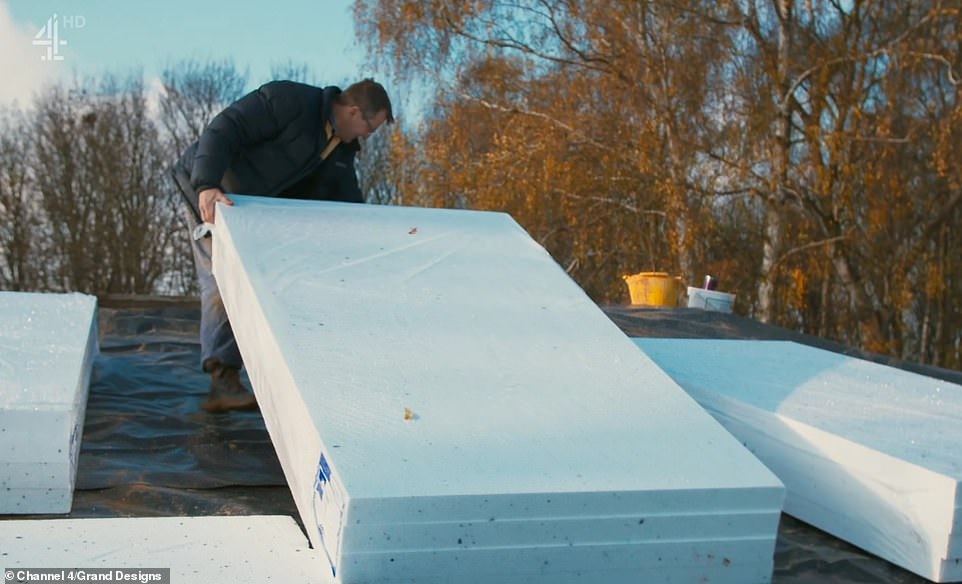 Andrew said: ‘There is a lot of nerves because obviously I’ve never poured concrete before. They will try to do it as quickly as possible because we will be charged for waiting times.’

The foundations and concrete walls began to take shape, with Andrew saying: ‘I’ve got to keep a tight eye on the costs, no hanging around and we’re using everything that is most efficient.’

By August 2018, the builders made real progress, with timber boards lying on top of the structure for the final concrete pour for the critical load bearing roof.

But pouring a concrete roof onto an angled wooden forework would almost have to defy gravity, with Andrew saying: ‘We need to get the concrete wet enough to pour through the pump but dry enough that it doesn’t slump.’ 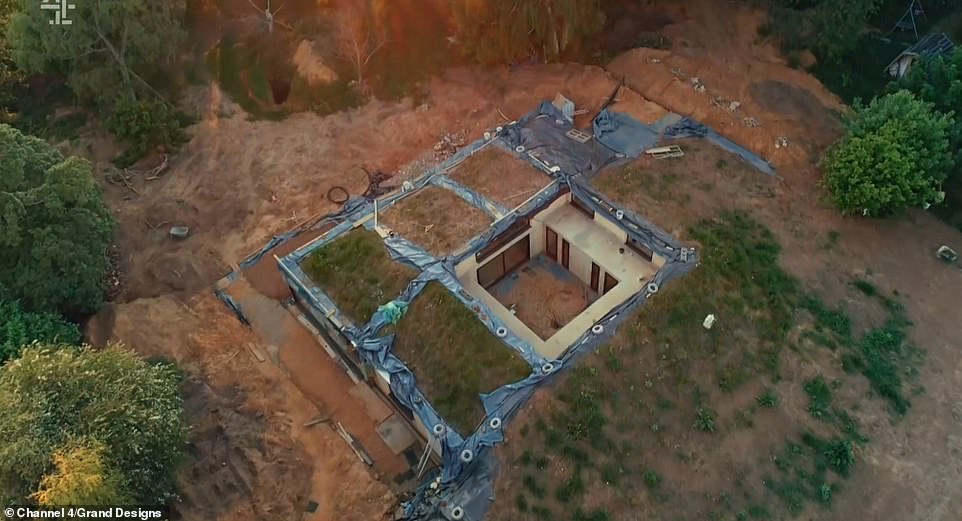 Two walls of the house were embedded into the ground, with enormous earth banks designed to retain the summer sun, while an atrium allowed light to flood in

Andrew admitted: ‘Obviously I’ve never done this before, poured concrete at an angle and that means it’s all going to slump down.’

But it wasn’t not long before the contractors told the scientist that the concrete delivered was ‘too runny’ and wouldn’t stay in place. 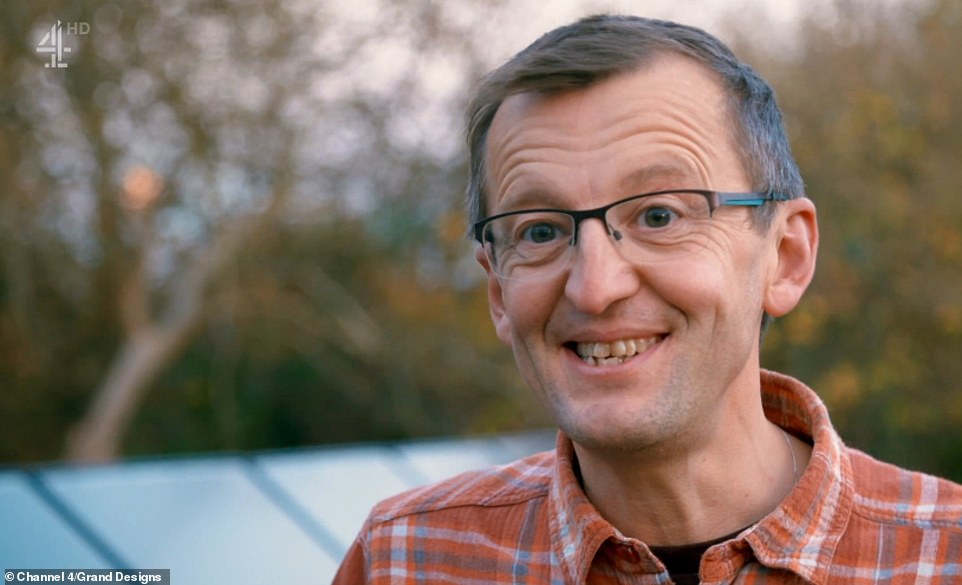 Andrew confessed the £300,000 project would put his reputation as an energy conservationist on the line, and said the family wouldn’t know if the experiment of self heating the home had worked for two years

Despite warnings from the contractor, Andrew decided to give the sloppy concrete a go.

The foreman threw all his men at the task at hand and the group spend the next seven hours struggling to push concrete up hill until the roof was completely finished.

Six weeks later, the roof had dried through, with Margretta calling the new space ‘glorious’ and exclaiming: ‘I can start to visualise how the rooms are going to work.’

But Andrew was less focused on interiors and more interested in piling more earth back on top of the house, confessing: ‘It’s a great feeling because this is the mass that will be heating the house and the earth is free!’ 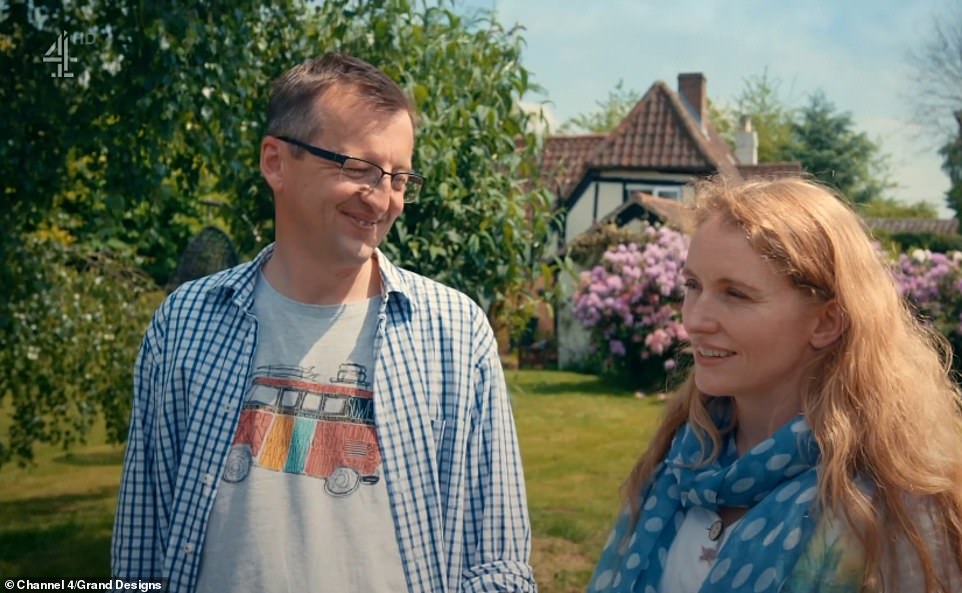 He continued to have some worries about the structure of the build, saying: ‘If the roof was loaded with way too much earth, it would essentially buckle and could collapse.’

After the earth was piled on top of the house, Andrew placed a layer of polythene before a ‘critical’ layer of polysterine onto the roof of his home.

By late spring, Margretta confessed her frustrations were building over the project, revealing: ‘It feels to me a lot like it’s Andrew’s baby. It’s not up to me. I’m standing here painting walls, there’s not much I can do.’

In February 2020, Andrew was nearly two years into what should have been an 18-month-schedule and, keen to keep claw back his £40,000 shortfall, he employed a skeleton team to finish work on the building. 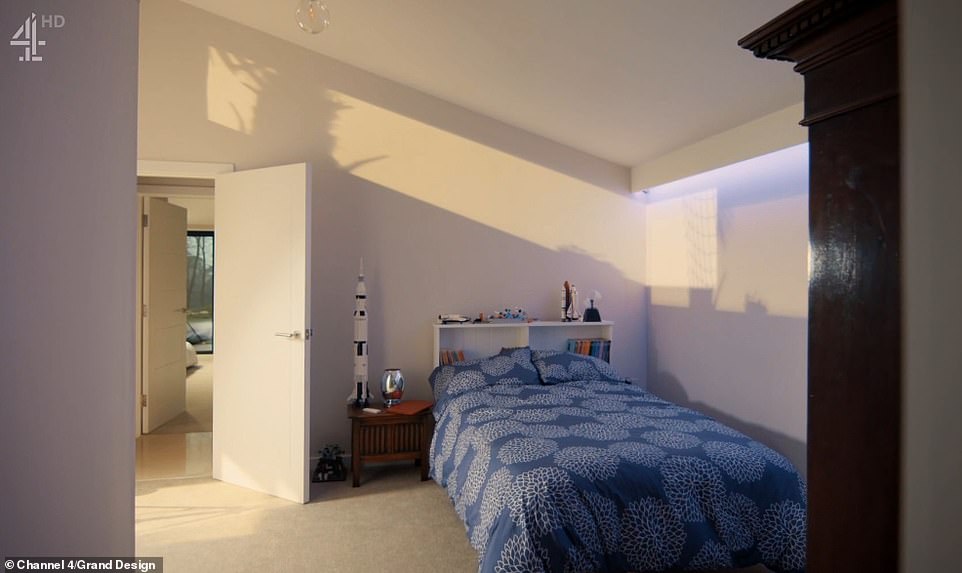 Unveiling their home to presenter Kevin McCloud, the couple confessed they had invested in fresh and new furniture in keeping with the look of the modern home

Progress was slow, with Margretta insisting they invest in almost all new furniture for the home, revealing: ‘Andrew is in slight disagreement with me about [the furniture] but none of this [old furniture] would work well in the new house. It’s a blank slate, it needs to be treated like that.’

When the Covid-19 crisis hit in March 2020, even Andrew’s optimism has dropped, with the energy conservationist saying: ‘My work has been affected, there have been challenges. It’s a tricky thing, hopefully we’ll be alright. Margretta is feeling it a little bit.’

The mother-of-two called the last few months ‘gruelling’, saying: ‘My life has been consumed by this build and I just want it to be over now and get back to normal life.’

By December 2020, three and a half years after they started the build, Kevin revisited the couple to see how they were getting on calling the home ‘remarkable.’ 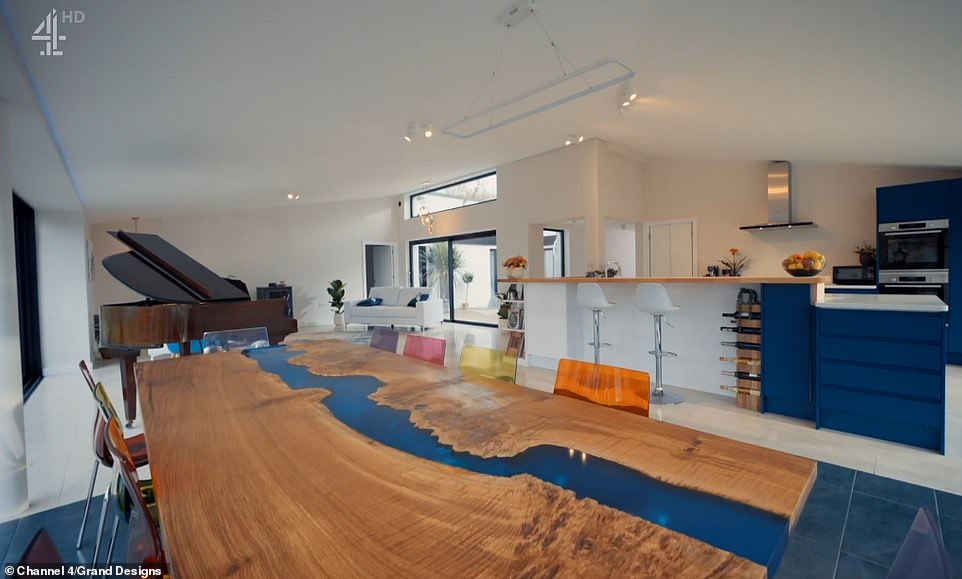 Unveiling their stunning minimalist home, Margretta explained: ‘It’s been a journey to get there but we’ve finally got to this point that we have a home.’

Kevin said the shiny fresh out of the box furnishings surprised him, but Andrew confessed: ‘It’s actually been quite nice, in a funny way. It has been liberating.’

Speaking about the budget, Andrew explained: ‘We started out with contingency £300,000, which got blown almost straight away. But since that point, we’ve just been really careful. But now we’re bringing it in on £310,000.’ 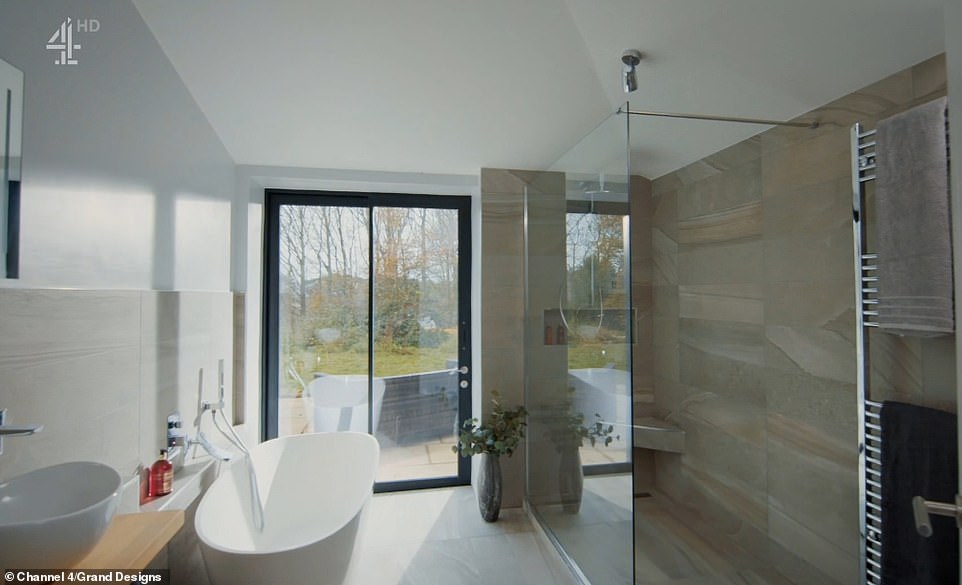 Margretta called the home ‘beautiful’, while Andrew confessed it was ‘quite nice’ and ‘liberating’ to have bought new furniture and fittings for the property

Meanwhile Margretta exclaimed: ‘it’s been a real journey, I just want to live in this beautiful home.’

But despite the couple’s joy over the build, many of those watching questioned just how environmentally friendly the work had been.

One wrote: ‘I’m only 10 minutes in and this eco house is full of very un-eco friendly #Concrete – cement/concrete manufacture is only second to coal as the biggest emitter of greenhouse gasses.’ 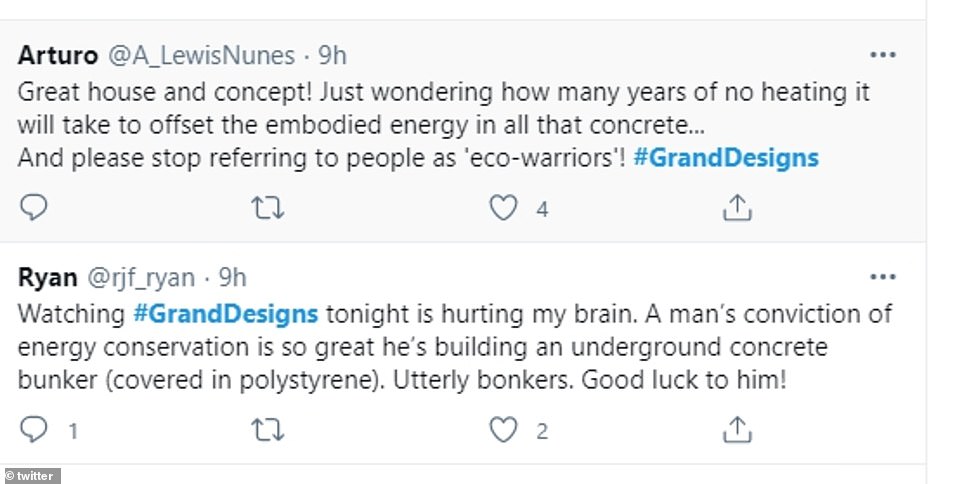 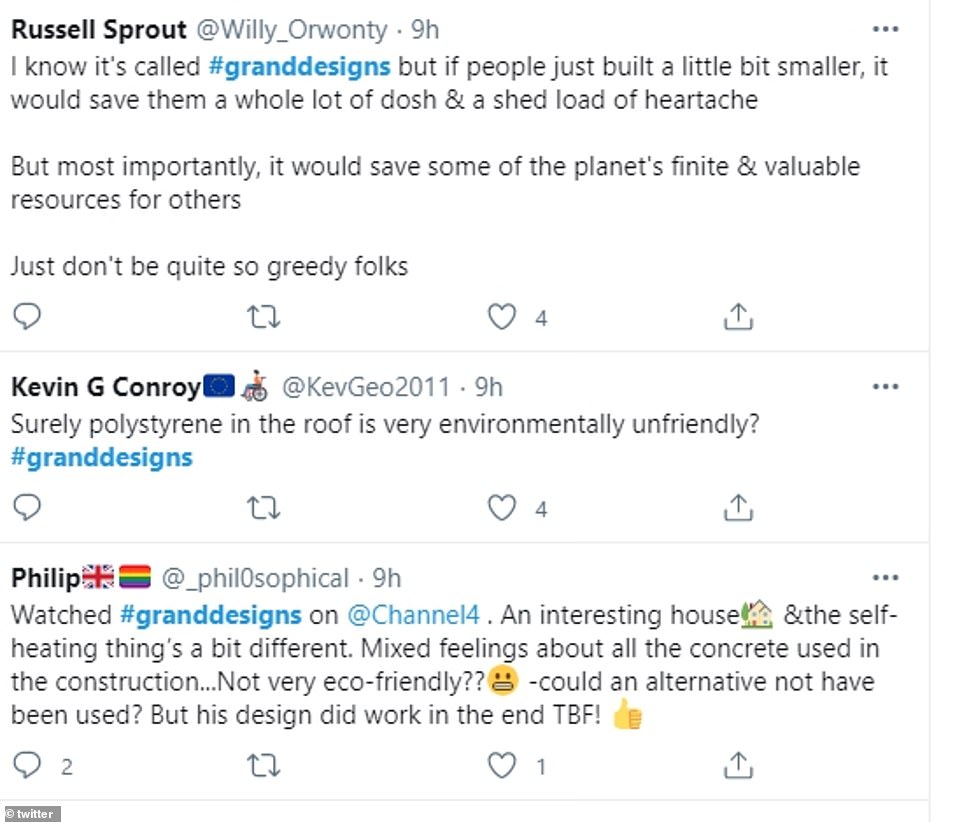 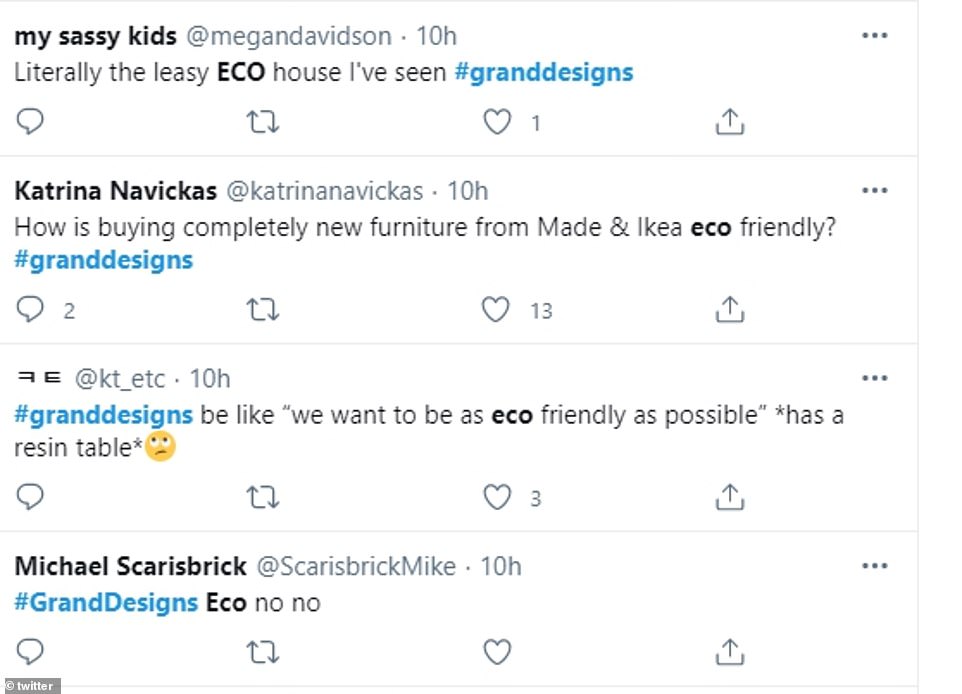 But despite the couple’s joy over the build, many of those watching questioned just how environmentally friendly the work had been

Another added: ‘The only eco thing about this house is the heating system, so much concrete, polystyrene and plastic!’

‘I know it’s called Grand Designs but if people just built a little bit smaller, it would save them a whole lot of dosh and shed loads of heartache,’ one added. But most importantly, it would save some of the planet’s finite and valuable resources for others. Just don’t be greedy folks.’

Another added: ‘An interesting house and the self heating is a bit different. Mixed feelings about the concrete used in the construction – not very eco friendly? Could an alternative not have been used? But his design did work in the end to be fair!’