Air purifiers have been quietly introduced throughout Victoria’s quarantine hotels in the hope the modest measure could drastically reduce the risk of coronavirus leaking from the rooms of infected guests.

The Sunday Age can reveal the portable machines, which remove virus particles from the air, are being placed in rooms where there are groups of people staying and when people are using CPAP or BiPAP breathing machines, which may increase the risk of virus spread.

Airborne spread of coronavirus remains a weak point of the nation’s quarantine system, with a spate of recent instances of the disease escaping hotel rooms, infecting other guests and staff and sparking lockdowns.

Professor Jason Monty, head of mechanical engineering at the University of Melbourne, has been advising the Victorian government on how to make hotel quarantine safer and estimates air purifiers could reduce the risk of these leaks by a factor of 10. 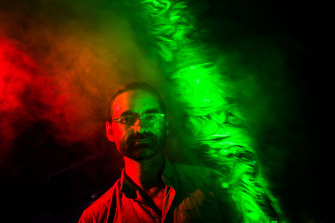 Professor Jason Monty, the head of mechanical engineering at the University of Melbourne.Credit:Justin McManus

He said he believed the introduction of the air filters in Victoria, alongside ventilation audits of quarantine hotels detecting instances of dangerous airflow, now meant the chance of fresh outbreaks in Victoria was “extremely low”.

“It’s impossible to say any one measure will reduce the risk by 100 per cent, but the air purifiers if used correctly, would dramatically decrease the risk ” he said.

“They should be a standard part of the layers of protection for every hotel in Australia.”

New research from the University of Melbourne, co-authored by Professor Monty but yet to be peer reviewed, has found that portable air cleaners with HEPA filtration cleared aerosols from a small room four to five times faster than a normal air conditioning system alone.

The paper recommends the “inexpensive” device, which can be purchased for a few hundreds dollars, be considered for all small enclosed spaces in hospitals, including tea rooms.

A review into ventilation of Western Australia’s quarantine hotels earlier this year recommended the use of mechanical air filters in the rooms of guests who tested positive to coronavirus, but it is unclear if the reform was implemented.

Queensland Health says it uses air purifiers where considered appropriate in the state’s quarantine hotels, while other states declined to say whether they were using the devices or considering it. There are yet to be consistent national standards established for hotel quarantine, despite repeated calls from infectious diseases experts.

Occupational physician and government adviser Malcolm Sim said Australia was now in a unique situation where authorities were able to focus a lot of attention on the cause of a relatively small numbers of locally-acquired coronavirus cases that had stemmed from hotel quarantine.

“We’re fortunate. We’ve got a lot all of the usual prevention measures pretty well entrenched now. So we’re able really double down on those last few cases. Most of the rest of the world doesn’t have that luxury.”

Emeritus Professor Sim said it had become clear that the virus could spread a distance via small particles or aerosols. “I think we know a lot more about that than we did even a few months ago through these cases. It shows that it can occur under certain circumstances,” he said.

For example, investigations into leaks in Victoria have revealed that a returned traveller staying in the Park Royal Hotel likely got the virus when their door opened at the same time as the door of a large family staying opposite where five people were COVID-positive.

And in the Holiday Inn Melbourne Airport outbreak it is suspected a number of cases stemmed from the use of a nebuliser machine, which helps people breathe and creates mist which may have carried the disease.

Emeritus Professor Sim said while air filters were good interim measure to address ventilation problems, they were only useful in fairly small spaces and were not a substitute for a proper heating, ventilation, and air conditioning, with negative pressure (meaning the virus didn’t flow from rooms into corridors).

“I think they are more an interim measure rather than a permanent solution,” he said. “It’s much better to have a properly functioning air conditioning system that’s not noisy and people can’t drape things over them.”

Professor Monty has also argued that purpose-built facilities such as Howard Springs should be used instead of hotels for quarantine.

The agency that manages hotel quarantine in Victoria, COVID-19 Quarantine Victoria, confirmed that air purifiers had been introduced shortly after the resumption of international flights to Melbourne on April 8, after a review chaired by leading advisor Professor Allen Cheng called for consideration of a trial.

“Air purifiers are placed in rooms where there are three or more residents residing and where a resident uses Continuous Positive Airway Pressure (CPAP) or Bilevel Positive Airways Pressure (BiPAP) device,” a CQV spokeswoman said.

“The use of CPAP/BiPAP under strict conditions, has been approved by the Chief Health Officer, for use in hotel quarantine.”