DOMINIC SANDBROOK: This is not just a Corbyn problem… it sums up the repellent misogyny of the Hard Left

Three years ago, addressing his first Labour conference as leader, Jeremy Corbyn told his acolytes that his victory marked the beginning of a new style of politics.

‘I do not believe in personal abuse of any sort,’ he said earnestly. ‘There’s going to be no rudeness from me . . . So I say to all activists, cut out the personal attacks, and especially the misogynistic abuse.’

Fine words — if only he had heeded them. For we saw a very different Jeremy Corbyn yesterday.

Smarting after a beating at the hands of Theresa May in the Commons, and forgetting the camera was on him, the Labour leader muttered bitterly: ‘Stupid woman.’ 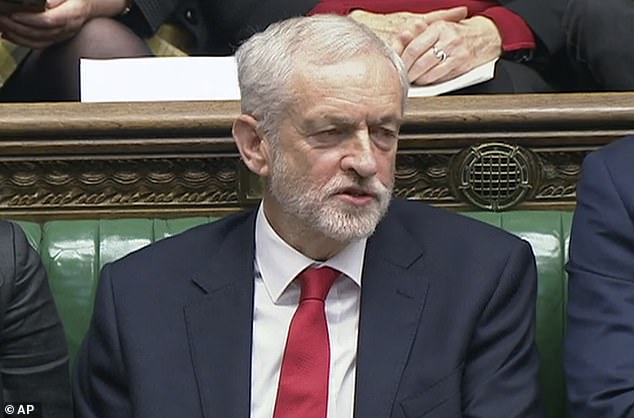 Labour leader Jeremy Corbyn says something under his breath after the British Prime Minister Theresa May likened Labour’s attempt to table a no confidence motion in her to a pantomime, reported to have been ‘stupid woman’

Once he realised he had been caught, almost any other Labour leader would have offered a swift apology, and the matter would probably have been forgotten. In the heat of the moment, everybody makes mistakes.

But apologies are not in Mr Corbyn’s nature. Instead, he had the gall to return to the Commons and claim he had actually said ‘Stupid people’ — even though professional lip-readers were convinced the second word was ‘woman’.

It might sound like a trivial slip. But trivial slips can be very revealing, and when you factor in Mr Corbyn’s dishonesty afterwards, I think it was a remarkable glimpse behind the Labour leader’s pious mask.

Mr Corbyn’s disciples love to depict him as a saintly, well-meaning man, a kind of secular Jesus. But as yesterday’s events showed, you do not have to scratch the surface too deeply to reveal the intolerant, hypocritical and fundamentally nasty reality.

Like so many on the high-minded Left, Mr Corbyn views himself as the embodiment of virtue. He is suffused with a sense of righteousness, smug in the knowledge that he is one of the enlightened few, surrounded by evil Tories and brainwashed masses.

Ever since he won the Labour leadership, he has struck me as a Dickensian figure, a monster of sanctimonious hypocrisy, at once complacent, conceited and utterly cynical.

What also strikes me, though, is that this is not just a Jeremy Corbyn problem. He is merely the embodiment of the rank hypocrisy and repellent misogyny of the Labour Left.

Mr Corbyn’s followers always talk a good game, of course. They boast about their love of equality and their enthusiasm for quotas. But their own actions tell a different story.

In 2016, for example, Mr Corbyn was happy to speak at an event organised by the far-Left Socialist Workers Party, despite the fact that this extremist sect had become embroiled in allegations it covered up rape and sexual harassment. More than a hundred of his own supporters begged him not to go — but he went anyway. 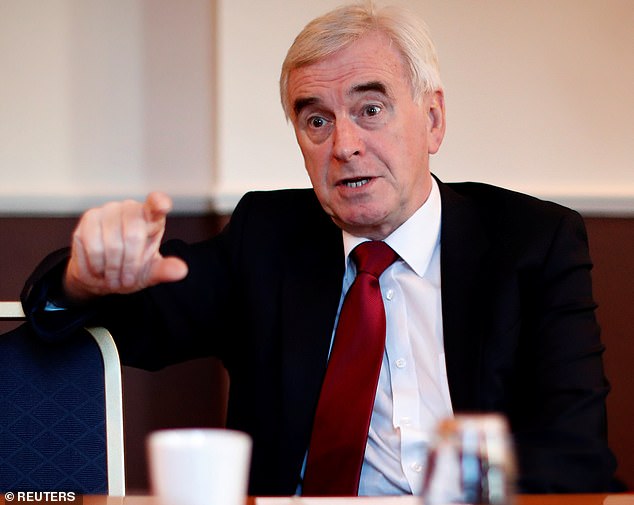 A year later, a Labour activist called Bex Bailey alleged she had been raped at a party event. So what did Mr Corbyn do? The answer, of course, is nothing. Indeed, only a few months ago, Ms Bailey accused the party of ‘dragging its feet’ over an independent report into its culture of sexual abuse.

The truth is that the Left care about women’s issues only when they fit into their wilder ideological schemes. If women get in the way, they are ignored. And if women challenge the entitled, privately educated men at the top of the self-styled ‘People’s Party’, they can expect a venomous reaction. I could fill every page of this newspaper with examples.

In 2014, for example, Mr Corbyn’s current Shadow Chancellor and Marxist puppet-master John McDonnell told an audience of hard-Left activists that not only should Tory minister Esther McVey be sacked, but echoed a call by one of her constituents that they should ‘lynch the b******’.

Would he have talked of lynching her if she had been a man? I doubt it, somehow.

Another leading Left-wing MP, Clive Lewis, once greeted an actor on stage at a Momentum event with the words: ‘Down on your knees, bitch.’ He later claimed it was a joke. But if a Tory MP had said it, can you imagine the reaction? 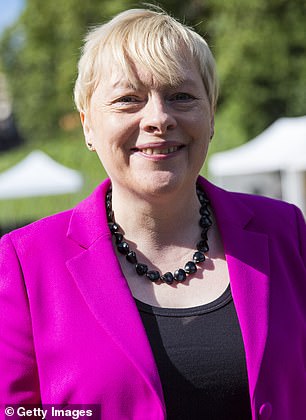 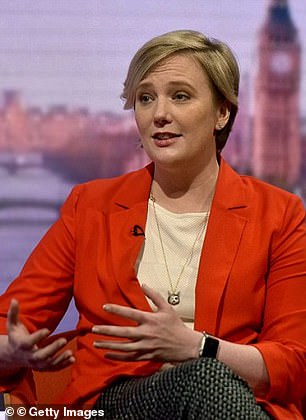 The Left’s most vicious treatment, however, is reserved for women within its own ranks who have the temerity to challenge their beloved leader.

The Labour MP Stella Creasy, for example, has been bombarded with rape threats and misogynistic abuse from hard-Left activists who want to drive her out of her Walthamstow constituency.

Another Corbyn critic, MP Angela Eagle, who is gay, received hundreds of ‘abusive, homophobic and frightening’ messages when she considered challenging him for the leadership, and had a brick thrown through the window of her constituency office in Wallasey.

The Stoke-on-Trent North MP Ruth Smeeth — who, for the Left, has three black marks against her, since she is Jewish, a woman and a critic of Mr Corbyn — received a staggering 25,000 abusive messages after she dared to speak out.

‘Hang yourself you vile treacherous Zionist Tory filth, you’re a cancer of humanity,’ read a typical example. So much for Mr Corbyn’s kinder, gentler politics. 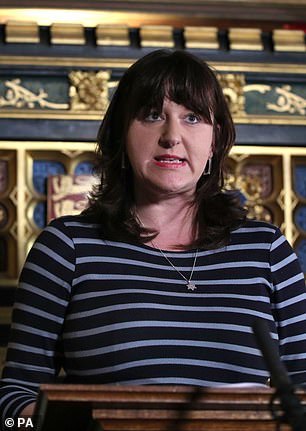 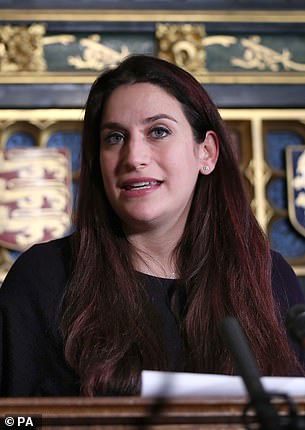 Labour MPs Ruth Smeeth and Luciana Berger speaking at an Association of Jewish Refugees event in the Houses of Parliament in Westminster, London, on the 80th anniversary of the Kindertransport scheme. They have both been the victims of anti-Semitic abuse

And almost incredibly, the Labour MP Luciana Berger needed police protection to attend her own party conference, because she had the courage to denounce the culture of virulent anti-Semitism that has seeped deep into the heart of Mr Corbyn’s Labour Party.

The remarkable thing about these examples is that no man has attracted anything like the same abuse. The only possible conclusion is that the Left have a problem with women.

In some ways, perhaps that is not surprising.

The party’s paymasters, the trade unions, were bastions of the crudest chauvinism until well into the Eighties. And it is surely no coincidence that while the Conservatives have produced two female Prime Ministers, Labour has yet to elect its first woman leader.

Indeed, the Left’s treatment of Britain’s two women Prime Ministers could hardly be more revealing. Rather than simply disagreeing with Mrs May, they sneer at her appearance and mock her as a ‘robot’. 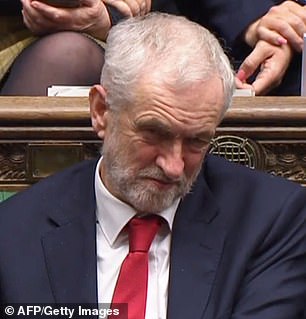 Mr Corbyn might be able to help being a nasty, dishonest, sexist hypocrite. But the poor fellow can’t help being stupid, says Dominic Sandbrook

Their treatment of Margaret Thatcher, meanwhile, took their misogyny to extraordinary heights. She was never simply wrong: she was ‘Attila the Hen’, the ‘Great She-Elephant’, the ‘Pasionara of Privilege’ or simply ‘That Woman’.

And when Lady Thatcher died, what was the song Left-wing activists tried to get to the top of the charts? It was, of course, Ding, Dong, The Witch Is Dead. How very progressive.

Why do the Left do this? Why do they harbour such hatred for women? Why do they talk of ‘witches’ and ‘bitches’, of ‘hating’ and ‘lynching’?

The answer, I think, is that they are so wrapped up in their own moral superiority that they treat opponents (‘Tory scum’) with strident intolerance.

And precisely because these shameless hypocrites are so convinced of their own virtue, they think they can do no wrong. They can hurl any abuse, tell any lie, in pursuit of their ideological ambitions, and they think history will vindicate them.

None of this is surprising. What is surprising is that Commons Speaker John Bercow let Mr Corbyn get away with it.

You don’t have to be a conspiracy theorist to wonder whether this was payback for Labour’s support after allegations that Mr Bercow bullied his staff — many of whom, of course, happen to be women.

And there is one last irony in all this. Theresa May is not perfect, but she is definitely not stupid. Having won a place at grammar school, she then went to Oxford, where she did a degree in geography.

By contrast, Jeremy Corbyn went to private school, gained just two Es at A-level and never managed to finish his degree in Trade Union Studies at the Polytechnic of North London.

Still, we shouldn’t be too harsh. Mr Corbyn might be able to help being a nasty, dishonest, sexist hypocrite. But the poor fellow can’t help being stupid.