Doctors are warning about the dangers  of a trend sweeping TikTok – where women remove their own contraceptive coils.

Coils – also known as copper coils or IUDs – are contraceptive devices that are up to 99 percent effective at preventing pregnancy when inserted properly.

They should be inserted and removed by a medical professional, but women from around the world who are struggling to book appointments with their doctor or gynaecologist are resorting to doing it themselves and posting ‘IUD removal’ videos online.

Others have reported being refused removal unless they agree to start on another form of contraception, and have therefore taken matters into their own hands.

But doctors warn that a DIY removal can result in pain, bleeding or further embedding, and even risks a prolapse of the uterus. 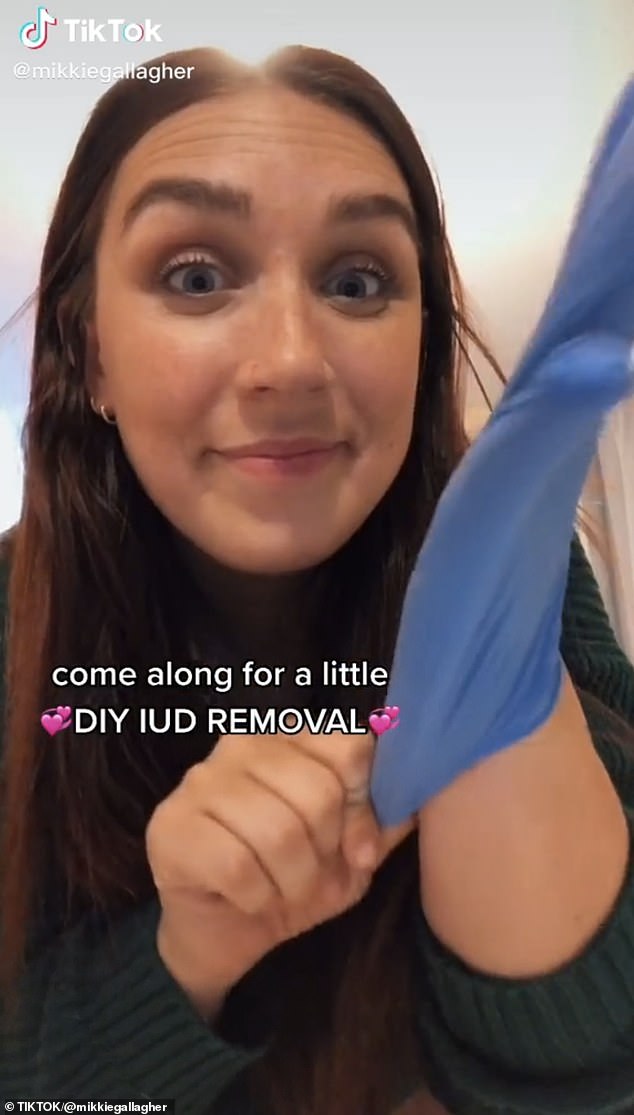 TikTokker @mikkiegallgher, who has almost 25,000 followers, advised viewers that her video was not to be taken as medical advice 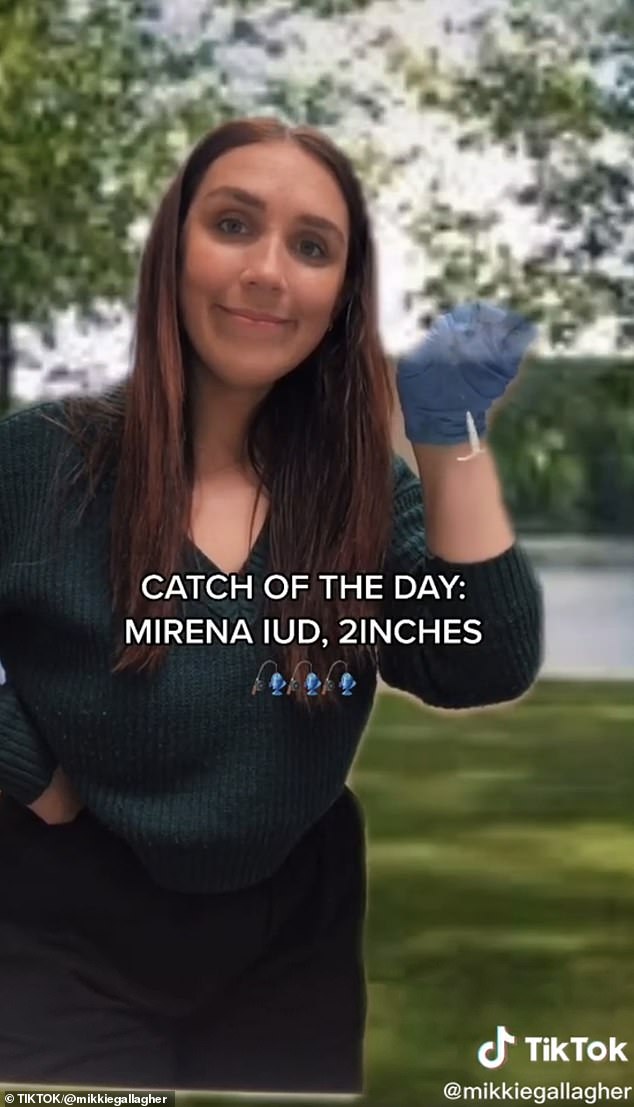 TIkTok creator, Mikkiegallagher, who is from the US but now lives in Ireland, who showed a close-up of her face while pulling the device out, warned her viewers that she wasn’t giving medical advice on her video.

But she did reveal that the IUD removal was ‘a lot easier’ than she thought it would be.

The TikTokker told her 25,000 followers the process only took two minutes.

But a number of doctors have criticized the trend.

What is a ‘coil’ and what does it do?

A coil or copper coil, is medically known as an IUD.

It is a small T-shaped plastic and copper device that’s put into your womb (uterus) by a doctor or nurse.

It releases copper to stop you getting pregnant, and protects against pregnancy for between 5 and 10 years.

An IUD works as soon as it’s put in and lasts for 5 to 10 years, depending on the type.

It can be put in at any time during your menstrual cycle, as long as you’re not pregnant.

It can be taken out at any time by a specially trained doctor or nurse. It’s then possible to get pregnant straight away.

Your periods can be heavier, longer or more painful in the first 3 to 6 months after an IUD is put in. You might get spotting or bleeding between periods.

There’s a small risk of getting an infection after it’s been fitted.

There’s a small risk that your body may push out the IUD or it may move. Your doctor or nurse will teach you how to check it’s in place.

It can be uncomfortable when the IUD is put in, but you can take painkillers after, if you need to.

It may not be suitable if you have had previous pelvic infections.

It does not protect against sexually transmitted infections (STIs), so you may need to use condoms as well.

New York-based OB-GYN Dr. Anar Yukhayev told NBC that it is better to get a medic to perform the procedure as they have the right tools.

He said that in some situations, they may even need to use some force.

He added: ‘The thing is, you have to know exactly how much force to use.

‘When you pull it, you can actually lodge it in a different part of the uterus and make the embedding of the IUD even worse.

‘That’s one of the issues I can think about why it’s not a good idea, or it’s risky, actually dangerous.’

OB-GYN Dr. Gloria Bachmann, director of the Women’s Health Institute at the Rutgers Robert Wood Johnson Medical School, told TODAY it’s better to remove coils in a ‘controlled environment’, as doctors are better equipped to deal with any issues that may arise.

She added: ‘When we take it out in the office, everything is visualized as you are doing it more or less blindly (at home).

‘If it’s embedded in the muscle layer of the uterus, which can happen, it can cause a lot more bleeding, a lot more pain and it can actually bring the uterus down with it, which is not something that one would want.’

When it comes to medics refusing to remove coils, Dr. Yukhayev said it’s important that a solution is found that works for the patient.

He added: ‘I see my job as a physician to tell the patient what I think is going on, what the risks and benefits are, what the options are and for us together to come to a decision that we’re both comfortable with.

‘Now, I can’t ever imagine myself being in a position where a patient really wants their IUD out and I tell them, “no”.

‘If you come across an OB-GYN who goes against what you want then it’s probably time to find yourself a different doctor.’

Not all medics agree. Dr. Jennifer Lincoln is a board-certified OB-GYN in Portland who has a TikTok account with 2.3 million followers.

She made a video about the topic saying: ‘Can you take out your own IUD?

‘Honestly, actually probably, you can. IUD removals are actually really straightforward and simple most of the time.

‘In fact, I’ve taken out two of my own IUDs at home because I didn’t feel like making an appointment.

‘If you’re able to easily grasp the string and with a gentle tug remove it, cool. But if you can’t get the string, or it hurts, or you pull on it and it doesn’t come out, you need to stop.

‘Some other OB-GYNs may disagree with me, and that’s ok, but going to the doctor to have an IUD removed can sometimes be a little difficult when it comes to childcare and cost.

‘But by the same token, if you want to come in and have us do it, we’re more than happy.’