It’s that time of year when everyone’s favorite holiday-hating recluse is leaving Mt. Crumpet for the season and making a pit-stop in Whoville. Or rather, Los Angeles and Orlando, Florida. With the newest remake of the Grinch currently out in theaters, Disney’s Whoville is open this holiday so you can meet the Grinch and his pup Max IRL and even snap a holiday photo with the Who crew while you’re at it. Get ready to partake in all the cranky fun and watch your heart grow three sizes, because it’s officially the best time of the year.

The countdown to Christmas and the end of 2018 is going by a little bit faster than I would like, but I’m all about prolonging the holiday fuzzies with a side of snark, courtesy of the newest installment of The Grinch. Not only has Party City debuted the sassiest Grinch onesies for your entire family and your four-legged friend, but Whoville gingerbread house kits, green pancakes, and even Grinch makeup kits all paying homage to the un-jolliest creature of them all have all made an appearance in the last month.

Let’s be real, everyone gets a case of the grumps even during the holiday season, but a visit to Whoville is pretty much 100 percent guaranteed to put a smile back on your face. Once again, Los Angeles’ Universal Studios Hollywood and the Universal Orlando’s Islands of Adventure are getting hit with the ‘Grinchmas’ treatment, which means you’re only a plane ride or drive away from some unforgettable holiday fun. 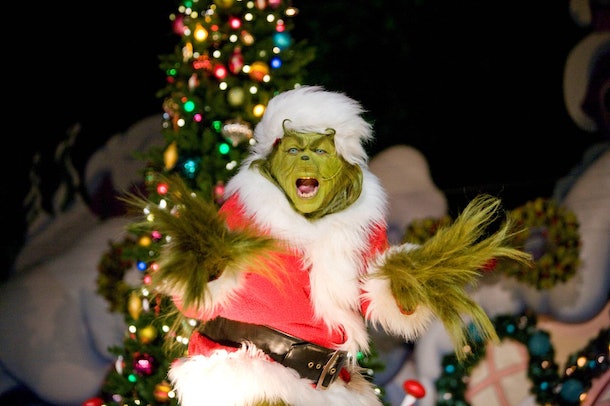 Per the Universal theme park websites, the Grinch-y offerings look pretty comparable on either coast. At the Orlando location, you’ll be getting seasonal cheer with a side of sarcasm when you head to the tinsel-decked Seuss Landing, which has been transformed into Whoville for the holidays until Jan. 6. Make sure you catch the re-telling of the famous How The Grinch Stole Christmas story with The Grinchmas Who-liday Spectacular, after which you can meet Mt. Crumpet’s most notorious resident along with Max the dog, Cindy Lou Who, and other beloved Whoville citizens. You can even grab a character breakfast with the group the next morning if you decide you need even more snark (and roast beast) in your life.

Meanwhile, at Universal Studios Hollywood, Martha May Who-Vier and her Who-Dolls will be putting on a holiday revue that’ll melt even the grumpiest of hearts. On select dates (Dec. 1, 2, 8, 9 and 14 – 30), Grinch fans can steal over to the revamped Whoville to get in on the fun, including photo-ops with the green hermit himself and a spectacular tree-lighting ceremony with a 65-foot Seussian tree. If the Grinch is not in, you can also send a postcard to him promising three good deeds, according to the Universal website.

The best part about all the Whoville magic is that there will be a good mix of elements from both Jim Carrey’s beloved 2000 film The Grinch Who Stole Christmas and the 2018 Grinch installment, meaning that you can enjoy all the new Grinch merchandise with a heartwarming dose of nostalgia that even the grumpiest holiday cynic couldn’t resist.

Again, Whoville is only open for a limited time this holiday season (especially the Hollywood location), so I’d make sure to double check the schedule before booking your sleigh ride over to hang out with the gang.