The first season of this true-crime anthology series was an engrossing affair with terrific performances from Connie Britton and Eric Bana. This new season, starring the underrated Amanda Peet and the rarely spotted Christian Slater, starts out looking like it's going to flip the script, as they say in Hollywood. It's the 1980s, and the first thing that leaps out about Peet is that she can really rock some big hair, some blue eyeshadow, and a mom jean. The second thing is that it's her character, California woman Betty Broderick, who looks like being the villain. Almost right away we see that Betty has become unhinged by the fact that her husband, lawyer Dan (Slater), has left her and taken the kids. She won't sign the divorce papers, even though her lawyer has flown down from LA to San Diego to drive her to Dan's lawyer's office to do so. Just minutes of TV time later, police are hauling Betty away in a straitjacket in front of her appalled children after she deliberately, if somewhat gingerly, crashed her car into Dan's new house. 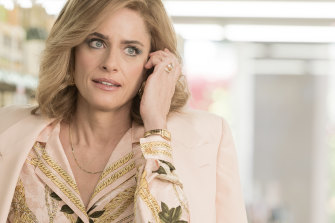 Did police really carry straitjackets around in the boots of their cars in the '80s? If so, that's an interesting piece of period detail. And period detail is something in which this season's production and wardrobe designers really excel. The clothes, hair, make-up and furniture are exquisitely '80s, but in an unobtrusive way that doesn't cram Walkmans and leg warmers and MTV into every scene. The series also excels when it comes to filling in the sad back story that brought Betty to her breaking point. And for that, it could hardly have found a better fit than Peet, who never seems to land the roles that would make her a bigger name, but whose performance here is versatile, captivating and achingly vulnerable. Some of the back story, though, plays out in earlier decades, where Betty is played by Riverdale's Tiera Skovbye and the eminently detestable Dan by Chris Mason, decked out in the hair and glasses of a young Stephen King. The drama around the shocking crime at the centre of it all might have been enough to carry things on its own, but the series also gives viewers a lot more to chew over – not least the kinds of psychological abuse that never end up in a courtroom.

It's fashionable to say that your favourite bread is some special artisanal harvest-grain loaf, but down at the supermarket half the shelves are filled with the whitest of white bread. That's the lucrative economic space in which New York comedian Jim Gaffigan operates. These twin stand-up specials, in which Gaffigan does a routine about Canada in Canada and another about Spain in Spain have some weak areas in the toilet and trouser region but are mostly very precisely observed, constructed, timed and tagged.

Poor little pangolins. Long before they were being blamed for the Coronavirus epidemic, they were being trapped, killed and trafficked in their hundreds of thousands to satisfy Asian demand for their meat, which can sell for up to $700 a kilo, and for their scales, which are used in folk remedies. This gorgeous but alarming BBC documentary introduces us to the adorable critters, which totter about on two legs looking like little armoured T. rexes, and to some of the humans working to save them across Asia and Africa.

Viewers who took a liking to Daniel Mays in the Netflix's Balearic surprise hit White Lines will also want to check him out in the third season of this tense British police drama. As armed coppers scramble to intercept a gangster believed to be on his way to murder someone, it's clear that the squad leader (Daniel Mays) has some sort of history with the target. When the interception ends in disaster, our old pals from internal investigations are on the case. Expect sharp turns on a white-knuckle ride. 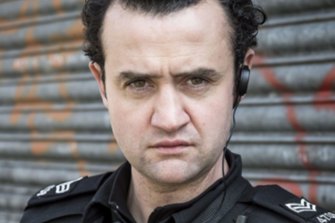 Daniel Mays in season three of Line of Duty.

Visible: Out on Television
Apple TV+

This terrific series gets off to a slightly inauspicious start with an exhausting cascade of soundbite after soundbite after soundbite that seems designed mainly to show off just how many wonderful people were interviewed for the project. After that, though, it gets seriously fascinating. And the importance of representation on screen is immediately clear. To borrow a soundbite from news program host Rachel Maddow in that initial deluge: "Being on television makes people see you as part of the country, part of the culture, part of who we are as a nation." Inevitably, perhaps, the first mention of homosexuality on American television was in the context of Senator Joe McCarthy's anti-gay witch hunt, but over time more and more progressive depictions of gay and trans people were making it in to such programs as Normal Lear's All in the Family. Emmy-nominated documentarian Ryan White (The Keepers), finds all the right people to explain what was going to air when, and the effect that it had on LGBT viewers who had never seen people like themselves on screen before.

In 2010 American women Colleen LaRose and Jamie Paulin Ramirez were arrested in Ireland as part of an Islamic terrorist conspiracy to murder a Swedish artist. They seemed most unlikely terrorists at the time, and their own frank and fascinating first-person accounts in this documentary provide no simple answers about their online self-radicalisation. There are insights to be gleaned, though, in their traumatic histories, and how they still derive self worth from their identity as jihadis. 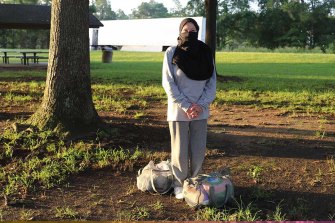 A scene from Jihad Jane.