‘It captures the absurdity of Diana’s hell’: Critics brand Spencer an ‘overwrought fantasy’ and ‘horror movie’ about ‘fragile woman held captive in a spooky mansion’ that paints royal family as ‘sadistic monsters’

Critics have described Princess Diana film Spencer as a ‘horror movie’ that paints the royal family as ‘sadistic monsters’.

The film, which was released this weekend, is set over three-days at Sandringham in Christmas of 1991, shows the late royal’s relationship with her beloved sons, the way she navigated the press and a constant battle with her in-laws.

Lead Kristen Stewart has been tipped for Oscar nomination for her portrayal of Diana, but some critics have slammed the film for painting Diana’s stay at Sandringham as ‘a right royal Christmas from hell’. 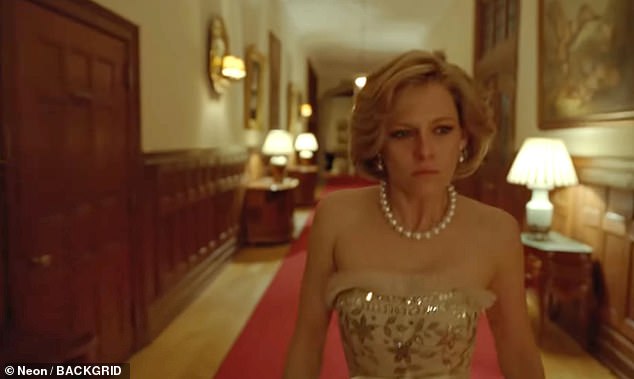 Lead Kristen Stewart has been tipped for Oscar nomination for her portrayal of Diana, but some critics have slammed the film for painting Diana’s stay at Sandringham as ‘a right royal Christmas from hell’.

Critics have described Princess Diana film Spencer as a ‘horror movie’ that paints the royal family as ‘sadistic monsters’. Pictured are reviews from The Times, Guardian, New York Times, and the Telegraph

Prefaced as ‘a fable from a true tragedy’, the story directed by Pablo Larraín, has also been compared to Jackie – another notable work of his about three days in the life of Jackie Kennedy following the death of JFK.

Metacritic, gave it a score of 78 per cent, noting mostly positive reviews, with critics agreeing the film is closer to a horror movie or psychodrama than a biopic.

The Observer’s film critic Mark Kermode praised the film for ‘remarkably truthful dances between ethereal ghost story, arch social satire and no-holds-barred psychodrama’ in a four-star review, while the New York Times went a step further to describe it as ‘is a horror movie about a fragile woman held captive in a spooky mansion, tormented by sadistic monsters and their treacherous minions’.

Film critic AO Scott went on to say it was a ‘a psychological thriller about a powerful, unaccountable authoritarian cabal conspiring to crush the spirit of an independent-minded rebel’ as well as a ‘love story, a melodrama of maternal devotion, an early-’90s fashion parade and a very British baking show’.

‘The in-laws from hell’: What critics are saying about Kristen Stewart in Spencer

‘A bold and somewhat mysterious portrait of a woman searching for her own identity, conjuring ‘a fable from a true tragedy’ that, for all its dramatic invention, feels remarkably truthful.

‘Playing out over three excruciating days at Sandringham – from Christmas Eve to Boxing Day – and carried shoulder high by a note-perfect Kristen Stewart, Spencer (the very title of which seems to present a challenge to the House of Windsor) dances between ethereal ghost story, arch social satire and no-holds-barred psychodrama, while remaining at heart a paean to motherhood.’

TELEGRAPH: ‘Meghan Markle might be first in the box-office queue’

‘Extraordinary performance [from Stewart]. She captures to perfection the kind of surface details most biopics would pride themselves on as ends in themselves, from Diana’s halting speech to her coquettish downward glances and head tilts.

‘The Royals, insular, moth-grey and hidebound, are cast in a grimly unflattering light: on Spencer’s opening day, you sense Meghan Markle might be first in the box-office queue. But this is an apocryphal, one-woman psychodrama, and the Royals themselves, up to and including Stella Gonet’s Queen Elizabeth II, are largely reduced to background artists

‘Unlike The Crown, it seems there is little risk of viewers confusing all of the above with stringent documentary realism. But every moment in Spencer rings psychologically and folklorically true

‘This film conspicuously exaggerates Diana’s first-world problems with black-comic stylings, fictional flourishes and some beautiful images. The nightmarish absurdity of what Diana had to endure and her consequent unhappiness create something that looks as if it has been co-directed by former Sun editor Kelvin MacKenzie and Dario Argento.

‘The film ultimately implies that her problems are down to the ghastly Windsors: away from them, driving around in her car with the boys, listening to Mike and the Mechanics on the tape-deck and having an unpretentious KFC, she could relax and be herself, a Spencer….

‘Another type of film, without all the Halloween gothic naivety, might have challenged this view’.

THE TIMES: ‘The clunkiest lines of dialogue that the screenwriter Steven Knight has yet concocted’

‘It doesn’t help that Stewart’s Diana, whether perpetually late for supper or flouncing around Sandringham in a neurasthenic stupor, is lumbered with some of the clunkiest lines of dialogue that the screenwriter Steven Knight has yet concocted

‘The film consistently embraces the idea that this clash between Diana and the royals eventually found fullest and most final expression in her violent death, six years later.

‘All credit to LA-born Stewart, whose subtle and uncannily precise take on the English icon is guaranteed to earn her an Oscar nomination. Her accent doesn’t wobble, nor do millennial mannerisms creep into the mix. Above all, the 31-year-old actress is funny, delivering earthy gags, or sometimes just widening her eyes, in a way that makes you see the absurdity of Diana’s hellish situation.

‘The gun-toting Queen (Stella Gonet), who, aptly, resembles the terrifying matriarch played by Catherine Keener in horror classic Get Out, has a brutally honest kind of charm, while Charles (Jack Farthing) often appears reasonable.

‘The film acknowledges that Diana can be a flaky and coy diva. Such ‘warts’ are what make this portrait valuable. It doesn’t whitewash anyone

NEW YORK TIMES: A horror movie about a fragile woman held captive in a spooky mansion

Spencer’ is a Christmas movie, in which a big, dysfunctional family gathers at the holiday to feast, exchange gifts and engage in peculiar traditions meant to provide ‘a bit of fun.’

‘Spencer’ is a horror movie about a fragile woman held captive in a spooky mansion, tormented by sadistic monsters and their treacherous minions.

‘Spencer’ is a psychological thriller about a powerful, unaccountable authoritarian cabal conspiring to crush the spirit of an independent-minded rebel.

‘Spencer’ is a love story, a melodrama of maternal devotion, an early-’90s fashion parade and a very British baking show. (The scones and pastries are organic.)

EVENT MAGAZINE: Spencer is not perfect

‘Despite the Princess’s beautifully recreated and iconic wardrobe, Spencer is still not perfect. It eventually becomes repetitive in structure, with the Princess having at least one too many heart-to-hearts with sympathetic Palace servants.

‘But do look out for some touching scenes with her beloved boys, an unexpected declaration of love and a terrific supporting turn from Sean Harris as the Royal head chef.

RADIO TIMES: Stewart’s take on the Princess of Wales is akin to that of a feral cat

‘Stewart’s take on the Princess of Wales is akin to that of a feral cat, lashing out when pushed into a corner. The tension palpable between herself and the rest of the family, Diana finds herself growingly desperate to escape the stifling environment.

‘Comparing her situation to that of Anne Boleyn’s, she begins to imagine herself as the Tudor queen, and tries to escape to the grounds to her old, childhood home. While the audience watches Diana’s more erratic behaviour with concern, her behaviour is dismissed by those close to the royals as her ‘cracking up’

‘Spencer is like nothing you’ve seen before… Spencer is an unusual, even eerie, look at a free spirit who feels trapped in a world of rules

‘Yes she has Diana’s mannerisms spot-on – the wide eyes, the tilted head – but there’s more too. Here is a thirty-year-old princess so full of both youthful spirit and unparalleled responsibilities that she doesn’t know which way to turn. ‘

EMPIRE: Stewart takes an icon and makes her human

‘In her best performance since Personal Shopper, she takes an icon and deftly makes her human.

‘Kristen Stewart gives the performance of her life as Diana Spencer, Princess of Wales. Oscar should smile on Stewart, who makes ‘Spencer’ a spellbinder from first scene to last.

‘Living in the Windsor pumpkin shell has driven Diana to mental collapse, worsened by her self abuse through cutting and bulimia. Diana would willingly disappear were it not for her young and adoring sons, William (Jack Nielen) and Harry (Freddie Spry).

JEZEBEL: Think your in-laws are bad? Imagine being Diana

‘With this background in mind, it’s little wonder that Spencer is among the coldest Christmas movies of all time (at least since Eyes Wide Shut). A yule log would freeze over in this company.

‘If you thought spending time with your in-laws sucked, just think about what it would be like with the added burden of royal formality

SALON: A  gorgeous yet superficial biopic of Princess Di

Diana is repeatedly told to ‘be beautiful.’ ‘Spencer’ is certainly beautiful to look at, but it also feels skin-deep.

FAR OUT: A royal fable that defies expectations

‘Kristen Stewart, after a shaky start, does a fantastic job. She expertly embodies Lady Diana as she tries her best to adjust to the realisation that she is little more than ‘currency’ in the eyes of the people, and that her role from now on is to smile, wear elegant dresses, and pretend that she feels nothing at all….

‘Unfortunately, Spencer suffers from a serious case of bathos. While Stewart’s performance is on the whole fairly subtle, she has a habit of fluctuating between subtle embodiment and outright parody with little warning.

‘Subsequently, what was intended to be poignant ends up being just a little toe-curling. Time and time again Spencer builds itself up only to hit another miniaturised anti-climax.’

LOS ANGLES TIMES: A portrait of a woman under siege

‘Don’t call ‘Spencer’ a biopic; in these moments, it’s closer to a war movie… It’s a portrait of a woman under siege. Increasingly depressed and isolated’

Guardian’s Peter Bradshaw added the film was an ‘overwrought fantasy’ that could have been directed by a tabloid editor and ‘conspicuously exaggerates Diana’s first-world problems with black-comic stylings, fictional flourishes and some beautiful images’.

Many also praised the casting of Stewart, who like Diana had a fractious relationship with the press from a young age after being shot to global super stardom when she starred in the Twilight franchise aged 18. 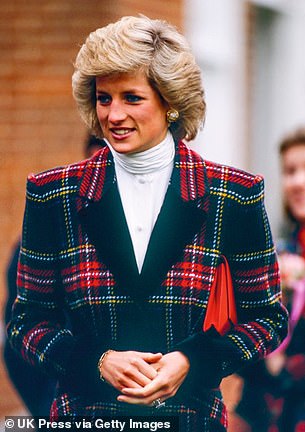 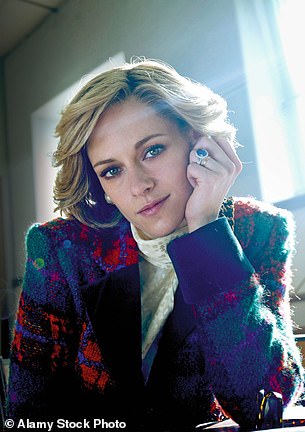 Kristen Stewart (pictured playing Diana, right) has said the extreme level of fame she has experienced help her have some personal understanding of the pressure Princess Diana (pictured left in 1989) most likely felt as she prepared for her role as the royal in Spencer

The 31-year-old actress recently The Sunday Times: ‘It’s feeling constantly watched, no matter what you do. If you’re in public, someone in the room is looking at you at all times.

‘Even if they’re not, it’s at the back of your mind. That is a feeling you only have if you’re extremely famous. It’s a completely different approach to being a human,’ she admitted.

American online magazine Salon called the piece a ‘gorgeous yet superficial biopic of Princess Di’ describing Stewart’s portrayal as ‘a lost and scared young woman who feels constantly under the microscope’. 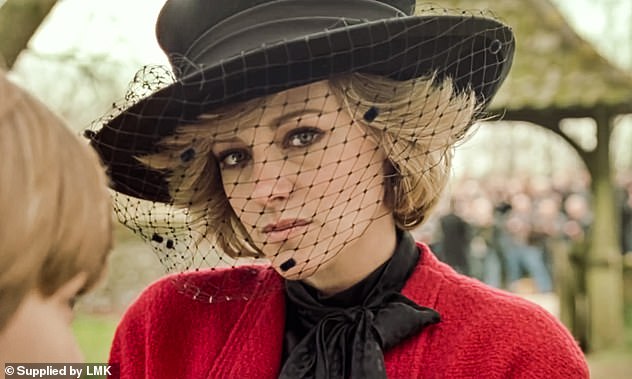 By aiming for a heightened reality, Pablo Larrain gives us the most powerful depiction of the wretched misery of Diana, played by Kristen Stewart (above) 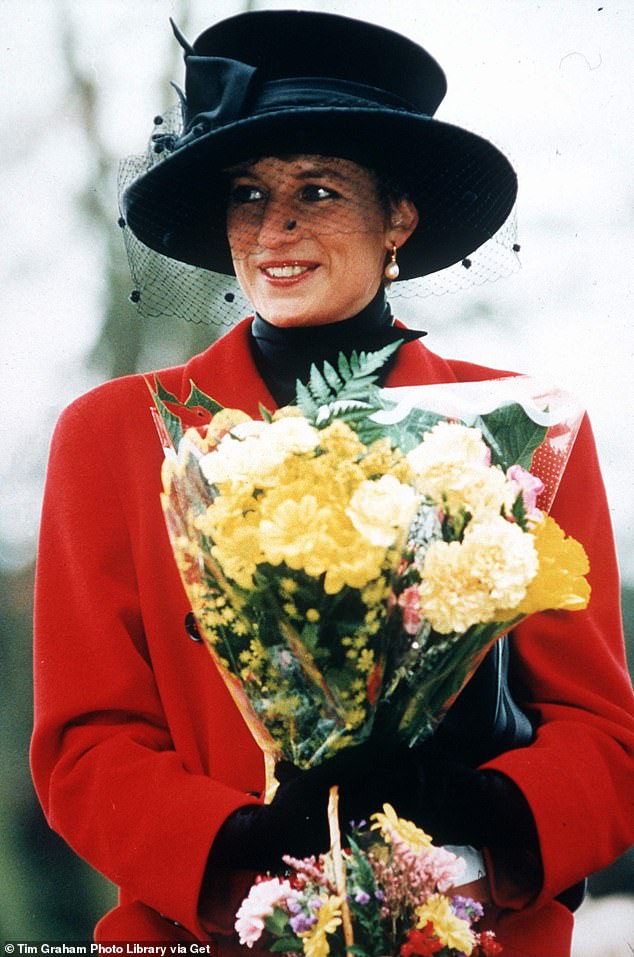 Princess Diana At Sandringham On Christmas Day in 1991

The film shows Diana as a royal rebel, turning up to the Christmas celebrations late, while also arriving at dinner and the royal photo late.

She’s also slammed for wearing the wrong dress, wondering the castle at night and waiting until Christmas day to give young William and Harry gifts, breaking the royal custom of exchanging gifts on Christmas Eve.

Family dynamics is at the heart of the film, with Jezebel calling saying the film is ‘among the coldest Christmas movies of all time’ adding ‘a yule log would freeze over in this company’.