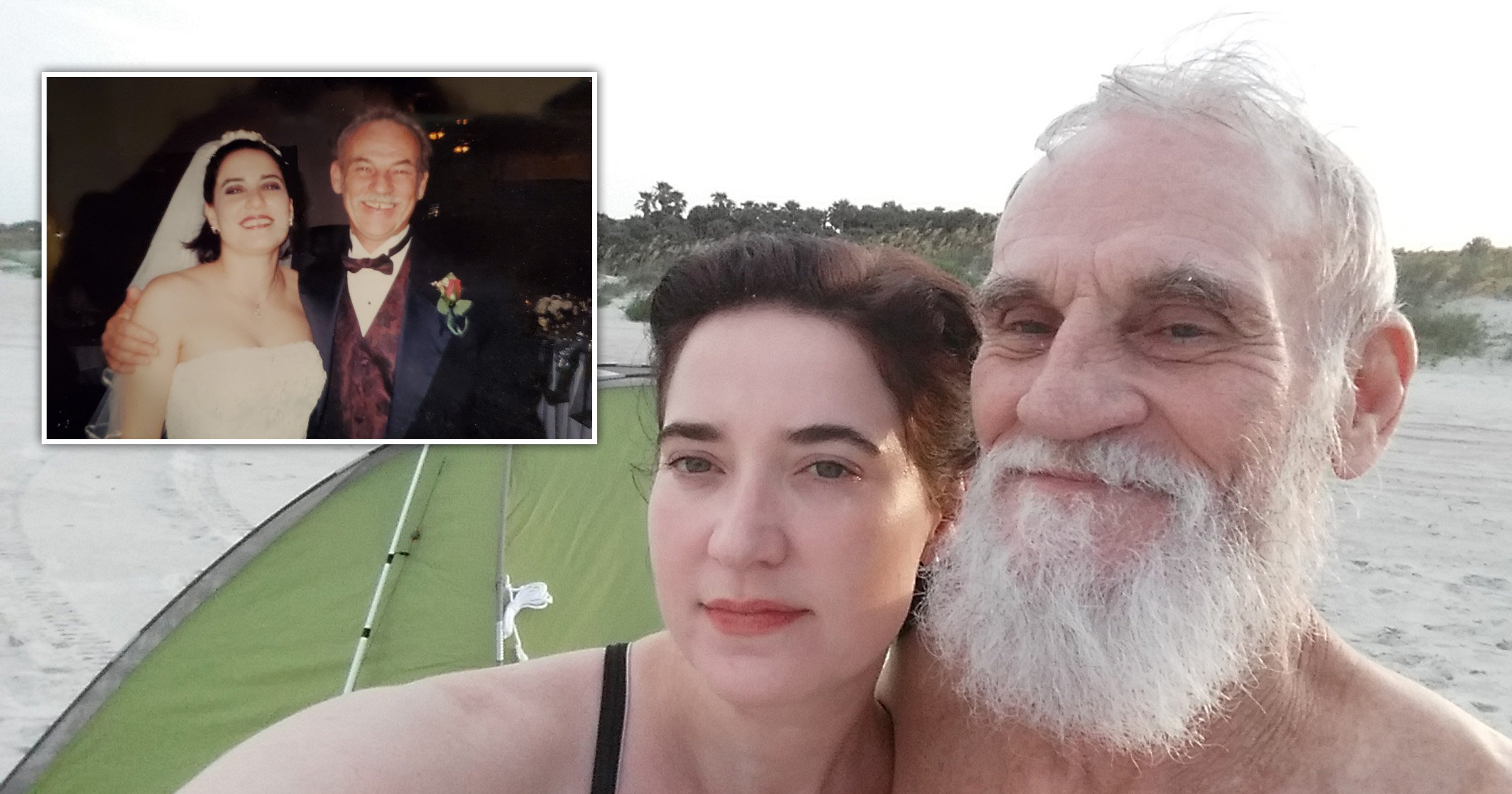 A 45-year-old woman married to a 71-year-old has shared how happy their marriage is, saying she’d recommend having a retired co-parent since they’ve got more time for the kids.

Ben and Allison Hornsby first met in 1998 – just a few years after Allison finished high school – while Ben was a USPS postman delivering the mail to the pawn shop she worked at.

They’ve been together 24 years now, and married for 20 of those, with Allison saying their marriage is strong and that Ben ‘treats her like a queen’.

‘We met 24 years ago when I was working at a pawnshop and Ben was the mailman,’ said Allison.

‘We got married in January 2002 and have been going strong for 20 years.

‘We are the parents of triplets (boys) and twins (a girl and a boy). The triplets are 19 and the twins are 15.

‘Raising five children, especially the same ages, has been challenging but also rewarding. When they were babies we lived on Ben’s mail route. He would come home for lunch and change diapers.

‘He retired when the triplets were seven and the twins were four, which has allowed him to be there as a father.

‘I think having Ben home and retired has many advantages. He has been hands-on and physically present as much as I am when it comes to raising our children.

‘This has helped me not feel overwhelmed when taking care of triplets and twins.

‘I think it’s been emotionally healthy for our children to get to spend quality time with their father. I would recommend this to others if it’s possible.

‘Ben has enjoyed being present and involved in raising them. Teaching them how to play chess, various card games and board games.

‘Also having the ability to meet with teachers, attend doctor’s appointments, and coach baseball.

‘We both feel our children have grown up with a unique influence of two different generations.

‘The age difference is very natural to our children. We have raised them to be open-minded and inclusive.’

Even though Ben and Allison’s upbringings were very different, they adore each other.

‘I was born in Virginia, my father was in the Navy so I travelled a lot growing up,’ said Ben. ‘I was in the US Army for four years.

‘I had a successful career as a letter carrier with the Post Office and transferred back to Jacksonville, Florida during the 1980s when my mother was sick.’

Meanwhile, Allison’s upbringing and tastes veered more towards the creative side of things.

‘I grew up in Jacksonville, Florida and have one younger sister. I attended Douglas Anderson School of the Arts where I graduated from high school in 1995,’ said Allison

‘I love drawing, painting and creating art as well as street art stickers and culture.’

Despite their difference in age and the occasional rude comment from strangers, Allison and Ben’s families and friends have been supportive of their relationship.

‘My sister accepts and loves Ben. My friends have always been supportive fans of our love. Ben’s family has always been very loving and accepting of me and our relationship,’ said Allison.

‘I notice on occasion women are judgemental or sometimes rude towards me. We have received rude, abusive messages a few times from men on Instagram and also one rude comment on one of our reels on Instagram.

‘This has been the only rude comment on a video of us kissing saying “that’s just nasty”.

‘We just ignored it. We have blocked a few men who sent us private messages asking about our sex life.

‘I have felt judged by women older than me. In contrast, we have been told by friends and people that just met us that we are a power couple.

‘We have received very positive compliments on our marriage from friends and people who spend time with us.

‘Our children’s teachers have told us we are good parents. We also get positive feedback on Instagram.’

Indeed, the couple isn’t remotely afraid to share their love with the world on social media, with Allison saying: ‘We love the way we feel when we’re together. Ben is truly the man of my dreams. I love the way he treats me like a Queen.

‘He is loyal and supportive, he makes me feel safe, loved and brings out the best version of me.

‘Ben loves the level of trust we share. My loyalty to him is unlike any relationship he has experienced.

‘He knows my love for him is pure, his happiness, health and well-being are my priority.’

Despite their unconventional love story, Allison said it’s ‘the best relationship either of us have ever had.’

She continued: ‘We fell in love very quickly. I knew right away Ben was the man I wanted to spend my life with, and he felt the same about me. Our attraction to each other is magnetic.

‘No matter where we are when we are together it feels like home. We never had any doubts about how we feel about each other.

‘We get along great even when we spend almost 100% of our time together.

‘We wanted to share our love on social media because we know what we share is beautiful and unique.

‘We want to be an example of a strong marriage for others.’

Speaking of setting an example, Allison has some advice for anyone whose love falls a little outside what is considered ‘normal’.

‘Follow your own judgment, don’t allow the opinions of others to influence your relationship,’ she said.

‘If you are in a mutually respectful and healthy relationship, don’t be confined by the judgment of others.