Rams is about two farming brothers who love their sheep, but not each other. It’s worth the price of admission just to see Sam Neill, as Colin Grimurson, standing in a paddock at dawn, talking to his "girls": "You are beautiful, you are beautiful…" He turns to his ram: ".. but you are the best".

We might be forgiven for thinking the film is an elaborate New Zealand joke. Indeed, the settings in Mount Barker in WA are lush enough to pass for that greener land, but the joke was originally Icelandic. 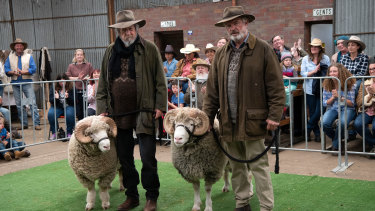 Michael Caton and Sam Neill play brothers who haven’t spoken to each other in decades.Credit:Roadshow

Hrutar (Rams) came out in 2015, directed by Grimur Hakonarson. It was wonderfully Icelandic. The brothers, who had not spoken in 40 years, had to work together when faced with a threat to their beloved flocks. The bloodlines had come down through 1000 years of farming (both the sheep and the brothers). Their tensions played out each year in a prestigious contest for best ram. The film was full of weather (and wethers), as befits a great Icelandic saga. Mount Barker works well as a substitute, with its rough coastline, lush valleys and that implacable range dominating every shot. Instead of snow, we get fire – which is appropriate.

In every sense, you need large testicles to remake the original. It came without a hint of overstatement, balanced between drama and comedy, a story ripped from dark and frozen northern soil. Inevitably, the remake does not quite measure up, although it’s successful on its own terms. It’s become a delicate Australian comedy, with its own deep relationship to the soil, and both are rare enough to cherish. Jeremy Sims has assembled a fine cast of sheep – the best since Babe. The human cast isn’t bad either: Michael Caton and Sam Neill square up to their roles like the grizzled veterans they are – throats parched, eyes squinting, flies buzzing. Most of Neill’s dialogue consists of him saying "Righto".

Older brother Les (Caton) is an alcoholic ball of rage, since their father willed the farm to his sibling. Les lives in the rundown original farmhouse, made of stone. Colin lives 100 metres away in a weather-board structure, probably built in the 1950s. The only thing they share is a communal border collie. Les calls her Flossie, Colin calls her Kip – but the dog loves them both. Wayne Blair is the deadpan neighbour Lionel, Colin’s only friend. Miranda Richardson plays "the pommy vet" – a love interest who sticks out in this cast like the prize-winning parts of Les’s champion ram. Richardson never looks at ease in this role – but I imagine someone thought they needed her to sell the film in Britain. Given the film is funny and exotic and has Sam Neill, they didn’t need this half-hearted romance grafted on.

The other glaring difference, which will be noticed by any Australian farmer, is the size of the flocks – and it presents a problem for the script adaptation, by Jules Duncan. Icelandic farmers might well have only 30 sheep in their care, and a personal relationship with each of them. No-one but a hobby farmer in Australia has that. It’s hard to get to know your "girls" when there are 40,000 of them spread over a run the size of Dorset. Duncan gets around the problem by inventing a very rare breed, the "Kalgan Horn", imported a century earlier from England. The cockies in this valley look down on merinos as an inferior beast – which becomes funny in itself.

Jeremy Sims showed his skills on Last Cab to Darwin (2015), which gave Michael Caton a memorable outing. WA-born Sims has a light touch with comedy and a heavier one with emotion. This material can handle that, because this story has a powerful dramatic spine, but it’s one of the ways the remake falls short of the original. In the Icelandic version, someone froze to death on a snowy mountainside. Sims gives us a realistic finale with a bushfire, but he was never going to end the film in tragedy, no matter how much it fitted the original. That would scare off the punters. It might also have made the drama so much more daring. If the remake has smaller testicles and a happy ending, who can begrudge that in these times?