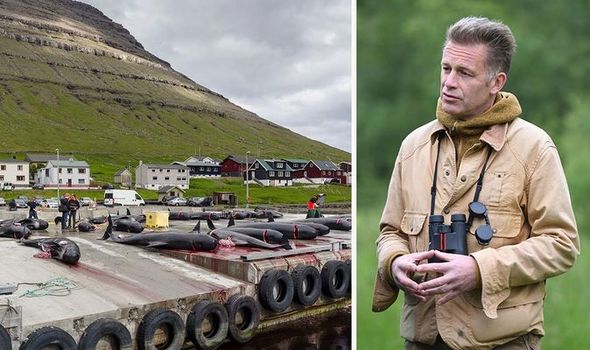 Whaling in the Faroe Islands ‑ referred to as Grindadráp ‑ is a type of dolphin drive hunting that involves beaching and slaughtering long-finned pilot whales for their meat. The BBC Springwatch presenter and Ecotricity founder joined dozens of others backing a campaign called Stop the Grind.

The coalition, which includes several marine conservation charities, sent the letter one month after the record killing of 1,428 white-sided dolphins.

In the letter sent to Prime Minister Bárður á Steig Nielsen on Monday, October 11, the group said: “It is our view that the Grindadráp not only flies in the face of the modern spirit of environmental preservation and marine species conservation but is also widely recognized by your own scientific and medical advisors as being a significant danger to the health of the Faroese people themselves.”

It continues: “The fact that businesses and individuals are willing to sever their ties with the Faroe Islands over the Grindadráp gives a clear indication of the strength of feeling and international unity on this issue.”

The group said “some traditions should be consigned to the pages of history books” as it offered ways to move forward.

The letter added: “Dolphins and pilot whales are key marine species which should be preserved and protected for the health and benefit of all people and the planet.

“It has been proven time and time again that nations and societies which have beneficially turned their traditions of hunting and exploitation of nature to new practices of conservation and restoration, and in doing so have generated significant boosts to their economies from doing so.”

Stop The Grind’s petition to end the hunt has amassed more than 278,000 signatures since launching two weeks ago.

While the UK parliamentary petition has received over 40,000 signatures.