With so many entertainment options, it's easy to miss brilliant streaming shows, movies and documentaries. Here are the ones to hit play on, or skip.

It's hard to imagine this incarnation of Get Shorty without the contrasting and complementary energies of Chris O'Dowd and Ray Romano.

The resounding booms of crime-caper successes like Pulp Fiction and Breaking Bad always lead to scrambles for similar material, and the best available is usually the taut, perceptive and frequently hilarious writing of the late, great Elmore Leonard – whose novels and short stories have brought us everything from Glenn Ford in the original 3:10 to Yuma in 1957 to Charles Bronson in Mr. Majestyk in 1974, John Travolta in the film version of Get Shorty in 1995 and to Quentin Tarantino's Jackie Brown in 1997. Justified (Stan*, Amazon Prime Video) was only partly based on Leonard's work, but it absolutely nailed his balance of humour, menace and emotional investment in quirky characters. 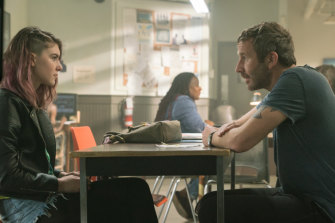 Get Shorty starring Chris O’Dowd (right) is in its third season.

In this Get Shorty it sometimes feels like Leonard's sense of humour has been replaced by a kind of shrug that says: "Well, a great big severed penis in a pickle jar is just funny in itself, isn't it?" It doesn't feel like there's any concerted attempt to play said penis for laughs. Perhaps it's only intended to instil horror, or as an example of the brutalisation of those who exist in the world of violent crime. Perhaps it's just there to get social-media mentions. Whatever the case, few penises in history have so lacked a clear raison d'etre.

And it's in this slightly off kind of world that O'Dowd is assiduously expanding his Irish teddy-bear persona (as previously seen in such marvellous things as Moone Boy) into a kind of Irish teddy-bear/grizzly-bear hybrid that is unfailingly sweet to old ladies and small children but has zero compunction about having a man's head smashed in with a wrench. It's a fairly tall order, but O'Dowd fills it while retaining a good deal of his charm.

Last week his character, gangster-turned-film producer Miles Daly, got out of prison and set about getting back into the movie business while initiating slow-burn vengeance against the Hollywood sleazebag who owes him. Romano, meanwhile, has been bringing his familiar blend of middle-aged aggravation and resignation as his character, movie producer-turned-paroled felon Rick Moreweather, has been busy recalling his between-seasons retirement in the Guatemalan jungle with his drug-queenpin fiancée, Amara (Lidia Porto).

Series creator Davey Holmes (Damages, In Treatment) continues to show us what a crummy place Hollywood is without actually transcending it.

This bloody Euro-creeper gets right all the things that so many other continental horror series do – and which so many anglophone ones don't. First and foremost is having characters that, for the most part, talk and behave like real people rather than cookie-cutter chess pieces. They have a real earthiness to go with their idiosyncrasies and shameful secrets. 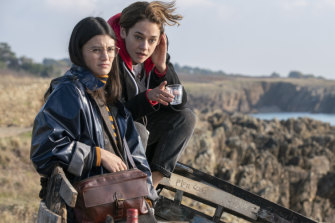 Angry, young horror writer Emma Larsimon (Victoire Du Bois) is on the publicity tour in Paris for her final spooky book – she wants to move on to more serious things. But when an old friend's appearance at a book signing ends in a ghastly tragedy Emma is forced to return to the little seaside town where she grew up. There her old friends are happy to see her, but her parents most definitely aren't. It seems that the spirit of an evil witch has taken up residence in the town and is blackmailing Emma into writing more horror – under threat of the witch visiting similar horrors on Emma's nearest and ostensibly dearest. The series eschews a lot of genre tropes and tricksiness, making it all the more involving.

Hello Privilege, It's Me, Chelsea
Netflix

Chelsea Handler has made a career out of flippant, crassly insensitive comedy. She does regard herself as a sensitive soul, but her previous Netflix forays into serious issues (Chelsea, Chelsea Does) have also come off as flippant, half-interested and self-indulgent. She does much better in this investigation of her own white privilege – partly, perhaps, because so many of the black people she meets make plain that it's not their job to make her feel better about it. Worthwhile viewing – especially if you don't believe in white privilege. 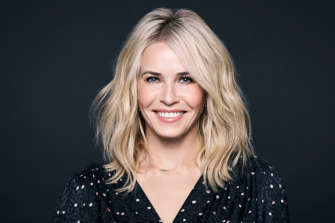 It's snack-sized fun as Jazz Twemlow (The Roast, Tonightly) and Nick Boshier (Bondi Hipsters, Beached Az) continue rolling out their 16-part online sketch series. Have you ever wanted to see Oscar-winning director Ron Howard deliver an earnest masterclass in escalating online arguments? Now you can. Ditto the villain from Saw having a bad day, and the staff of a celebrity clickbait website sinking into their own fractal existential hell. The likes of Nazeem Hussain and Greta Lee Jackson keep the chuckles coming.

This documentary is a stunning visual achievement, with director Douglas Tirola using perhaps thousands of images to give us a real sense of the seminal, savage American satirical magazine National Lampoon through its evolution across the 1970s, '80s and '90s. 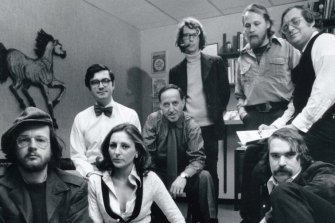 Drunk Stoned Brilliant Dead: The story of the National Lampoon.

The story of the magazine is an eventful one full of big personalities but Tirola maintains a clear narrative, even when the Lampoon expands into record albums, live stage shows and movies; making household names of John Belushi, Bill Murray and Chevy Chase. A must-see. 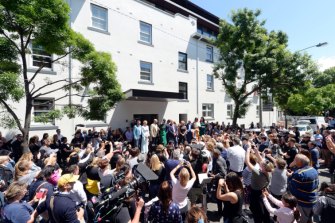 Contestants of The Block at the former Gatwick Hotel at auction day in St Kilda, Melbourne in October 2018.Credit:Martin Philbey

For decades the Gatwick Hotel on Fitzroy Street, St Kilda, was the last resort for many of Melbourne's most vulnerable – the homeless, the addicted and the mentally ill. Hated by local shopkeepers and regularly pilloried in the media, it closed forever in 2017 – subsequently being turned into a bunch of expensive apartments on The Block.

This affecting documentary chronicles the hotel's last years, with owners Rose Banks and Yvette Kelly and many of the hotel's residents providing poignant reflections on what the place has meant to them.