Off to the races! Camilla is elegant in a black-and-white ensemble as she arrives for British Champions Day at Ascot

The Queen Consort looked effortlessly elegant in a monochrome ensemble as she arrived at Ascot racecourse for British Champions Day.

Camilla, 75, chose a chic black-and-white midi dress for the special occasion in Berkshire this afternoon.

Braving the temperamental British weather, the future Queen finished off her look with a linen-blend matching hat, opaque tights and black suede heels. 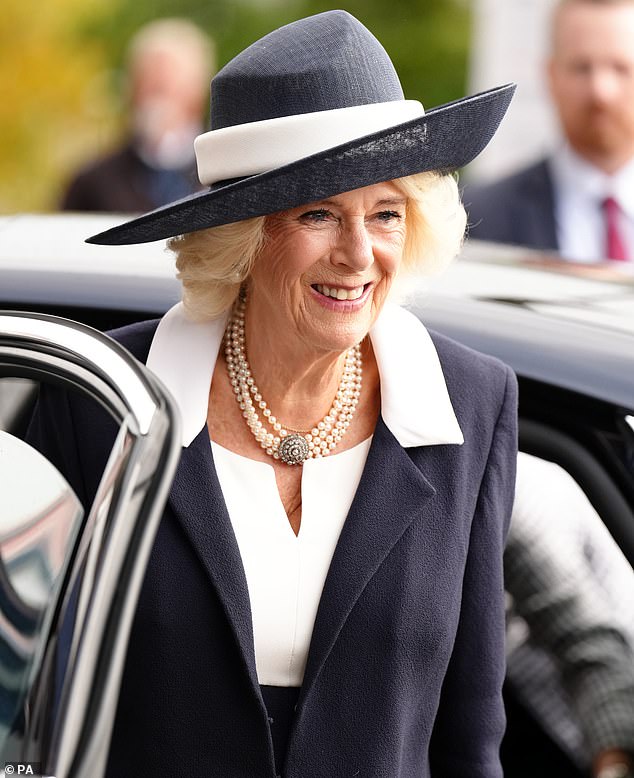 Finishing off her look, Camilla styled her blonde hair in her signature waves and wore her four-stand pearl choker with a round diamond clasp.

A hugely passionate racing fan, Camilla is attending the last events in the sporting calendar year this afternoon.

Last month, the Mail on Sunday reported that Camilla is set take over the reins from the late Queen as the Royal figurehead of horse-racing – a passionate she shared with her mother-in-law.

A senior racing source said: ‘I think now it will be Camilla – she will be the figurehead. The plan has always been that Charles and Camilla would take on the legacy. 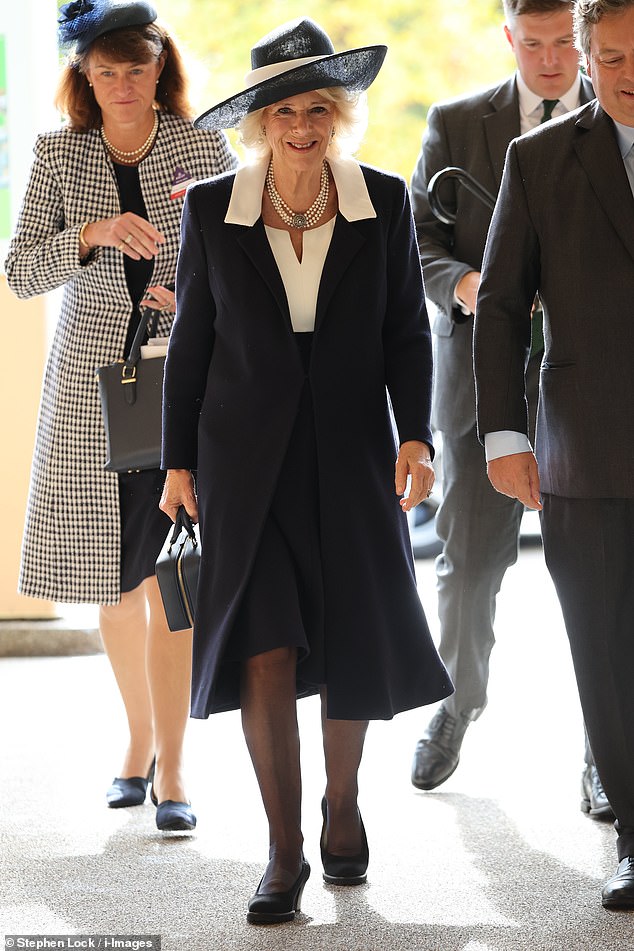 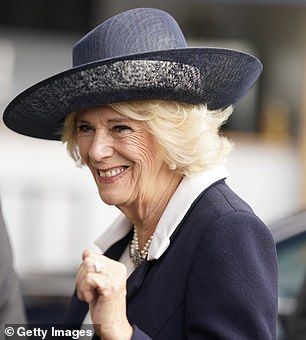 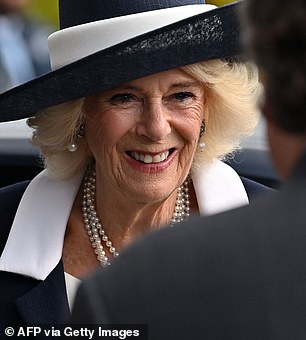 ‘Camilla obviously adores horses and is hugely passionate about racing.

‘She really loves it, particularly Cheltenham – the jumps. I think there’s a pretty clear plan, given the Queen’s passion and love for racehorses.’

Charles and Camilla are committed to ensuring the continued success of Royal Ascot in Berkshire.

The King has inherited about 24 racehorses and some 80 brood mares plus the Sovereign’s racing colours: purple body with gold braid, scarlet sleeves and black velvet cap with gold trim.

The Princess Royal and Zara Tindall may wish to have first pickings of the mares but their main interest is eventing horses not racehorses.

Although Charles was a keen amateur jockey in the 1980s, his involvement has been nominal – leaving space for his wife to become the Royal Family’s racing figurehead. 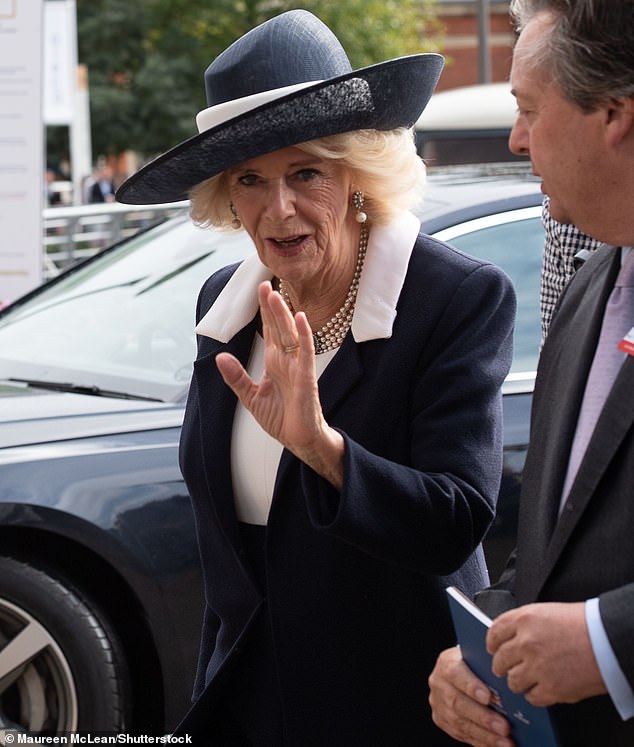 Finishing off her look, Camilla styled her blonde hair in her signature waves and wore her four-stand pearl choker with a round diamond clasp 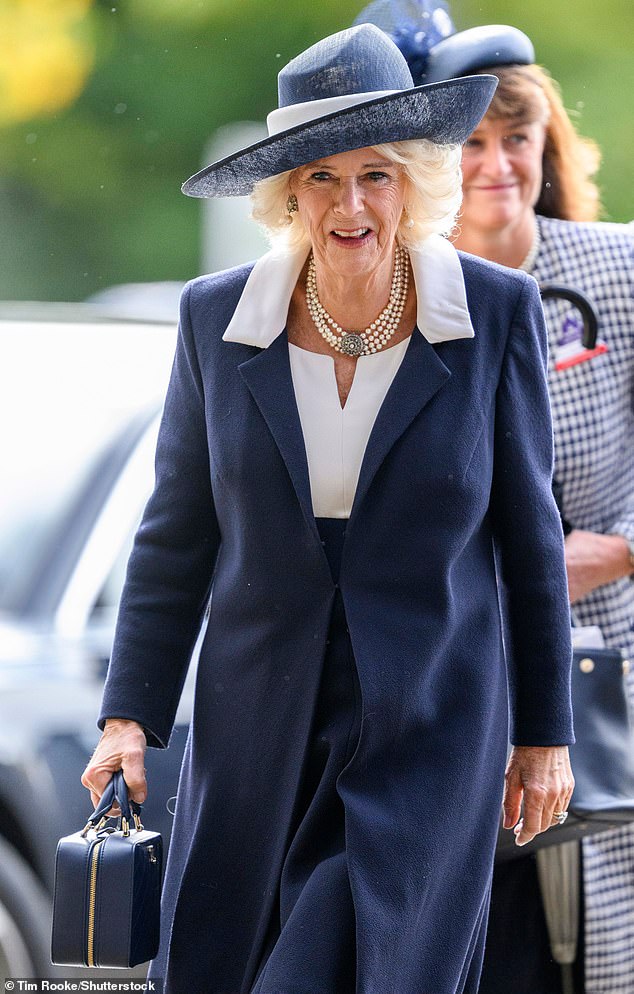 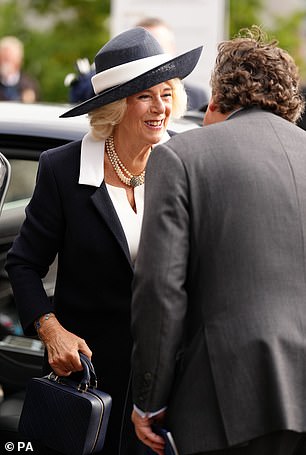 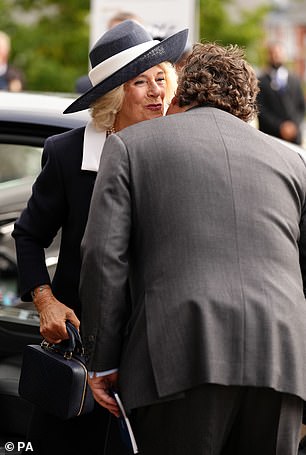 Today’s appearance from Camilla comes after it emerged royal palace aides are reportedly hoping to quietly drop ‘Consort’ from Queen Consort Camilla’s title ahead of King Charles’ coronation in May 2023.

The decision will ultimately be dependent on how warmly the public accepts Camilla as she steps into her new role over the coming months.

Queen Elizabeth II publicly announced at her Platinum Jubilee in February Camilla would receive the title of Queen Consort when Charles acceded the throne.

And speaking after his mother’s death last month, the new Monarch referred to his wife as such, stating: ‘I count on the loving help of my darling wife, Camilla. In recognition of her own loyal public service since our marriage seventeen years ago, she becomes my Queen Consort.’

But a new report from The Telegraph suggests aides would be more than happy to drop ‘Consort’ from the title if there is public appetite to do so.

A source told the publication there is hope of a natural transition in which the public and the press begin adopting the simpler, shortened ‘Queen Camilla’ title.