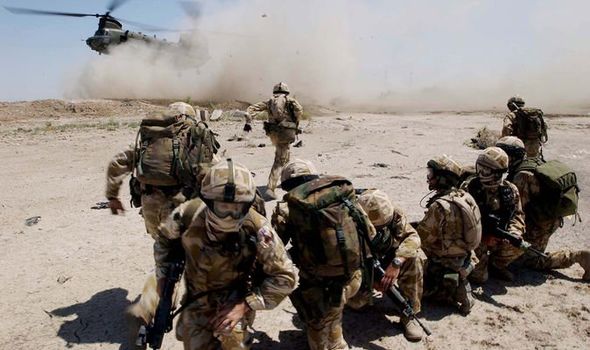 It was bone-chillingly cold as I rooted around in my backpack, my mind on the other two Bravo patrols in Iraq. Going in on foot, they would have taken less kit. In an elite soldier’s mindset, when told he’s deploying into an “English spring”, cold-weather gear is the last priority. With sub-zero temperatures and a biting wind, I shuddered to think what state they would be in.

Then our radio operator Will McBride ‑ nicknamed “Chewie” for his vast size ‑ managed to get our first news of how those guys were faring.

It was an “advisory” from HQ, and while jumbled, there was news of Bravo One Zero and Bravo Two Zero.

This was January 1991, the First Gulf War, and, with two Land Rovers and eight SAS troopers, we were four days into mission Bravo Three Zero ‑ hunting Saddam Hussein’s Scud missiles in the Iraqi Western Desert.

So far, we’d called in one airstrike and nearly been incinerated by what had to be “friendly fire” and had yet to fire a shot in anger. Now we gathered, aghast, as Chewie delivered the news.

One patrol, Andy McNab’s Bravo Two Zero, had been compromised and all eight were missing in action.

As for the second patrol, Patrick Johnson’s Bravo One Zero, it looked like they hadn’t even deployed.

As we would later discover, the Bravo One Zero guys had walked down the open ramp of the Chinook, surveyed the murderous terrain and told the pilot to fly them to an alternative drop zone.

Finding it no better, they’d made the decision to abort. The call had been the right one, but it had taken real balls.

Had they deployed, it stood to reason they would have suffered the same fate as McNab’s patrol, which would mean we’d have 16 men missing in action.

Johnson’s actions had very likely saved his patrol, but there would be those who would slag him off for making a “bad call”.

It was the kind of decision a medal should be given for. But for now, we sat in stunned silence. Chewie had more. We began to get a sense of just how deeply the Regiment was in the s***.

One of A Squadron’s Pinkies (as we had dubbed our open-topped Land Rovers) had been caught in a tangle of barbed wire. The noise had alerted the enemy and all hell had let loose.

The guys in the wagon had let rip, while trying to drive out of the contact. In the process, their vehicle had gone into a ditch. Staff Sergeant Baz Matthews had been hit in the thigh and lower leg.

With the enemy closing in, they’d prepared to make their final stand. Then Baz had done an exceptionally brave thing. Although barely conscious, he’d ordered the others to leave him.

This hit me hard. If an SAS legend like Baz Matthews had been taken out, when serving as part of a squadron-size force, what chance did we stand?

Our patrol commander, Sergeant Jim Dickson, called us together.

“What next?” I ventured. “Simple.” Jim eyed each of us. “We hide in plain sight. We find some Scuds. We report them in. The mission hasn’t changed.”

Jim was right. We were here now, deep in it, and no one was going to get us out but ourselves. Not that I rated our chances highly.

But you know something? When you think you’re as low as you can get, Murphy’s Law ‑ if it can go wrong it will ‑ always seems to come into play.

Barely had Jim finished speaking when it started to snow. Big white flakes gusted from the skies, blanketing everything in a crust of white.

It was becoming painfully clear our main enemy wasn’t the Iraqis ‑ it was the weather. We were moving at a snail’s pace, tyres crunching through snow. Suddenly, up ahead I saw our lead vehicle break through the crust of white, and kangaroo across what had to be a massive crater.

One moment it was trundling along, the next it plunged through and went down hard. “WATCH OUT!” I yelled at Lance Corporal Phillip Jeans, an ex-Para nicknamed Driller, worried he was frozen stiff and half-asleep at the wheel.

I’d done him a disservice.

He’d seen what was coming and was wrenching the wheel around, putting our overloaded wagon into a tight turn. But the crater must have been seriously large, and we hit the very deepest part.

BANG! The front end punched down and came back up again like a bucking bronco. As the second set of wheels hit ‑ KERBANG! ‑ I saw Lance Corporal Trev Moriarty practically catapulted free of the rear. How he held on I’ll never know.

We pulled up on the far side to inspect the damage. By feel alone Driller could tell the underside had taken a hammering, but without light he couldn’t say more.

We were in the middle of a dark, snowbound wilderness hundreds of miles behind enemy lines, and the last thing we wanted was to start flashing torches.

We’d have to press on, and pray that the wagon would hold together. But I was worried sick about the weather. Guys would be going down with hypothermia.

We’d eventually laid up and, come first light, no one had died. But our water bottles had frozen solid and there was a thick layer of snow. We tried to get a brew on with painful, cracked hands.

With the charcoal effect from the nuclear, biological, chemical protection suits we’d been forced to wear for warmth, our skin was blue-black. I didn’t doubt that we had frostbite.

The desert seemed eerie, cloaked as it was in a silvery blanket. If I hadn’t known better, I’d have thought we were on Arctic operations. We forced stiff limbs into motion.

After a week’s solid driving and trying to survive in such horrendous conditions, we were exhausted. Then we heard it: the grunt of an engine.

Despite our pitiful state, the adrenaline started pumping. Something hove into view. A truck. And not a Coalition vehicle, which only left one option: the enemy.

We were still under the camo nets, with a good thatching of snow, so there was every chance they wouldn’t see us. I saw the truck pull to a halt not 150 metres off.

Somehow we’d been spotted, though I couldn’t for the life of me imagine how. My mind started racing.

Was this the trigger for some kind of a planned attack? Were we surrounded, and about to get whacked?

The driver got down and started walking towards us, and then suddenly he was heading back towards his vehicle… at speed. It was obvious what had happened. He’d realised we weren’t Iraqi forces waiting for an early-morning water delivery.

I got the truck cab bang in my sights, as my finger started to gently take up the pressure on the trigger. Then a thought struck me.

The guy is dressed in civvies. Could I really blow the hell out of him and his truck and live with myself afterwards?

I lowered the weapon. As I did so, I saw other guys doing the same. Seconds later the driver fired up the truck and started chugging out of there.

Had we done the right thing? Had we bottled it? Should we have blown him away regardless? It was Jim who broke the silence.

“Right, lads, that’s it. Cam nets down and let’s get the hell out of here.” We knew we’d been compromised. Only one thing for it. Time to run for the border.

After an hour or so we stopped to perform a listening watch. I spotted the dull glint of sunlight off glass. We had vehicles to our rear. It could only be the enemy.

I figured they were maybe a kilometre and a half away, which would put us within range of their heavy weapons ‑ if they’d spotted us.

As we eyed the enemy vehicles, they seemed to be executing a search pattern. It looked as if they’d lost our tracks, but that wouldn’t fox them for long.

Jim ordered us to mount up. We climbed aboard our wagon and sat there, waiting for him to take up the lead. But it wouldn’t budge. “B****** wagon!” Jim hissed. “This time it really is finished.”

Suddenly, I had a brainwave. We had a chain. It was bat****-crazy and very far from standard operating procedure, but we slung that chain across and began towing the dead wagon and its crew behind us, as we tried to make our getaway.

Jim added a gloss to the DIY-tow-truck escape plan. Checking our maps, he figured we should head for the open road, the one leading directly to the Saudi border.

On the highway we might just make it ‑ as long as we avoided the Iraqi military, our SAS brethren, plus the scores of high-tech US warplanes quartering the skies.

Moving in daylight, it couldn’t be long before we started taking hits. It was a horribly exposed feeling. No matter how much the enemy vehicles kept closing the gap, Driller couldn’t get any more speed out of the wagon.

Finally, we parked up where we could best conceal the wagons, and moved a good 200 yards away. That way, when the bullets started to fly, at least the enemy mightn’t lay eyes on the vehicles.

We got into a snap ambush, the two Minimis, our handful of LAW 66s and the M203 grenade launchers ready to let rip. From what we could see, rather than coming at us head-on, the enemy were trying to get behind us; to surround us.

I flashed back to comments Driller had made about saving a final bullet for each other. Dark thoughts. We were facing imminent death, as I had done many times before in the Regiment.

So maybe there was a chance? Muzzles sparked. Probing bursts of fire laced across the landscape. To left and right there were the snow-muffled pops. Then the enemy seemed to have gone static. After an hour, we could wait no longer.

If the Iraqis weren’t going to come and finish us off, we had to get moving. Stay here, and we were going to die.

We were like rats, crawling towards the sanctuary of the border, praying that against all odds we might make it.

FOOTNOTE: There were three SAS patrols tracking down Saddam’s missile launchers. Plagued by appalling weather and equipment issues, Bravo Two Zero were famously captured and suffered fatalities. Bravo One Zero aborted the mission. Only Bravo Three Zero supplied the intelligence to take out the Scuds.