It’s 15 years since Tina Brown – sometime editor of everything from Tatler to The New Yorker – published her enthralling saga The Diana Chronicles, and now she’s written another technicolour extravaganza about the House of Windsor which not only brings to its highest point of realisation everything about Princess Diana and Prince Charles and the Duchess of Cornwall but also includes long sections on William and Kate and Harry and Meghan and the whole “Megxit” caper.

It’s a very mixed bag, but it’s liable to have its fascinations for the most casual Crown watcher. Brown is not an intellectual journalist, still less a historian, but she is a captivating storyteller and she can be wonderful with the telling quote and anecdote even though the upshot in this hugely overwritten book is far more scintillating about Diana and Charles and Camilla than it is about William and Kate, Harry and Meghan. 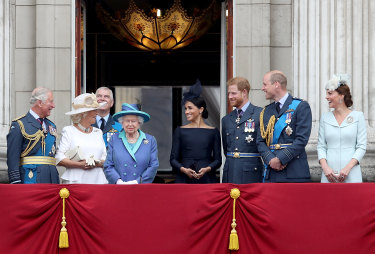 Brown’s new book spares no member of the royal family.Credit:Getty

Early on we encounter what Brown calls “the deep voice and anything goes smile” of Camilla who once said, “Nobody went to university unless you were a real brainbox. Instead, we went to Paris and Florence and learned about life and culture and how to behave with people.” As for sex, Camilla did it whereas Diana always knew she had “to keep myself very tidy” for a future husband. But Diana had her deadly side. Brown says there was never a more dangerous person to enter a loveless marriage.

The story goes that Prince Charles never stopped having sex with Camilla though he said in a famous interview with Jonathan Dimbleby that he had tried to be faithful. The Queen was frozen with disgust and Prince Philip, the Prince of Wales’ formidable father who had forced him to go to that tough school Gordonstoun, speculated that his son was “not King material.”

A year earlier there had been the Camillagate tape in which the world heard Charles say to his married mistress that he wanted to be her “Tampax”. Diana, of course, had her revenge with the Martin Bashir interview, in which she declared there were always three people in the marriage.

At some point late in the book, Brown, when she is delineating Prince Andrew’s follies, says he suffers from a syndrome where he imagines he is far more intelligent than he is. It’s hard not to be grateful to Brown for reminding us that the Queen got on like a house on fire with Lucian Freud when he painted her portrait because they could rave about racehorses together. And who would not feel awe at the news that the Queen Mother –who Hitler described as the most dangerous woman in Europe– used to do Ali G impersonations? 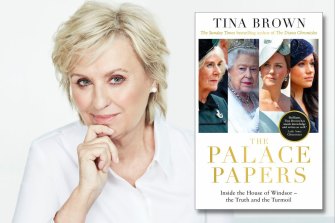 She’s brilliant, too, on the prosecution of Paul Burrell, Diana’s butler, who was accused but ultimately acquitted of stealing all sorts of precious possessions of the dead Princess. Charles is terrified at what could be revealed but then the Queen puts a stop to it.

Brown is wonderful when she tells us that the Queen said, when asked by Charles as a boy if she could come and play with him, “If only I could.” Just as she is wonderful at relaying Princess Margaret’s question to her sister, “Are you resigning today, Lilibet?” When Margaret died, the eyes of the almost always expressionless Queen glistened with tears.

With Diana, Brown is everywhere alive to the contradictions. Diana might have disclosed that she hoped former lover James Hewitt’s “cock shrivels up” but she in fact urged him to collaborate with Anna Pasternak for her book Princess in Love just as Nicholas Coleridge, the former head of Condé Nast, confirms that it was Diana who tipped off the paparazzi that she was supposedly oppressed by.

Brown tells the story of how she sat with Vogue editor Anna Wintour listening to Diana tell the story of her tragic marriage to Charles “with an irresistible soulful intimacy that sucked us in” and then switched to a very canny and sophisticated account of how she was going to use her celebrity to push her causes. Brown has an empathic relationship for the glitter and glamour of a figure like Diana partly because she has an instinctive reverence for worldly success and the long trail of vast fame as values in themselves.

The paradox of this is that she is hyper-conscious of how much Diana “loved to dance with danger” – how she would come very close to causing a fatal accident in a car as she flirted with the press and how the ultimate accident which killed her would never have happened if an expert and sober driver of limousines had been at the wheel.

She was not destroyed by the press – at least not without partaking of the deadly pas de deux – though this is the myth she bequeathed to William and Harry. We hear the story of the lunch with Piers Morgan where Diana says he can ask anything and William, a boy of 13, says he wants a glass of wine, is told he can’t have one, and then does anyway.

The difficulty with The Palace Papers is that the latter part of the book is less good, largely one suspects because there is a lot less information. We’re conscious with the old-timers of Prince Charles’ capacity for self-pity. Camilla comes across as a formidable, kindly woman who has a low tolerance of his pretensions and is forever saying, “Charles, let me pour the gin and tonic,” when he’s asking some servant to. And they have been in love for a long time and laugh and dance together in a way that does warm the heart.

The Princes, though, are a different proposition. Brown gives a detailed account of how Kate Middleton and William got together and in the absence of much intimate information she pushes the line that the young woman from a middle-class background was always on the make. With what verges on literary pretentiousness she says: “A Trollopian longing for social validation and an irrepressible desire to marry up cannot be overestimated even if it bubbled serenely below the surface.” Earlier there’s a moment when William declares, “All the fun has gone. I don’t want to be nailed down”, but these are slim pickings with this pretty happy union.

She has more colour to conjure with Meghan and Harry. We hear how her passion to hit the floor running filled the Palace with dread. Her vision of herself as a global celebrity pushing enlightened causes makes an old Palace hand say that Meghan is “very strong, very motivated, brought up to think she can change the world. It’s a very American type; we don’t have them here.”

Brown says that Harry has no conception of the fact that he’s famous only because he’s a prince, not because of his personal qualities, and that the interview with Oprah Winfrey was disingenuous. Harry and Meghan did not get what they wanted from the House of Windsor. They’re off on a frolic of their own with their Netflix deals but without the duties or the financial backing of functional members of the royal family. The Queen made a sharp distinction between being a loving grandmother and her steely resolve as a sovereign.

At the end of the day, she will always opt for the Crown. Brown’s one warning note is about the seemingly utterly safe Prince William and the Duchess of Cambridge. “In the unlikely event that the Cambridge marriage ever becomes troubled, the whole Windsor House of Cards could come tumbling down.”

The Palace Papers: Inside the House of Windsor – the Truth and the Turmoil by Tina Brown is published by Century, Penguin Random House, $35.00.

The Booklist is a weekly newsletter for book lovers from books editor Jason Steger. Get it delivered every Friday.