Q: What’s got 23 letters, three spaces and one ampersand and is all but guaranteed to set the hearts of the nation’s nerds a-racing?

It sounds like one of those star tours of Hollywood, only for postal workers. No, it’s the return of a show SBS “rested” in 2012. 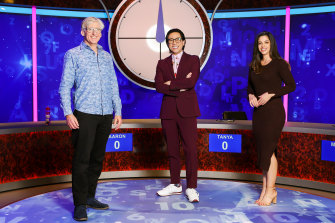 Rested? That sounds like Rip Van Winkle territory. Well, yes. But nothing captures the imagination of a TV programmer like a zombie format – an old show that’s been brought back from the dead.

Why this one? The original series ran for six seasons between August 2010 and June 2012. By the time SBS made the decision to drop it, its ratings weren’t great. But the 450 episodes filmed back then have been in constant repeat on the network (it’s on right now at 5.30pm weekdays), and still do tolerably good business. Wednesday’s episode was watched by 85,000 people in the mainland capital cities, making it the station’s seventh-most-watched show of the day. It’s popular with SBS On Demand viewers too. It clearly has a loyal following (or at least one with short-term memory loss), and SBS director of television Marshall Heald says, “the revival of this cult quiz show is a testament to its dedicated fans”. Which we’re pretty sure is code for, “stop emailing, already – you’ve got what you wanted”. 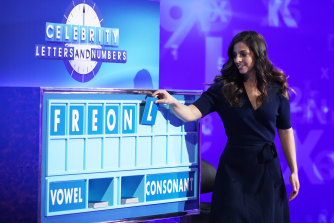 Mathematician Lily Serna has been brought back for the reboot.Credit:SBS

But what exactly is it?
It’s a quiz show, built around tasks involving … well, we don’t really have to spell that out, do we? It’s based on a French show called Des Chiffres et Des Lettres (literally: Numbers and Letters), which has been running since 1965, and a British version called Countdown, which first aired in 1982. When the local version debuted in June 2010 host Richard Morecroft said, “We’re hoping the show will be just as popular here”. Close, but no rolled bundle of dried and fermented tobacco leaves made to be smoked (that’s “cigar”, for those of you playing along at home).

Are the original hosts coming back? Yes and no. There’ll be no Morecroft – actor-comedian Michael Hing will be in the host’s chair this time around – but David Astle (aka the world’s meanest cryptic crossword compiler) will be back on the letters side of the fence and mathematician Lily Serna is once again handling the numerical part of the equation.

Apart from the new host, is it just a straight rehash? Nope. Attentive readers will have noticed the word “celebrity” in the title. The original had two competing brainiacs battling it out for the honour of taking home a Macquarie Dictionary. In this revamped version, two teams of two – three celebrities and a “special guest” – will battle it out for a unique prize: “One single book,” SBS promises, “from a vintage 1980s encyclopedia collection, generously gifted by Michael Hing’s parents after they cleaned out their garage”.

One for each episode? Is this a 450-volume encyclopedia then? Sadly not. TV budgets ain’t what they used to be, so this time it’s just 12 episodes per season. But at least there are two seasons.

So, other than the new host, the celebrity angle, the short run, and the mouldy old book prize, it’s exactly the same? You forgot the skewing towards comedy, with guests announced including Hamish Blake, Merrick Watts, Matt Okine and Jennifer Wong. But other than that, yep. Identical.

OK. I’m going to write to SBS, but I’m not sure whether it’ll be to say thanks or to complain. Guess you’ll just have to wait till it starts, Saturday, October 2 at 7.30pm, to decide.