Black women were exactly where they needed to be at the 2021 BET Awards on Sunday: on top, slaying the game and receiving the flowers they deserve.

From multifaceted icon Queen Latifah getting the Lifetime Achievement Award to Megan Thee Stallion’s dynamic “Thot S**t” performance to Lauren London honoring Darnella Frazier, who was 17 when she filmed George Floyd’s murder, the night was dedicated to uplifting and celebrating Black women.

Hosted by actor Taraji P. Henson, the theme for this year’s awards was “The Year of The Black Woman.” Ahead of the show, Henson told HuffPost that she’s honored to be hosting the award show with such a powerful theme.

“Like Malcolm X said, we were just the most disrespected neglected, unappreciated. Tonight, what we’re going to do on BET? We’re going to uplift all the queens,” she said.

Rep. Maxine Waters (D-Calif.), Issa Rae, Jazmine Sullivan, Zendaya and other Black women celebrities sat in the front row at the show, which took place at the Microsoft Theater in Los Angeles. Henson honored the women in attendance with flowers. She also honored those not in attendance, including giving tennis star Naomi Osaka a shoutout for advocating for her mental health.

“Look at us. Look around the room. Look at this power. The grace, the class, the edges, we are everything honey. Celebrating Black women isn’t a fad or a trend, it’s a forever mood,” Henson told the audience. “And there is more than enough room for all of us to thrive. Cause can’t nobody be me like me and can’t nobody be you like you.”

“Tonight we’re also reclaiming our aesthetics, baby hairs, long blinged-out nails, yeah, we taking all that back, gold hoops, bamboo earrings. … Our Black men, we want all y’all back, because we love you, we see you, kings, and most importantly, we need you.”

Here are some of the most memorable moments from Sunday night’s show.

During Migos’ performance of “Type S**t,” which features Cardi, the Bronx rapper revealed that she and Offset were expecting baby No. 2. She donned a custom Dolce & Gabbana bodysuit with a mesh cutout showing her belly. 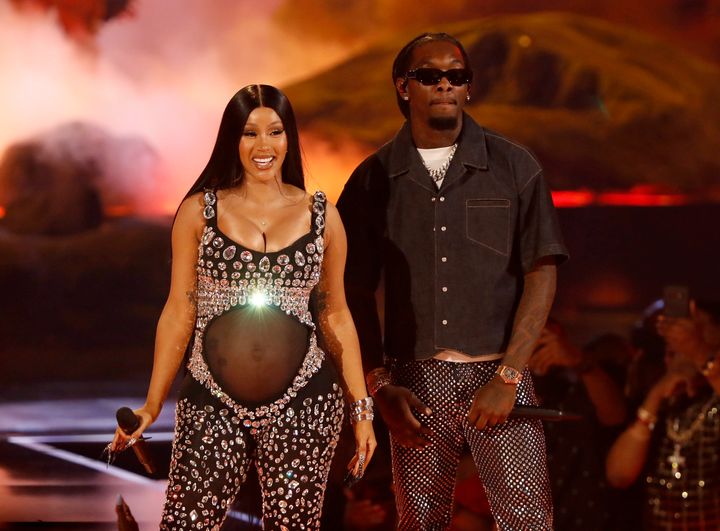 Taraji P. Henson dressed as some of her favorite Black women

Henson showed love to folks, including Diana Ross, Tina Turner, H.E.R and Erykah Badu, throughout the show. The actor wore outfits inspired by Black women important to her. She put on her acting hat and tapped into some of her alter egos to give a nod to these women. 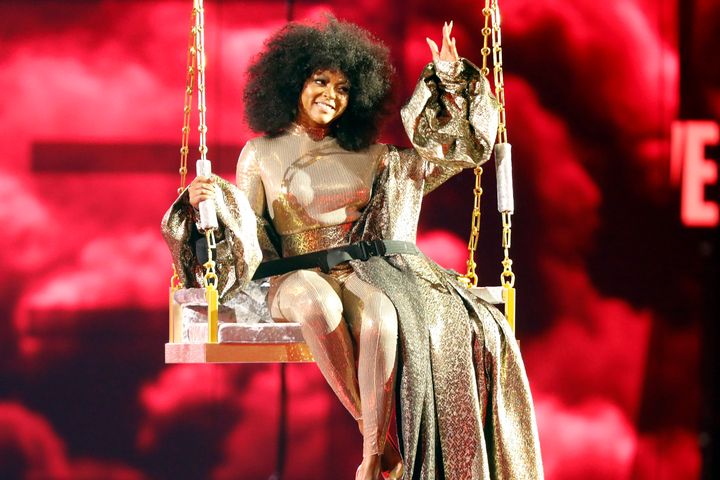 The actor has been selective about her public appearances since the death of Nipsey Hussle. At the ceremony, she announced Darnella Frazier, who recorded video of then-cop Derek Chauvin kneeling on George Floyd’s neck, as the winner of the Shine A Light Award.

“Sometimes in life, it just takes one person to prove that we play a large part in getting the accountability we deserve. She didn’t set out to change the world, she set out to do what was right,” London told the audience. 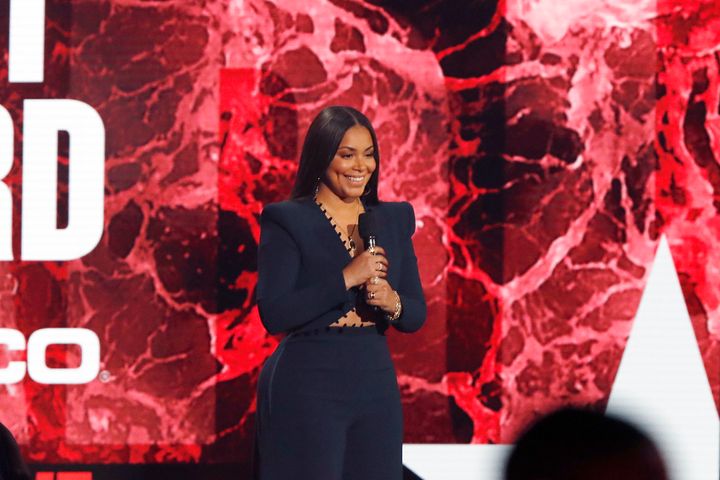 H.E.R. put her musicianship on full display. The Grammy-winning artist, who was also celebrating a birthday Sunday, not only performed her single “We Made It,” but she also played the drums and electric guitar during her set.

She also took home the award for Best Female R&B/Pop Artist. In her acceptance speech, she shined a light on the importance on the BET Awards. 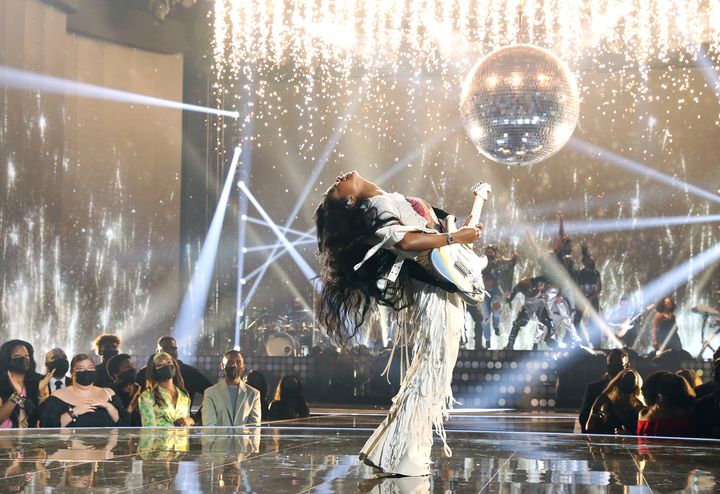 The Houston hottie was on a winning streak on Sunday as she snagged the awards for Best Female Hip-Hop Artist, Video of the Year with Cardi B for “WAP,” and Viewers Choice Award with Beyoncé for “Savage (Remix).”

During her acceptance speech for Best Female Hip-Hop Artist, she paid tribute to her mom, who died in 2019 just as Megan’s star was ascending. She said her mom is the reason she started rapping.

“She can’t be here with me today but I still think about her every day and she is the reason why I keep going,” she told the crowd. 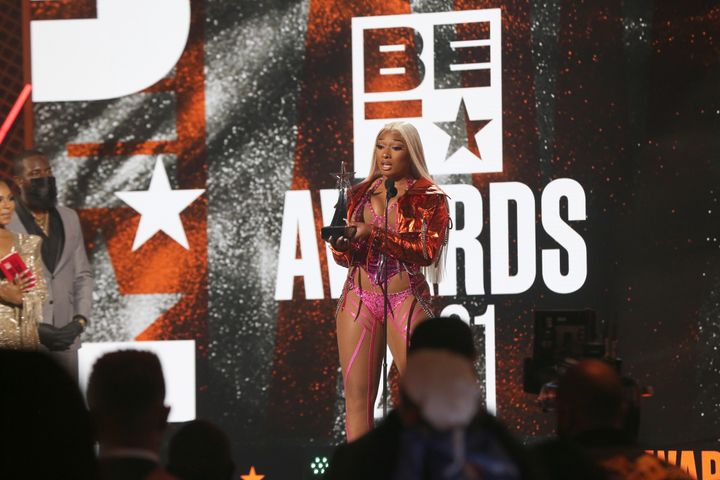 BET honored the actor-rapper-producer-mogul with the highest honor of the night, the Lifetime Achievement Award. She got her long overdue flowers for her impact on Hollywood, and especially on Black women. MC Lyte, Rapsody, Lil ’Kim and Monie Love took the stage to perform “Ladies First” and “U.N.I.T.Y.” before Queen accepted her award. She brought her father and a photo of her late mom with her as she gave her speech.

“I want to thank BET for creating an outlet for beautiful Blackness to thrive, to shine, when we couldn’t get played on the radio and other places,” she said. “We couldn’t get our videos played in other places; there was BET that allowed us to be in our fullness and to shine.” 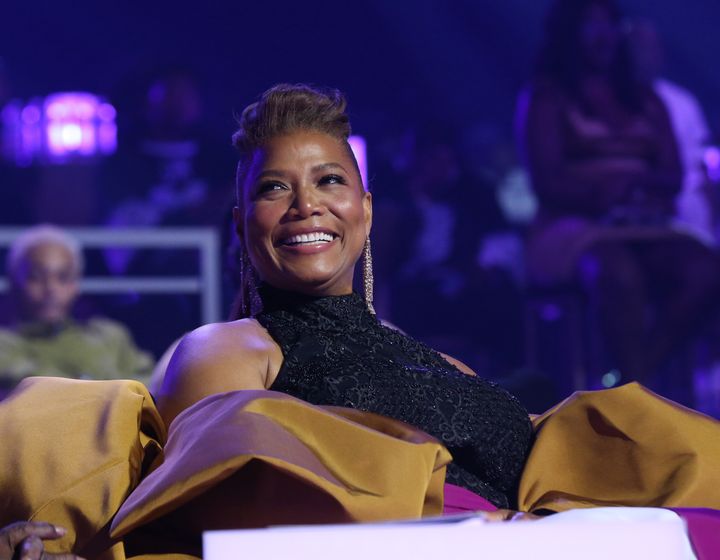 The two powerhouse vocalists joined forces to give their first live performance of “On It,” from Sullivan’s latest project, “Heaux Tales.”

Sullivan, whose performance kicked off with a “reclaiming my time” moment from Maxine Waters herself, also won a big award later in the night, receiving the award for Album of the Year. She also brought her mom onstage to accept the award with her, opening up about her journey with breast cancer.

“My mom was diagnosed with breast cancer two years ago so we didn’t see any of this happening, but God has been so faithful to us and my mom is in remission,” Sullivan said. “This is my prize. This is my gift. It means more to me than anything that she’s here with me. She supported me all my life.” 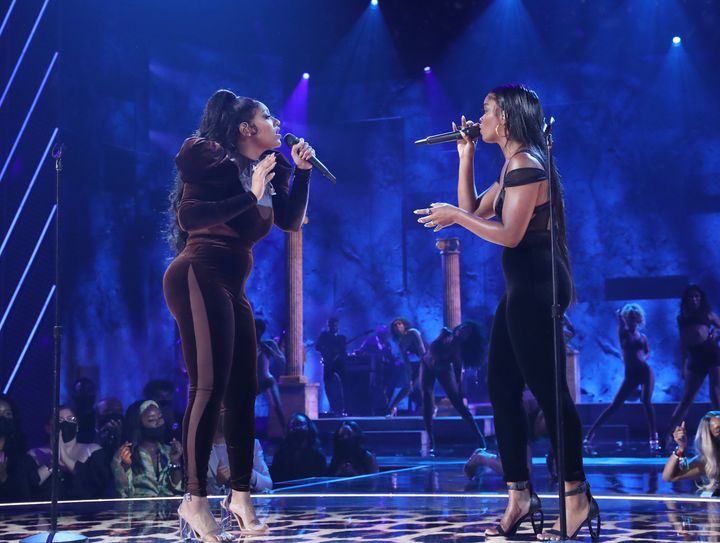