Australian special forces soldiers allegedly committed 39 murders in Afghanistan, and 19 current or former soldiers will face possible prosecution and the stripping of their medals after the findings of an exhaustive defence inquiry exposed a culture of cover-ups and deceit.

The Special Air Service Regiment's second squadron will be disbanded following the damning findings of a "warrior-hero" culture that contributed to criminal conduct, including unlawful killings. 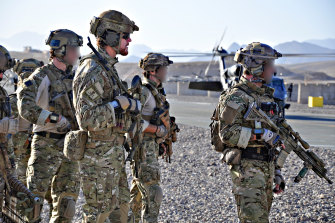 SAS operators including Ben Roberts-Smith, who has previously been named as a focus of the investigation, in Afghanistan in 2010.Credit:ADF

Mr Roberts-Smith is suing Nine, The Age and the Herald for stories about his service in Afghanistan and Mr Stokes has loaned him $1.9 million to cover his legal costs thus far. Mr Roberts-Smith has used his Victoria Cross and other medals as collateral, and Mr Stokes' spokesman told The Australian Financial Review he would donate them to the War Memorial if the war hero could not repay the loan.

The alleged murders referred to by the Brereton report date back to 2006 but the majority took place in 2012 and 2013 and were committed by soldiers from the Perth-based SAS.

The four-year inquiry by NSW Supreme Court Of Appeal Justice Paul Brereton found there was "credible information" about 23 incidents during which Australian special forces soldiers were involved in the murder of one or more non-combatants or individuals who had been captured or injured. A further two incidents could be classified as the war crime of "cruel treatment", the report said.

The report said there was evidence that 25 current or former ADF personnel were involved in the serious crimes, either carrying out the offences or at least being "accessories" to the incidents. However, in his report Justice Brereton has issued orders preventing the naming of witnesses or those he will refer to police.

Australian Defence Force Chief Angus Campbell said the inquiry had unearthed a "disgraceful and a profound betrayal" of the Australian military's professional standards. He will now refer 36 matters to the Office of Special Investigator – a new body announced by Prime Minister Scott Morrison to prosecute the alleged war crimes.

Current serving members of the ADF who are now subject to allegations of murder could face immediate action, but Defence will wait for the outcomes of prosecutions before stripping them of their individual medals.

The voluminous classified report, along with a publicly released summary, is based on more than 20,000 documents, 25,000 images and 423 interviews with soldiers and officers from SAS and Commandos, Afghan villagers, special forces interpreters and support staff.

The report was scathing of patrol commanders of the Special Operations Task Group – corporals and sergeants – where the "criminal behaviour was conceived, committed, continued, and concealed". Commanders further up the chain of command who are found to be negligent may also face disciplinary action. 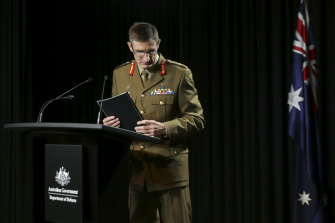 Justice Brereton, who was appointed by the Inspector-General of the ADF in 2016 to investigate pervasive rumours of war crimes in Afghanistan between 2003 and 2016, found commanders higher up the chain should bear a "moral command responsibility" for a culture that allowed the alleged crimes to take place.

He found that none of the incidents could be classified as disputable decisions made under pressure in the "heat of battle".

The inquiry found credible information that some special forces soldiers planted "throwdowns" such as pistols, small hand-held radios and grenades on the bodies of those allegedly unlawfully killed to cover up their conduct. The Brereton report also found evidence that junior soldiers were required by their patrol commanders to shoot a prisoner to achieve their first kill, in a practice known as "blooding".

The allegations of throwdowns, executions, bloodings and cover-ups were revealed in multiple stories by this masthead over the past three years.

Key recommendations of the Brereton inquiry

The referrals to police by Justice Brereton will lead to years of investigations and potentially lengthy trials in what looms as an unprecedented challenge for the AFP and prosecutors, who will need extra resourcing and expertise as they attempt to secure the first war crimes convictions in recent Australian history.

General Campbell said the ADF was "rightly held to account for allegations of grave misconduct by some members of our special forces community on operations in Afghanistan".

Apologising to both the Australian and Afghan people, he said Justice Brereton's report "details credible information regarding deeply concerning allegations of unlawful killings by some", but asked Australians to "remember and have faith in the many".

General Campbell said the problems started with a "self-centred warrior culture" inside the SAS, which had "a misplaced focus on prestige, status and power, turning away from the regiment’s heritage of military excellence fused with the quiet humility of service".

"The report notes that the distorted culture was embraced and amplified by some experienced, charismatic and influential non-commissioned officers and their proteges, who sought to fuse military excellence with ego, elitism and entitlement."

As units became consumed with preparing for and fighting the long-running war in Afghanistan war, General Campbell said "much of the good order and discipline of military life fell away" and "cutting corners, ignoring and bending rules was normalised".

"What also emerged was a toxic competitiveness between the Special Air Services Regiment and the 2nd Commando Regiment – destructive of trust, cohesion and mission, and a disgrace to both".

"In this context, it is alleged that some patrols took the law into their own hands: rules were broken, stories concocted, lies told and prisoners killed."

The Brereton report sets out a number of de-identified killings that are believed to be war crimes, with one case completely redacted. General Campbell said the incident was fully redacted for legal reasons but described it as "utterly disgraceful".

"In time – in the time of history to be written – it is shameful," he said.

General Campbell said the SAS's second squadron would be struck off the Army's order of battle and reformed and renamed, "not because it was the only squadron involved in these issues, but because it was at a time one of the squadrons".

Striking that squadron title from the Army order of battle would be a "permanent record" of its shame, he said, and he would write to the Governor-General requesting he revoke the meritorious unit citation for the entire Special Operations Task Group between 2007 and 2013.

"The Chief of the Army will work over time to adjust and then re-raise a different squadron, titled differently."

The Chief of Army, Lieutenant General Rick Burr, said in a statement late on Thursday that future generations would be "reminded of this moment in our military history from the gap in our squadron numbering system".

"As I continue to analyse the extensive findings, be assured that where there is evidence of misconduct, individuals will be held to account. This may be through disciplinary or administrative action."

Defence Minister Linda Reynolds said the report contained a range of "very serious matters that the Chief of the Defence Force must now comprehensively respond to". 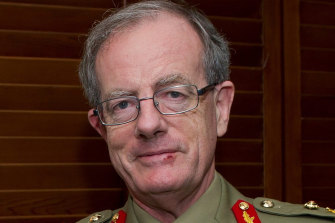 "Accountability will be the cornerstone of Defence’s response to the inquiry report."

Save the Children Australia deputy chief executive Mat Tinkler said the public release of the report, and the prosecutions that should follow it, were "critical to the delivery of accountability and justice for the shocking violations which have occurred in Afghanistan".

"We know that all wars are wars against children, but it is truly devastating to learn that there have been atrocities committed against children by Australian soldiers," Mr Tinkler said.

Kevin Rudd, who was prime minister when some of the incidents took place, said the report's findings represented "flagrant violations" of Australia's legal obligations under the Geneva Conventions and the Laws of Armed Conflict.

"I am utterly disgusted by the findings of this report detailing accounts of cold-blooded murder by members of our armed forces," Mr Rudd said.