The Albanese government has broken the curse. The curse that has held Australia in thrall to the resources sector ever since the Rudd government was destroyed in its efforts to impose a resource super-profits tax.

The gas industry worked itself into hysteria over the past week. It raged and blustered. It pulled out of its agreement to guarantee gas supply to the east coast of Australia. And it threatened Anthony Albanese with a $20 million ad campaign and an investment strike. 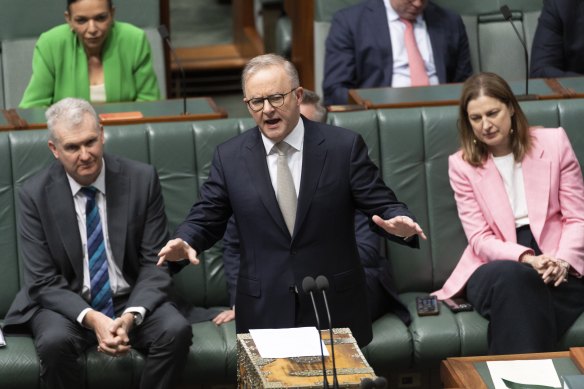 Albanese is standing up to the might of industry. Credit:

And who could blame it? It’s what we trained the resources sector to do. Australia’s political system has rewarded precisely this sort of bullying in the past by meekly surrendering.

Not only the resources sector but vested interests in general. Remember that soon after Rudd’s fall, Julia Gillard proposed some modest regulation of poker machines. When the clubs industry attacked, Gillard surrendered without a fight.

Under successive prime ministers, Australia tried to break two of the great addictions that have gripped it from the outset – resource dependency and gambling fever. And it failed.

Australia became a country too timid to act in the public interest because it was too frightened of vested interests. Until now. Albanese overruled the gas lobby to impose a cap on the price of gas sold into the Australian market for the next year.

He told the gas company bosses face to face that the threat of a $20 million ad campaign against his government was immaterial. They didn’t raise it, he did: “It doesn’t have any impact on government decision-making, just to be clear,” he told the delegation from the Australian Petroleum Production and Exploration Association, the peak oil and gas lobby, in their meeting in Parliament House this week. They had no comeback.

“I can’t sit back and allow manufacturing to disappear” as energy prices push the sector into hardship, said Albanese.

He went on to recover the parliament’s sovereignty. His government, together with the Greens and independent senators Jacqui Lambie and David Pocock, broke the curse.

“The political memory is that the Rudd government lost and if any government ever does anything that big business doesn’t like, they will threaten to do something similar,” says the eminent economist Ross Garnaut, himself formerly chair of two big mining companies, Ok Tedi Mining and Lihir Gold. “Albanese called their bluff and won. I hope this will demonstrate that a government that stands up for the public interest will win even in the face of vocal and vociferous big business opposition.”

This breakthrough should encourage the government that’s conducting the next confrontation with a powerful industry lobby. Where Gillard retreated, the NSW state government has decided to try once more – to take on the clubs and pubs over poker machine regulation.

Liberal Premier Dominic Perrottet is going to an election in March on a promise to impose a cashless card for betting on the pokies. Of course, the industry is raging and blustering.

“The clubs and pubs have run NSW politics for years,” says the anti-pokies campaigner Tim Costello. 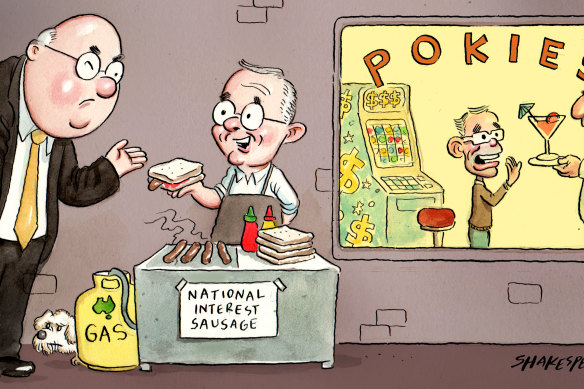 The Albanese government’s win over the objections of the gas lobby “has broken the mould”, says Costello, and “it gives me heart” that the Perrottet government can succeed.

The gas industry effort against the Albanese government would have been laughable except that it was taken at face value by much of the media, and was picked up and used by the opposition in attacking the government.

The government announced it would do two key things to moderate future gas prices. First, it would impose a cap on uncontracted domestic gas sales of $12 a gigajoule for next year. There had been reports within the industry of long-term supply contracts being offered at $40 and more.

All Perrottet wants is pokies reform for Christmas.Credit:Nick Moir

The industry claimed this would harm profits and deter future investment. “The government’s interfering is actually causing significant disruption,” said Meg O’Neill, chief executive of the biggest Australian gas producer, Woodside. The chief executive of the second biggest, Kevin Gallagher of Santos, said: “This Soviet-style policy is a form of nationalisation.”

This is just silly. The government pointed out that 96 per cent of wholesale gas sales into the Australian market last year were at prices below its legislated cap for next year of $12 a gigajoule, and that the average price last year was about $9.70.

“Those businesses were profitable, will continue to be profitable,” Albanese told reporters on Friday, “and they will also gain the windfall gains that are on the international market,” where they sell some 90 per cent of their product.

Who’s closer to the truth? There’s a ready lie detector. It’s the share price of the gas companies. Look at the market price of shares in the three biggest Australian gas producers, Woodside, Santos and Beach Energy. If you measure them from their closing price on the day before the federal budget, which was when the prospect of any federal intervention was first mooted, to Friday afternoon, Woodside shares have gained 0.4 per cent, Santos shares have lost 5 per cent and Beach Energy shares have gained 4.5 per cent.

In other words, investors don’t believe a word of the gas industry’s hot air. Those routine price fluctuations don’t look like “significant disruption”. And over the past year till Friday afternoon, Woodside shares are up 65 per cent, Santos up 13 per cent and Beach up 32 per cent. While the overall market, measured by the ASX200, is down 2 per cent for the same period. The gas firms are having a very good crisis indeed.

Soviet-style? The Australia Institute published a report this week estimating the windfall profits that the gas and coal industries have reaped from the Russian invasion of Ukraine. It’s title: “From Russia with Love.” It estimated Australian gas producers had made windfall profits in 2021-22 of $26 billion to $40 billion on their export sales. These are war profits, above and beyond the pre-war levels.

If the Soviet Union had been that profitable, it might still be in existence today.

And in the meantime, the government’s policy already is doing precisely what it hoped it would do – restrain further surges in electricity prices. In addition to the national gas price cap, federal and state governments struck an agreement requiring the states to put a 12-month cap on thermal coal prices for the domestic market of $125 a tonne.

Combined, the gas and coal caps have had the effect of pushing down the price of forward contracts for wholesale electricity for the first quarter of next year by half in the major coal states of NSW and Queensland. “This pre-emptive move by the market is a staggering real-time endorsement of the government’s efforts,” says Tim Buckley of Climate Energy Finance.

This doesn’t mean household and business power bills will fall next year. Only that they won’t rise as much as they would have without intervention. The Treasury estimates electricity prices will go up by some 20 per cent next year even after the intervention, although the $3 billion in planned state and federal electricity discounts for concession holders will take off the harshest edge.

It may be that Labor successfully has lit a bonfire of the venalities, acting against the sectional interest in favour of the national. And maybe the torch will pass successfully to Perrottet to keep the flame alight.

But the hard part for Albanese lies ahead. Peter Dutton’s opposition voted against the government plan. This gives the Coalition licence to simply blame Albanese next year when prices go up. It’ll be cold comfort for suffering households to hear Albanese say “it would have been worse” without any action by his government.

But the biggest danger for Albanese will not be the opposition. It will be Labor. Recall that Rudd would have prevailed in getting the resource super profits tax through the parliament despite the miners’ $22 million ad campaign against it. It was only when the schemers and opportunists within Labor waged a coup against Rudd that the tax was doomed. Gillard immediately neutered it.

In the time-honoured tradition, Labor’s biggest declared enemy may be the Tories but its biggest problem is itself. If it can remain united and disciplined, it will survive the bonfire of the venalities. Otherwise, it will go down in flames.

More from our award-winning columnists

Sky-high cost-cutting: Do we really need two pilots in the cockpit? With advances in technology, won’t one pilot on a flight do? Here’s what QF32 hero and ‘Sully’ Sullenberger think – Peter FitzSimons

The tea: With 61 bills passed since the Albanese government came into power in May 2022, who – or what – wins the prize for the biggest storm in a teacup? – Ross Gittins

Behind the power: When you write a book about Scott Morrison, and are more than familiar with the ways the former PM has justified his behaviour, surely you shouldn’t feel sorry for him? – Sean Kelly