Australia is considering not sending any government officials to the Beijing Winter Olympics next year amid growing calls from MPs for an official diplomatic boycott.

Australian politicians from both major parties are urging the government to boycott the Games, which will be held in China in February, as concern grows for the welfare of Chinese tennis player Peng Shuai. 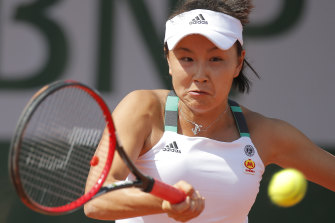 United States President Joe Biden this month confirmed his administration was considering a diplomatic boycott, which would be aimed at protesting China’s human rights record including in Hong Kong, Xinjiang and Tibet. The United Kingdom and Canada are also weighing up their positions.

A diplomatic boycott would involve not sending a delegation of officials to the Winter Olympics, but allowing athletes to participate.

The Australian government is awaiting the decision by the Biden administration before it makes a call on whether to sign up to a diplomatic boycott, with its preference to make any move in conjunction with other like-minded countries.

Under one option being considered, Australia would not send any government officials – including the ambassador to China – but decline to publicly call it a boycott. Sports Minister Richard Colbeck and Foreign Minister Marise Payne are already unlikely to attend.

Ms Peng, a former doubles world No.1, accused former Chinese vice-premier Zhang Gaoli of sexual assault then went missing for weeks. After weeks of pressure on the Chinese government over her apparent disappearance, she this week reappeared in public view via a highly choreographed release of videos by Chinese state media and a video call with the International Olympic Committee.

The World Players Association, a global union representing the world’s athletes, said on Wednesday the IOC call, which did not address Ms Peng’s claims of sexual assault, had not alleviated their concerns.

“The International Olympic Committee’s video call has not only failed to provide the necessary assurances, it has exacerbated global alarm by raising many questions that have rightly been asked by human rights organisations including Human Rights Watch,” it said in a statement.

“I believe everyone will have seen she has recently attended some public activities and also held a video call with the IOC president, [Thomas] Bach,” said spokesman Zhao Lijian. “I hope certain people will cease malicious hyping, let alone politicisation.”

Russian President Vladimir Putin is so far the only world leader to accept an invitation to the Olympics. He will become the first leader to meet with Chinese President Xi Jinping in two years when he travels to Beijing in February.

Australia sent then-sports minister Bridget McKenzie to the previous Winter Games in Pyeongchang, South Korea. If Senator Colbeck was to travel to Beijing, he would be the first minister to enter China in more than two years and after more than 18 months of no ministerial contact between the two countries.

Senator Colbeck said it was understandable that many people have raised serious concerns about Ms Peng’s welfare.

“ This is a matter that needs to be responded to with transparency and accountability,” he said. “A decision on Commonwealth representation at the Beijing Winter Olympics is yet to be made.”

“I would like to think that other like-minded, freedom-loving countries would follow suit, but it takes a leader to start on this and hopefully Australia can take the lead,” he said.

“It looks as though the United States and United Kingdom are now giving active consideration to it and I just hope that as each and every voice is added, there will be sufficient momentum for the freedom-loving countries of the world to say to this dictatorship: ‘Enough is enough’.”

Liberal senator Concetta Fierravanti-Wells said China’s actions over the years, “including its bellicose and illegal actions in the South China Sea, ongoing human rights abuses, cyberattacks and its conduct in Hong Kong and Taiwan, demonstrate that Beijing is not a good international citizen”.

“The recent situation regarding Peng Shuai has added to international concerns. Accordingly, I continue to support a diplomatic boycott of the Winter Olympics.”

Labor MP Peter Khalil said, “at the very least the Australian government should be looking at a diplomatic boycott along with their allies”.

“Yes, we shouldn’t mix politics and sport, but there does come a time when we need to draw a line.”

Liberal MP Dave Sharma, a former senior diplomat, said he was sceptical about the effectiveness of Olympic boycotts.

“Athletes should be free to make their own decisions in this regard, but I believe a high threshold must be met before governments become involved,” he said.

“The Winter Olympics in Beijing will provide greater scrutiny and transparency around Beijing’s conduct, as the Peng Shuai case demonstrates. I believe it is better to make use of this opportunity, rather than discard it.”

Liberal MP and former tennis champion John Alexander suggested he was against boycotts, saying “the whole idea of sport is it should be spreading good will”.

Independent MP and former Winter Olympian Zali Steggall said there were serious questions around China’s human rights record, but she was “on the record as strongly opposing boycotts of athletes”.

Asked whether he supported a diplomatic boycott, Defence Minister Peter Dutton on Tuesday said: “The short answer is no, but that’s an issue for others to consider, if that’s something under consideration, [it’s] not a conversation I’ve been a party to.”