Asda is cheapest UK supermarket for the SEVENTH month running: Basket of 42 everyday groceries costs £106 from the retailer – while Tesco is more expensive than Morrisons and Iceland

Asda is once again the least expensive option for British shoppers looking to keep grocery bills down this Christmas, according to new research.

Alertr – an online price tracking website – monitored the cost increases and decreases across seven major UK supermarkets – and found Asda to be the cheapest for the seventh month running.

The study also discovered that Tesco was more expensive than both Morrisons and Iceland, while Ocado was the pricest.

The results were determined by carefully tracking how each retailer priced 42 items outlined in the Government’s Consumer Price Index ‘shopping basket’ on a week-by-week basis – including eggs, milk, bread, and non-perishables like pasta and rice.

Asda was found to be offering the cheapest products during the four weeks of analysis overall (from October), with a basket costing £106.59, while Morrisons followed closely behind with a price of £111.75. 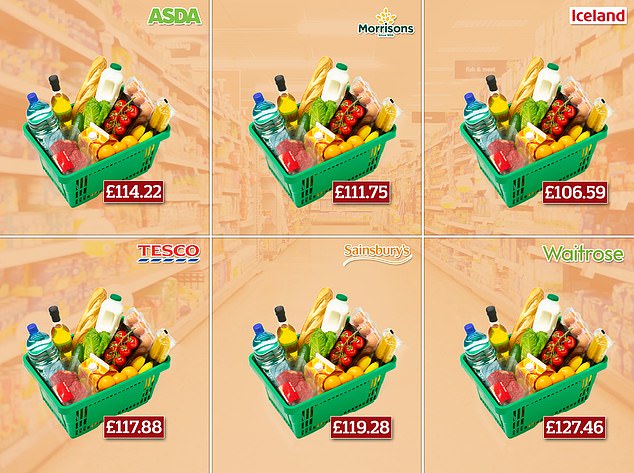 Asda is once again the least expensive option for British shoppers looking to keep grocery bills down this Christmas, according to new research

Sainsbury’s was next, with an average grocery bill of £119.28 for the products, while a basket from Waitrose reached £127.46.

The most expensive supermarket out of the seven UK stores studied was Ocado, with the items costing £130.14 on average.

The research found that more of the branded products fluctuate in price week after week, whereas more of the own-brand items stay the same.

Breakdown of average basket costs over four-week period in October:

The full breakdown of each supermarket’s average basket costs, from lowest to highest over the four-week period in October, were as follows:

For example, the own-brand breads stayed the same prices across all the stores for the whole four weeks.

Morrisons prosecco (I Heart Prosecco 75cl) was £7 for three weeks and went up in price in week four to £8.50, whilst Iceland wine (Campo Viejo Rioja Tempranillo Red Wine 75cl) was £8 in week one and went down to £6.50 in week two.

While prices across seven of the largest supermarkets were analysed, discount retailers Lidl and Aldi were not included due to the inability for customers to shop full ranges online.

Own-brand items (or their equivalent) were monitored in the research to give the most unbiased comparison of goods and their prices, with the exception of brands that all seven supermarkets stocked (e.g. Coca-Cola).

Also, in week one, Tesco’s large pack of six eggs was out of stock online, so all eggs were removed from tracking across the seven supermarkets for the week as there was no like-for-like replacement, then added back into week two once Tesco was restocked.

Andy Barr, co-founder of www.alertr.co.uk, said: ‘Despite us removing the leg of lamb from tracking due to a lack of consistency in weights across the supermarkets, which would naturally decrease this month’s baskets across stores, there definitely seems to be some pricing wars as we reach the final push to Christmas.

‘With everyone on the hunt for bargains to keep this year’s Christmas costs down, supermarkets have no choice but to lower their prices in order to compete.

‘As we come out of lockdown, it will be interesting to see if prices go down even further, or if we see them rise.’