Ariana Grande’s 2018 was, in a word, challenging. A ton of incredible things happened in her career as an artist, but her personal life certainly had its ups and downs. Most notably, she ended her longterm relationship with Mac Miller before starting a whirlwind romance with Saturday Night Live comedian Pete Davidson, and that ultimately ended with a broken engagement shortly after Mac Miller tragically died from a reported drug overdose. It was a lot, and now, fans are scratching their heads after Ariana Grande and Ricky Alvarez spent New Year’s together. But don’t go jumping to conclusions thinking Grande’s dating her ex again. Although the two were spotted together, it looks like it may have been more like two friends hanging out than anything romantic.

The 25-year-old singer was spotted walking with ex-boyfriend Ricky Alvarez in New York City on Tuesday, Jan. 1. Wearing a hooded puffy jacket, thigh-high boots (Classic Ari), and a black mask covering her nose and mouth, she’s pictured walking side by side with Alvarez, who is wearing a beanie and tinted glasses.

And while it might seem like Grande could be rekindling her romance with her former flame, I feel like it’s pretty unlikely — especially after her recent tweet about her relationship status that made things crystal clear that getting into a relationship in 2019 was not a priority for her.

According to Us Weekly, Grande’s tweet came as a response to tweets from fans that read, "Who Is Ariana Dating NOW?!" while another user responded, "spoiler. its [sic] me!"

Grande then responded to both Twitter users in the best way possible, writing, "Spoiler for the rest of this year / probably my life: it’s no one," adding, "Please refer back to this tweet for further questions."

And that, my friends, is exactly how it’s done.

Grande and Alvarez dated for about a year until summer 2016, when a source told E! News that the couple "just found it difficult to make it work." The rumor mill started churning once more, though, when Grande mentioned Alvarez on her breakup song, "Thank U, Next," and once more when Grande commented on one of Alvarez’s Instagram photos in December 2018. The picture showed Alvarez in a mustard yellow sweater, with the caption, "Ready for it," and Grande commented, "These colors are sick." While that in no way sounds flirtatious or romantic, fans on social media ran wild with speculation. Naturally, Grande cleared things up almost immediately, writing, "We’re friends everyone take a big ol breather."

Do you hear that, guys? Cool it with all the dating conspiracy theories! Ariana wants none of it.

Hear you loud and clear, girl.

Plus, if you remember correctly, Alvarez’s shoutout in Grande’s song "Thank U, Next" didn’t exactly show that she was dying to date him again. Alvarez’s line in Grande’s song was "Wrote some songs about Ricky / Now I listen and laugh." Eesh.

Fortunately, Alvarez knew it was all in good fun, and shared a screenshot of a note to Grande that read, "nothing but gratitude. thank u, next. (those songs are fire tho… you’re welcome.):" 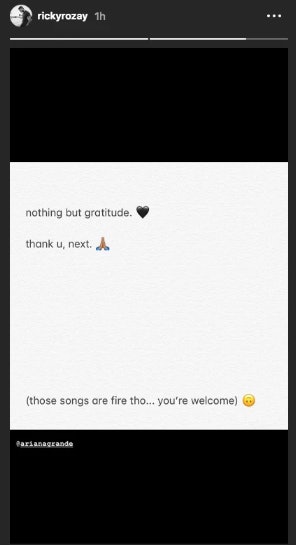 So if you’re looking for confirmation that Ariana Grande and Ricky Alvarez are dating, you’re probably not going to find it. This is the year of Ariana, so let’s allow her to focus on herself and her music. OK? OK.