While 2018 may be all said and done, Applebee’s is continuing to deliver with some amazingly cheap drink deals for 2019. The bar and grill is continuing its Neighborhood Drink of the Month promotion into the new year, which it offered each month for most of last year. If you’re looking to grab drinks with friends or coworkers, then Applebee’s $2 Captain and Cola for January 2019 is here for your next happy hour. Before you fire off a few texts to make after-work plans, here’s what you need to know about Applebee’s January Drink of the Month.

There’s no denying that Captain and Cola go together like peanut butter and jelly, for me anyway. So, it makes sense that Applebee’s would kick off 2019 with a classic pairing like this drink. Not to mention, this is also giving me some serious beach vibes. Applebee’s Captain and Cola drink is made with Captain Morgan Spice Rum and Pepsi and costs only $2 per drink, per a press release. The rum and cola libation is served up in a frosty, 10-ounce mug for the ultimate chilled beverage. Literally one of the worst things is when the ice in my drink starts to melt and waters it down. Personally, I think every bar should offer drinks in chilled mugs — but that’s just my opinion. 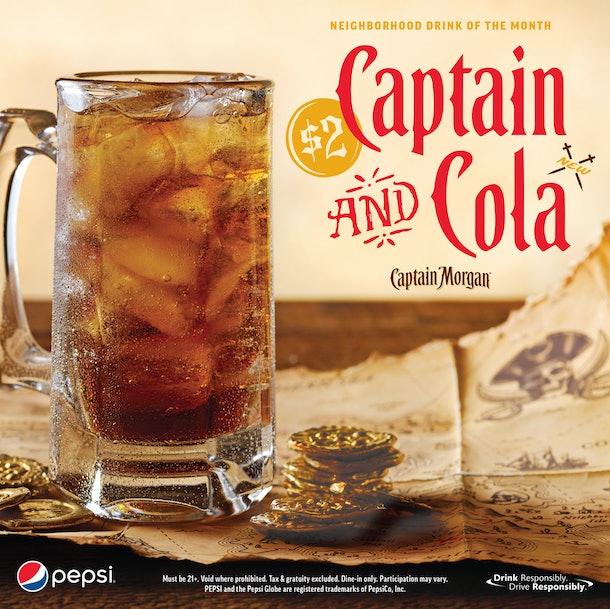 Of course, you will need to be 21 years and older to order a Captain and Cola from Applebee’s. The $2 Captain and Cola drink is available at participating locations while supplies last. Although, the restaurant notes that pricing may vary depending on which location you visit. To play it safe, give your local Applebee’s a ring before you go to make sure that you can order a $2 Captain and Cola.

“Rum and cola is a classic combination, but we wanted to make it special when we picked it for our next Neighborhood Drink of the Month, so we crafted it with our number one selling rum, Captain Morgan,” Patrick Kirk, vice president of beverage innovation at Applebee’s, said in a press release. “When you get your hands on a mug of Captain and Cola for only $2, it’s going to feel way better than returning those holiday gifts. You’re welcome.”

If you’re wondering why Applebee’s is not using Coca-Cola as the mixer, that’s because the restaurant only serves Pepsi products. It’s not a dealbreaker for me, but it is for some of my friends and family. I don’t drink much soda, but it seems that you’re either Team Pepsi or Team Coke. Either way, Applebee’s $2 Captain and Cola drink is easy on your wallet and a great way to kick back with your BFFs after a long week.

One last thing. Consider this your friendly reminder from me and Applebee’s to enjoy the $2 Captain and Cola drinks responsibly. Call an Uber or Lyft if you have to, but just make sure to play it safe. I’ll see you at Applebees this month. Cheers!