Liberal National Party backbencher Andrew Laming has withdrawn his apology to two women who alleged he trolled them online, saying the accusations against him were not genuine and his critics hadn’t made formal complaints to avoid scrutiny of their claims.

Dr Laming in March apologised on the Prime Minister’s instructions, just hours before a Nine News report on the two women’s allegations. The women claimed Mr Laming harassed them, including by writing online that one of them could not be trusted with other people’s money, leaving her stressed to the point of contemplating suicide.

Prime Minister Scott Morrison said at the time he found the alleged behaviour “disgraceful” and “called him into my office … and told him to apologise and deal with it, and he has”.

“He is very clear about my expectations.”

Dr Laming said in Parliament on March 25 that he had been told of the significant distress experienced by two “highly regarded” people in his electorate, Sheena Hewlett and Alix Russo, “as a result of my online commentary with them”.

“I express my regret and deep apologies for the hurt and distress that that communication may have caused,” Dr Laming said. “Today in this House I want to retract those comments and issue an unreserved public apology.” 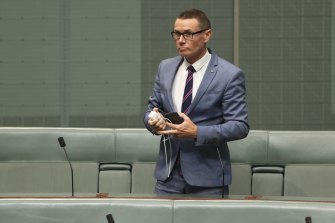 Coalition MP Andrew Laming hit out at his critics, accusing them of fabricating complaints.Credit:Alex Ellinghausen

But on Thursday, Dr Laming dialled into Parliament to say he had only apologised to those genuinely upset.

“Today I withdraw my March 25 Parliamentary apology,” Dr Laming said. “It is now clear that the accusations against me were fabricated.

“My apology was to anyone genuinely upset by my electorate communication. But none of those televised in March were genuine. My electorate work is always in the interests of the residents of Redland City and that local record remains online, unaltered and defended 100 per cent.”

He accused his critics of avoiding going through official channels to prevent proper scrutiny of their claims and said he only received one formal complaint, which was quickly thrown out. That complaint saw Queensland Police investigate allegations Dr Laming had taken an “inappropriate” photo of a woman’s bottom as she bent over at work, which was not the subject of the March 25 apology, and determine the evidence did not show any criminal offence had been committed.

Dr Laming has previously defended the image, saying the woman was in normal work clothes and the image was only to show her trying to fit an impossible number of drinks in an overstocked fridge. He has pursued, and received apologies, from several political and media figures over incorrect claims the photo was “upskirting”, which was wrong because the woman was wearing shorts.

Senior ABC journalist Louise Milligan was among those who described the image that way, which resulted in the national broadcaster settling a defamation claim brought by Dr Laming for a total cost of almost $200,000. He is also pursuing Nine, the owner of this masthead, for its initial news story on the photo. Nine is defending that defamation claim.

The ABC said Milligan had made the post “in good faith” and described it as an “honest error”. The broadcaster said particular and exceptional circumstances justified its decision to cover the cost of the claim, which managing director David Anderson clarified this week included potential liability for much higher damages.

Labor had seized on the allegations to demand Mr Laming leave Parliament, saying he was not fit to be an MP.

Dr Laming hit back at both on Thursday, branding Labor’s tactics targeting him in Parliament “disappointing political opportunism”.

“The ABC refusing to apologise for months and stooping to trawl my community for mildly annoyed critics to join the pile-on, in the form of a bizarre 7.30 report was disappointing,” Dr Laming said. “Speaker, I don’t believe there were any exceptional circumstances at play to justify the national broadcaster’s conduct, nor at any time ever an ‘honest mistake’ of the ABC, which they continue to maintain to this day.”

Dr Laming said in the wake of the allegations he would not stand for Parliament at the next election but later unsuccessfully attempted to retain his LNP endorsement.