Amanda Sequoyah Swimmer was born in North Carolina at a time when Native American children were forced to attend boarding schools, as part of a national effort to assimilate them into mainstream culture.

But as a child in fourth grade she grew tired of being punished for speaking her native Cherokee and forced to use English, and one day she jumped her school’s courtyard fence and ran away. She never returned.

Instead she fashioned a life devoted to the preservation of Cherokee culture, keeping its language and pottery traditions alive. She was revered in the mountainous tribal lands of western North Carolina — honored there as a “Beloved Woman” — and renowned as one of her people’s most skilled potters.

Mrs. Swimmer’s work has been shown at the Smithsonian in Washington, the North Carolina State Museum and at local museums across North Carolina, Georgia and Tennessee. It was also featured in the 2011 book “Cherokee Pottery: From the Hands of Our Elders,” by M. Anna Fariello. And Mrs. Swimmer herself was profiled in a 2000 documentary film, “Women of These Hills — Three Cultures of Appalachia.”

In 2005, as an octogenarian, she was awarded an honorary doctor of humane letters degree by the University of North Carolina, Asheville, for her work in preserving Cherokee heritage and her role in founding the Cherokee Potters’ Guild.

“I know how to subtract, I know how to read,” her granddaughter Melvena Swimmer quoted her as saying. “Common sense will get me the rest of the way.”

Mrs. Swimmer died on Nov. 24 at her home in the Big Cove community in the federal land trust known as the Qualla Boundary of the Eastern Band of the Cherokee. She was 97 and was one of the last surviving fluent speakers of Cherokee. Her parents, RunningWolfe Sequoyah and Molly (Davis) Sequoyah, had grown crops in Big Cove. 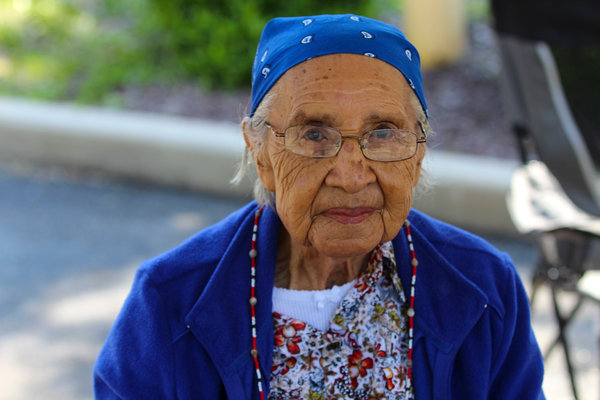 In addition to her granddaughter Melvena, she is survived by three daughters, Marilyn Swimmer, Marina Swimmer and Flora Bradley; two sons, Don and Virgil; 30 other grandchildren; and a number of great-grandchildren.

Though born in North Carolina, Mrs. Swimmer was not considered a citizen under law at the time; it was only after passage of the Indian Citizenship Act of 1924, when she was almost 3 years old, that she became one.

“Native American tribes were treated as foreign nations,” said Dave Beck, a professor of Native American history at the University of Montana; Native Americans themselves, he said, were considered citizens of those nations, not of the United States.

Mrs. Swimmer took up pottery as a child, after discovering a clay deposit close to her home. Her mother suggested that she try making something with it.

Soon, mother and daughter were selling pots to tourists and park rangers who would pass by their home. After she married Luke Swimmer, who taught her how to build a fire pit, her skills expanded.

One reason that her pottery stands out was her technique. After collecting the clay from the mountainsides of the Great Smoky chain, she would mold it by hand, without using a potter’s wheel. Then she would fire the pots over different types of wood, to achieve different colorings: A hard wood burned hotter, resulting in red; a soft wood would lend itself to darker colors. Last, she would add traditional designs, often geometrical shapes, pressed upon the pottery using a paddle board.

Mrs. Swimmer started selling her pottery at the Oconaluftee Indian Village, a tourist attraction in the town of Cherokee, in the 1950s. As her reputation grew, many people would stop by her home to purchase her wares.

“She was known for her pottery, but she was also known for caring,” said Richard French, a Big Cove Tribal Council representative. “She voted in every tribal election. She’d come to our monthly community meetings. People wanted to hear what she had to say. If she would support you, she’d tell you and if she didn’t she’d tell you why.”

It was Mr. French who nominated her this year for the title of “Beloved Woman,” an honor given by the Eastern Band of Cherokee Indians to highly respected elders. In his statement to the council, Mr. French said Mrs. Swimmer had “dedicated her life to the preservation of Cherokee culture and language by demonstrating and teaching countless children and adults.” The resolution passed unanimously.

In her last years Mrs. Swimmer spent much of her time teaching — both pottery-making and the Cherokee language. For 10 years she was a volunteer at the Cherokee Elementary School, where she taught children pottery and told them stories about their culture and history.

The Cherokee had long lived across vast swaths of the Southeast before thousands were forced off their land in the 1830s during the administration of President Andrew Jackson. The mass eviction culminated in the forced march west to what is now northeast Oklahoma, remembered as “the Trail of Tears” because of the thousands who died along the way. But many Cherokee remained, producing generations of descendants, Mrs. Swimmer among them.

“She had an impact on the whole tribal nation,” her eldest grandson, Eddie Swimmer, said. “Everybody called her grandmother.”

He recalled the time in 1998 when he and Mrs. Swimmer watched on television as Senator John Glenn made his second trip into space, as the oldest astronaut ever to fly, aboard the space shuttle Discovery.

“They said something about his age,” Mr. Swimmer said. “She looked over and said, ‘You know, I’m that age. I could go to space, too.’ She figured she could do whatever she wanted to do.”

Mr. French remembers another saying of hers: “There’s no word for goodbye in Cherokee. We’re always going to see each other again.”