An Indiana man charged with supplying the semiautomatic handgun used to shoot two Chicago police officers – one fatally – has been released from jail on bond, prompting outrage from the city’s top cop. But the suspect told CBS Chicago he was “devastated” when he heard about the shooting and that he’s “a good person.”

Separately, the mother of two brothers charged in the shooting was taken into custody after allegedly causing a disturbance at the hospital where one of her sons is being treated, CBS Chicago said.

In setting bond, Gilbert cited the facts that Danzy has no prior criminal record and that he has a job as a Head Start teacher’s aide in Merrillville, Indiana, CBS Chicago reports.

Officer Ella French, 29, was killed and a 39-year-old unnamed officer was critically wounded Saturday during a struggle after they stopped an SUV because of expired plates. French, 29, was shot once in the head.

Sources told CBS Chicago a passenger shot both officers from the back seat of the car that had been pulled over. Officers returned fire, striking the passenger who appeared to fire at them, Brown said. He didn’t release the condition of that man.

Danzy wasn’t in the vehicle and was arrested later. As part of his bond, Danzy also was ordered to be under court supervision.

” … by allowing Mr. Danzy to walk free, the court has done a disservice to Officer French’s memory, to the entire Chicago Police Department, and to the thousands of men and women across the country who work around the clock, day in and day out to stem the violence that is plaguing our communities,” Brown said in a release.

“This decision sets a dangerous precedent that straw purchasers like Danzy are not a danger to society, despite the fact that his alleged actions directly led to the murder of a Chicago police officer and left another in critical condition,” Brown also said.

Danzy, 29, is accused  of buying the weapon from a licensed gun dealer in Hammond, Indiana, in March and providing it to an Illinois resident who he knew could neither buy nor possess guns because of a felony conviction. He was arrested Sunday and charged with conspiracy to violate federal firearm laws.

Danzy speaks on his own behalf

CBS Chicago says the complaint against Danzy included a photo of the weapon, a Glock Model 44, that investigators said was purchased and then used in the fatal shooting. Danzy also owned the car that was pulled over by French and her two partners, prosecutors said.

During questioning at a restaurant in Munster, Indiana, where Danzy works, Danzy said he has been in a relationship with suspect Eric Morgan for three years and sometimes let Morgan drive the vehicle, according to CBS Chicago.

The station says Danzy also dances online – and some of the videos he posts are in a classroom setting.

“I’m a good person, educated, went to school got two degrees – a bachelor’s and master’s – love kids, work with kids, love my nephew. I work hard every single day. I stay out of trouble,” he continued.

When asked how he felt about the fact that the gun he’s accused of buying was, police said, used in the shooting, Danzy replied, “I don’t even want to discuss it. I just feel truly bad about the situation and that’s it.”

He added that when he heard about the shooting that killed Officer French, he was “devastated.”

Danzy’s brother, Roderic Hopkins, defended Danzy, telling CBS Chicago, “My brother is not a criminal. He’s a very educated person,” Hopkins said. “My brother goes to work every day. He loves kids. He loves his family; loves his friends. He wouldn’t hurt nobody.” 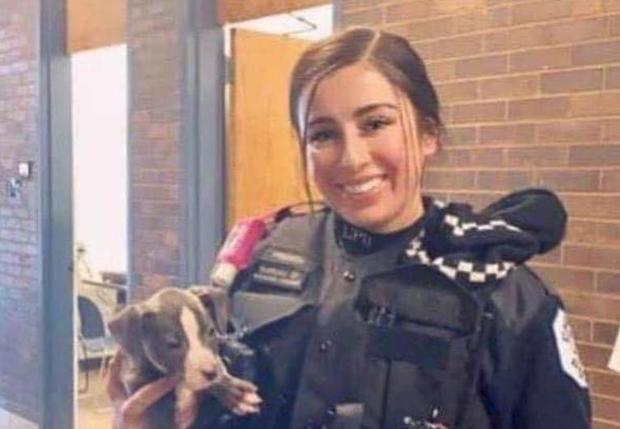 Meanwhile police were called Tuesday night after the mother of the brothers accused in the shooting became angry when she wasn’t allowed to see her son, who was in an Oak Lawn, Illinois hospital. CBS Chicago says video posted on social media shows 41-year-old Evalena Flores on the hospital floor yelling for her son before she was handcuffed by police.

Oak Lawn police said Flores will be charged with misdemeanor offenses including battery, resisting a peace officer, and criminal trespass to real property.