ALEX BRUMMER: His muddled and flaccid responses to the growing financial crisis have seen the Bank of England Governor’s authority drain away

This week, the Government’s enemies have been determined to blame the volatile pound on Liz Truss and her Chancellor Kwasi Kwarteng — and their bold experiment to re-establish Britain as a low-tax entrepreneurial nation.

These critics appear unaware that it’s the Bank of England, with Andrew Bailey at the helm, that is entrusted with three things: maintaining price stability, preventing disorderly markets and ensuring that City traders do not get out of line.

And on all these fronts, Mr Bailey has failed miserably.

Since he took over from the slick Canadian Mark Carney in March 2020, the Bank’s Governor has presided over nothing less than runaway inflation. He seems not to have grasped the disastrous consequences of a falling pound — and he has shown little inclination to use the authority of his office to calm over-exuberant trading.

It used to be said that, faced with frothy markets, the Governor of the Bank of England could ‘exert discipline with a raised eyebrow’. Bailey’s eyebrows could be beetling like mad and traders and speculators would barely notice.

Throughout his ill-fated two-year tenure, his credibility has been repeatedly tested by the various blundering signals he has made to the markets and his dispiriting failure to listen to siren voices around him. 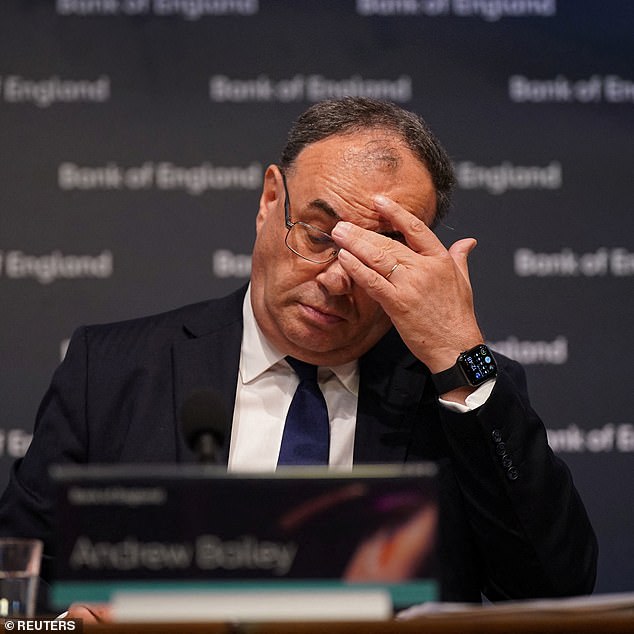 Throughout his ill-fated two-year tenure, Andrew Bailey’s credibility has been repeatedly tested by the various blundering signals he has made to the markets

Bailey, 63, tries to attribute Britain’s rampant inflation to Russia’s war on Ukraine and its impact on global energy markets. But the fact is that prices were soaring by 6 per cent even before Vladimir Putin began his mad offensive, and are currently climbing by 9.9 per cent year-on-year.

This is higher than many of our international peers and five times the Bank’s mandated rate of 2 per cent.

Inflation would in fact be heading even higher — banking giant Goldman Sachs was recently projecting more than 20 per cent — had not Ms Truss taken decisive action to limit domestic energy prices within hours of taking office.

That alone knocked about 5 per cent off the prospective cost of living. Not something Labour has found time to mention in its self-congratulatory conference this week.

Bailey was warned about the coming ravages of inflation as far back as May 2021. Writing in this newspaper, the Bank’s then-chief economist Andy Haldane put it bluntly: ‘The inflation genie is out of the bottle.’

This open split with the Governor, who lacks the economic credentials of his immediate predecessors Mervyn King and Mark Carney, eventually saw a frustrated Haldane head for the exit, becoming chief executive at the Royal Society of Arts.

Several City grandees felt it was the fiercely intellectual Haldane, with strong views on how to deal with Britain’s regional economic inequalities, who should have been Governor in the first place.

After all, Bailey’s tenure at the accident-prone Financial Conduct Authority was equally inauspicious; a job he took on in 2016 at the behest of then-Chancellor George Osborne.

It was on Bailey’s watch at the FCA that two devastating scandals unfolded: the £268 million London Capital & Finance fund went into administration, and Neil Woodford’s £3 billion investment empire imploded in 2019.

Bailey was subsequently criticised for his handling of the first scandal, receiving a rap across the knuckles from ex-High Court judge Dame Elizabeth Gloster after he sought to have his name expunged from her excoriating official report.

Despite these dispiriting episodes, Bailey’s name was on the shortlist for Bank Governor when Chancellor Sajid Javid — in that post for only six months — picked the next incumbent two years ago.

Bailey’s tenure at the Bank began in March 2020, just as the pandemic descended.

He acted decisively (I suspect the plans had already been put in place by Carney) to slash interest rates and pour money into the economy to prevent businesses going to the wall.

It was his finest hour, but it has been downhill ever since.

As inflation soared in the autumn of 2021, fuelled by supply bottlenecks from Covid-19, the Governor repeatedly insisted that the cost of living surge was ‘transitory’.

It was nothing of the sort and it has become even more entrenched since then.

As prices started to soar, the Governor belatedly acknowledged that inflation might be a problem and made several comments alerting financial markets to the idea that after years of historic low rates, it was finally time to act.

But having, like the Grand Old Duke of York, marched the City traders and banks to the top of the hill, he marched them down again. 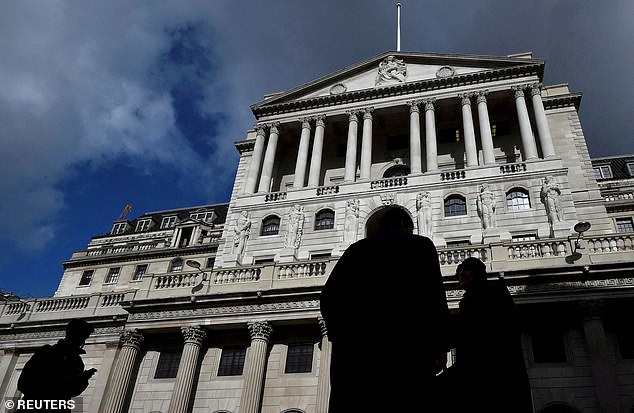 Even Bailey’s new chief economist is cautioning that a ‘significant’ rise in interest rates is necessary. But it seems the Bank will not plan to act before its next scheduled meeting in November

After saying in October that the Bank would have to act to contain inflation expectations — its own forecasts then predicting inflation to grow to reach 5 per cent by early 2022 — Bailey wrongfooted investors by bottling a November rate rise.

By December he was left with no choice, but he could only muster a nervy 0.15 of a percentage point, bringing the total rate to 0.25 per cent.

The same innate timidity and tendency to miss opportunities were on full display at the Bank’s meeting last week.

Only a few days before, Sweden’s Riksbank had hiked the country’s rates by a full percentage point. The Bank of Canada put rates up by a full point as early as July, and in September added a further 0.75 percentage-point increase.

In the U.S., meanwhile, the all-powerful Federal Reserve had recently raised rates by three-quarters of a point for the third month in a row, its chairman Jerome Powell stating clearly that there was more punishment to come in the battle against inflation.

Why on earth didn’t Bailey take heed of these dire warnings?

He had domestic clues, too: the Prime Minister had only just loosened the budgetary strings with her generous energy packages for households and businesses — and the new Chancellor, Kwasi Kwarteng, was known to be planning tax cuts.

All these measures should have precipitated a robust response from the Bank.

Instead, Bailey confounded international expectations by raising the rate by only half a percentage point last week, instead of the widely expected 0.75 percentage points.

The pound was already in freefall against the dollar, and no fewer than three members of the Bank’s rate-setting Monetary Policy Committee wanted it to go harder — but that wasn’t enough for Bailey.

He had the opportunity to show leadership and, in the words of former deputy governor Charlie Bean, ‘go big and fast’ — but he blew it.

Even his new chief economist Huw Pill is now cautioning that a ‘significant’ rise is necessary. But it seems the Bank will not plan to act before its next scheduled meeting in November.

Firing the ‘independent’ Governor of the Bank of England is more or less politically impossible for Mr Kwarteng and would scare the markets to death.

Bailey is anxious not to be made the scapegoat for Britain’s economic ills. However, his flaccid and muddled responses to events have seen his authority drain away.

Given that he has six years remaining in his eight-year post, he needs to act far more decisively — or we’ll all be paying for his mistakes.