If Anthony Albanese wanted a safe space from which to reset his increasingly tetchy relationship with the travelling press pack he could not have a safer space than among the volunteers at the Addison Road Community Centre in the heart of his own seat of Grayndler in Sydney’s inner western suburbs.

There, competing with low-flying aircraft and screeching cockatoos before a small handful of sympathetic onlookers, Albanese pushed back at the sort of questions that have marked his campaign since he was unable to name key economic figures on day one. 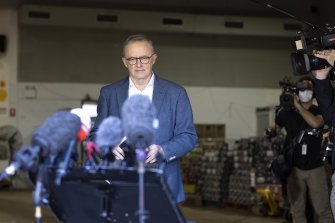 Opposition Leader Anthony Albanese took on the media during a press conference in Marrickville.Credit:Alex Ellinghausen

Albanese had clearly had enough.

A day earlier, the Albanese campaign had been surprised by the tone and aggression of questions he faced at a press conference at a Smart Energy Conference in Darling Harbour. So were some onlookers and TV viewers.

He and his energy and climate change spokesman Chris Bowen had spent some time performatively inspecting solar technology and electric vehicles and talking up Labor’s climate policy before the presser began.

But when questioning began Albanese was hit with a volley of demands that he list the six points of the disability insurance policy he’d announced on April 19. It was a task he was unwilling, or unable, to perform.

Albanese then faced a handful of pertinent questions from the pack – and a curveball from a toddler who’d wandered up to the lectern – before he was again asked if he had failed to remember his six points.

Even before the journalist finished his question one of the bystanders interrupted. “You’re kidding, what sort of question is that? Move on to something more important.”

Then the exchange got testy. “Let me tell you what the NDIS is about,” said Albanese, his voice raised. “It is not about gotcha questions.”

“Woohoo!” chimed in the onlooker as the journalist sought to restate his question. 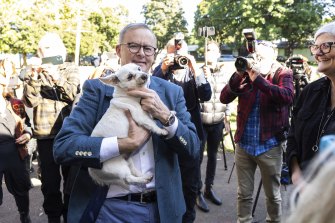 Opposition Leader Anthony Albanese with a dog that joined his press conference at the Addison Road Community Centre.Credit:Alex Ellinghausen

“You had your opportunity and now it is my turn to answer, so just wait,” said Albanese, before illustrating his answer by describing his childhood being cared for by a disabled mother in nearby public housing.

Asked by another reporter if his colleagues had told him to get across his brief, Albanese again let his frustration show. “We have real issues in this country,” he said at one point, before dismissing another question about how he would, “stand up to Xi Jinping if you can’t stand up to us”.

When asked again if he would guarantee not to cut funding to a range of social welfare programs should he be elected Albanese again pushed back hard, saying that Labor had committed to increasing funding in those areas.

“This is the sort of thing that puts people off politics,” he said. “That sort of word game. My answer is very clear. It couldn’t be clearer.”

Another reporter tried again moments later. “Mr Albanese there have been moments in this press conference where you have clearly got agitated,” she began, adding that in the absence of funding announcements by Albanese the focus was becoming, “about you and your blunders”.

With a remarkable lack of agitation, Albanese observed that the previous evening he made a 30-minute speech on economics at the Australian Chamber of Commerce and Industry to 150 business leaders, and that he had yet to receive a single question about it.

With that, he wound up to scattered applause from those standing beyond the ring of reporters.

Susan Conyers, who lives locally, said: “I stopped listening after a while because I just found the journalists very aggressive. People were asking questions about things that happened in the first week of the campaign. Move on.”

“The minute it comes on the TV I turn it off. I am sick of the aggro.”

Another was Dina Petrakis, who serves on the board of the community centre. She, too, was unimpressed.

“Some journalists are trying to get some real information but some are just holding a mirror up so they can see themselves,” she said. “There are journalists, and there are Kardashian journalists.”