The aged care sector needs almost 60,000 workers to plug the national staffing gap, with providers calling for prioritised childcare for workers and migration incentives, such as help with school and housing placements, to draw people back into the haemorrhaging workforce.

Catholic Health Australia (CHA), the country’s largest aged care body, compiled the sector-wide figures with the University of Notre Dame and a consultancy, Evaluate, to illustrate to whoever forms government after May 21 the enormity of the shortages that risk the collapse of facilities across the country. 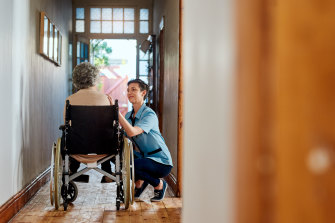 There are almost 60,000 staff vacancies in aged care across Australia.Credit:Getty

“Our hospitals and aged care providers just cannot go on with this acute understaffing. The situation right now is totally unsustainable,” CHA chief executive Pat Garcia said. “If these numbers don’t shock the new federal health minister, I don’t know what will.”

The study found a total of 82,156 vacancies in hospitals and aged care and Garcia said the “startling figures” could be even higher because the study’s researchers applied their modelling conservatively.

Staffing the crisis-plagued sector – which saw the army intervene as deadly COVID-19 outbreaks gripped homes at the beginning of the year – has been a focus of the election campaign. Labor has promised to back a workforce wage boost, and both political camps have cited the need to import staff.

The Fair Work Commission is hearing a case to raise the workers’ pay by 25 per cent, and the CHA report says the boost was necessary to attract a sustainable future workforce.

UnitingCare, the only provider network to explicitly back the 25 per cent hike, has costed it at $4 billion a year. Labor’s treasury spokesman Jim Chalmers said on Thursday it wasn’t yet possible to cost the outcome of the case, “which is why the government hasn’t costed that either”.

“Scott Morrison has said that a federal government would have to fund a future outcome of an aged care wage case. We have said that we support the case and we think that aged care workers are quite substantially underpaid,” Chalmers told press in Canberra.

The report said the demand gap had been exacerbated by pandemic immigration restrictions and CHA called for a range of incentives to address the shortfall, including prioritising relevant workers on childcare waiting lists, higher subsidies, and direct funding for in-house childcare centres.

CHA is also suggesting removing visa costs and associated red tape, assistance with organising housing and school placements, and pathways to residency to induce workers to come to Australia. The body has previously called for a moratorium on prioritising local recruitment before looking overseas.

“We need to expedite the process for healthcare workers to get into Australia and get them to work,” Garcia said.

“In a competitive global market we also need to think about incentives … anything to make their lives easier and lessen the burden of moving here.”

“We also need the government to ensure and make affordable flexible, out of hours childcare options for healthcare workers. We have put a range of suggested childcare reforms on the table for the government, but what is clear is that reform is now urgent.

A Labor spokesperson said the party, which has pledged an additional $2.5 billion for the sector, would lure workers back by improving working conditions, and train the next generation of workers through free TAFE places and more university places.

“Many workers have left the sector due to low pay and terrible working conditions – both of which have gotten worse under this prime minister,” the spokesperson said. Labor is pledging qualified nurses in aged care homes 24 hours a day.

A spokesperson for Aged Care Minister Richard Colbeck said the Coalition had committed $19.1 billion to improving the sector, including $901 million to better train, retain and increase the aged care workforce.

Colbeck last week said a re-elected Coalition would move “very quickly” to recruit from overseas, while Labor leader Anthony Albanese has also acknowledged there would need to be a “stopgap measure”.

“With efficient and cost-effective visa settings we can attract and retain talent, which will be crucial to strengthening our economic recovery in the years ahead,” he said.