Miniskirts, hotpants, a kaleidoscope of colour and androgyny are some of the hallmarks of Mary Quant's extraordinary fashion. In the 1960s, the British designer helped free women from uncomfortable, old-fashioned clothes and revolutionised the fashion industry in the process.

A celebration of her work is coming to Bendigo Art Gallery in March, from London's Victoria & Albert Museum. Mary Quant – Fashion Revolutionary was the V&A's most popular fashion gallery exhibition ever, selling out most days. 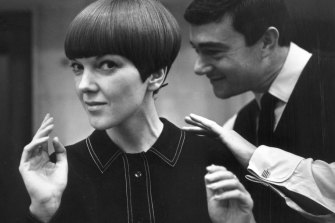 Mary Quant, one of the leading lights of the British fashion scene in the 1960s, having her hair cut by another fashion icon, hairdresser Vidal Sassoon. Credit:Ronald Dumont

Born in 1930, Quant took what was acceptable for women to wear and turned it on its head. She created pants for general wear at a time when they were still only deemed acceptable at home. By using stretchy fabrics such as nylon and latex in underwear and jersey fabric in dresses, she allowed women to move freely. She streamlined traditional masculine tropes like suits and ties, for women.

Of course, she also raised hemlines. Though she didn't invent the miniskirt, Quant made them an art form.

As well as showcasing these radical-at-the-time designs, the show illustrates fashion as a way of pushing boundaries and changing the status quo. If fashion is about power, Quant's helped empower women. 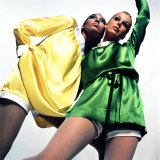 In the 1960s, Quant took what was acceptable for women to wear and turned it on its head.

Stephanie Wood, the show's curator at the V&A, says Quant is one of Britain's most loved designers. In preparing Mary Quant – Fashion Revolutionary, the V&A did a callout – 'We want Quant' – asking the public for photos and any surviving garments. Wood says over 1000 people got in touch. "It completely transformed the show and managed to fill all the gaps in the narrative. That is a really lovely part of the story. Telling this story of fashion history and what that meant for the women.

"It really foregrounds the story of the women who wore the garments."

In 1955, the self-taught designer opened her boutique, Bazaar, in Chelsea's King's Road. Against the backdrop of post-war Britain, her early designs were outlandishly coloured and outrageously different. "That's something we've tried to mirror – even if you're not interested in fashion, there's a sense of fun and dynamism," says Wood.

Playfulness came through in the shopping experience, too. In stark contrast to the rest of the western world, Wood says Bazaar was more like a club. "They would serve drinks, have late-night openings, played jazz music, constantly changing stock, they also had fashion shows there," she says. 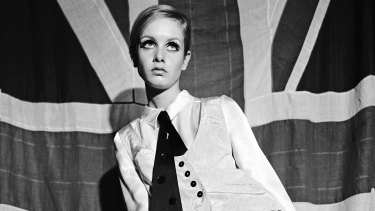 Even before the miniskirt became fashionable, Quant was pushing the boundaries of what was acceptable for women. Not that she had any qualms about it. "It was difficult to understand why [people] were shocked," she wrote in her 1966 autobiography Quant on Quant. "The mini was a way for young people to assert themselves. Youth was changing forever. It hadn't had a voice until that point. The clothes and fashion freed them from the claustrophobic clothes from before. I think the miniskirt was the impetus for it all – and jazz. The two together were a combination and a catalyst."

Young and vibrant, Quant was the ideal spokesperson for her company; she wore her own garments and became the face of the brand. For many, she came to represent its ethos and spirit: fun, playful and thoroughly modern.

As the female head of an international business, she was a significant role model for young women. Her cosmetics range was hugely successful and helped her become an international name. By 1974, it was stocked in 100 countries around the world. She worked with cosmetics manufacturers to create new colours, as she did with textiles manufacturers for materials in her designs.

Quant's designs were some of the first to be mass produced. "For her it was very much about bringing fashion to the masses," Wood says. Having started adapting Butterick [sewing] patterns to her designs, she later created a range for them. 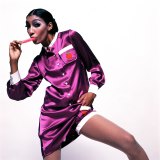 Quants designs were among the first to be mass produced.

A section of the Mary Quant – Fashion Revolutionary show is devoted to socks, tights and stockings. In the 1960s, stockings were the go-to for most women but because Quant was increasingly raising hemlines, designing tights made sense – both to preserve modesty and allow women to move freely. Booby Traps, the Quant underwear line named by her husband and business partner Alexander Plunket Greene, reflects the fun the couple had with their work.

Originally from Wales, both her parents were teachers and keen for her to follow in their footsteps. The compromise was she would go to art school. "Art school was a hotbed of people coming together. Her being very creative and mixing with all these people who had very different perspectives, lots of bohemians and free thinkers," Wood says. "Her working class roots made her driven, she had to work for everything she did."

Quant met Plunket Greene there and they formed a formidable team. "He was from an aristocratic background and knew a lot of media and contacts, so could open doors, while she had the vision," says Wood.

Wood says part of the designer's appeal is that her work stands the test of time. "With so many different designers and fashion periods, hers is a credit to her foresight and vision that she has created these timeless designs that are still wearable."