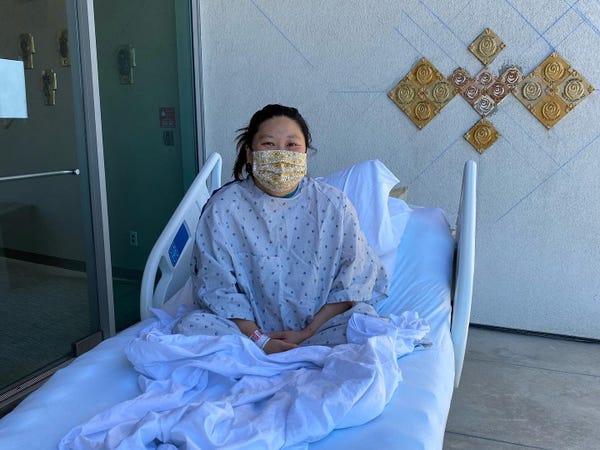 On August 17, Janet Udomratsak virtually greeted her class of 18 third graders for the first time. When the students looked at their computer screens, they spotted a smiling Udomratsak in front of a colorful "welcome" garland, calendar, and dry-erase board.

What they didn't know was that Udomratsak was teaching from a hospital room. Next to Udomratsak's makeshift classroom is a hospital bed and IV stand. Her food tray functions as a temporary desk and her wrist is stacked with hospital bracelets.

The pregnant mother has been in the hospital for just over eight weeks due to a condition that puts her at risk of premature labor. However, that wasn't going to stop Udomratsak from teaching this school year.

"I'm sitting in front of a computer, regardless of it it was at home or if it was here," the 35-year-old told Insider. "It's still going to be the same."

If these last few months of being in a hospital have taught her anything, it's that nothing is set in stone.

While Udomratsak started the school year teaching third graders at Tierra Bonita Elementary in Lancaster, California, she was recently moved to a new school and a new grade level.

For one week, she taught a first-grade class at Enterprise Elementary in the same school district. Friday is Udomratsak's last day of teaching, as she is expected to deliver her son, James, next week.

After the in-person school year was cut short, Udomratsak quickly realized that the virus was going to affect the upcoming academic year.

While school leaders spent the summer debating whether to offer online or in-person classes, Udomratsak started preparing for what she anticipated to be a virtual fall.

The district's final decision to go virtual worked in Udomratsak's favor. She was placed on bed rest on July 4, but virtual school meant that she could keep teaching from her hospital room.

Udomratsak emphasized that she wasn't forced to teach — she wanted to. "I was fighting to stay at work," she said. Her doctors gave her the green light to teach, and she worked with the school district to get the final approval.

Udomratsak said her students never realized that she was in the hospital. With the help of her husband, Udomratsak built a backdrop to teach in front of.

Udomratsak is staying positive thanks to her family and students

Udomratsak spends her mornings teaching. Once the clock hits 3 p.m., she rests. In the evening, she'll Zoom with her husband, Chris, and 5-year-old son, Henry.

At Providence Holy Cross Medical Center, where Udomratsak is on bed rest, visitations are restricted. However, a couple of weeks ago, nurses and staff surprised Udomratsak with a visit from Chris and Henry, which was the first time she had seen them in person in six weeks.

"I was just in tears," she said. "It was really surreal to have had that opportunity after so long."

Beyond her family, Udomratsak's students have helped her stay positive. She said she kept teaching because "it was really just my take on showing everyone that [teachers] are really dedicated to what we're doing. And that my passion is really for my students."

That passion was apparent to students and parents even after two weeks of teaching. Udomratsak said she receives nonstop emails from her third-grade students, who say they miss her already, and Udomratsak said she's heard through the grapevine that the families miss her, too.

The decision for Udomratsak to switch classes was out of her control, but she said the students were left in good hands and it's nice to know that she's missed.

"When you hear things like that, that's what makes you go, 'Hey, I did what I was supposed to do,'" she said.

After delivering James next week, Udomratsak will finally head home to reunite with Henry and Chris. James will stay in the neonatal intensive care unit at the hospital until he's strong enough to go home.

"The first thing I'm going to do is take it all in and stay with my son," she said, referring to Henry. "I will be catching up with him and spending those last few days with him before the baby does come home. Just soaking it all in."

As long as everything goes as planned, Udomratsak said she could be back in front of students as early as November of this year.

If you're a teacher, student, or parent who wants to share their story on what it's like to go back to school right now, get in touch at [email protected].