For five months an enormous model of a gory, flayed cow's head has sat in Ivan Durrant's hallway.

Now at last it's in place at the NGV Australia, tucked in a dark cupboard-like space for maximum impact, ready for the Victorian artist's grand retrospective show. 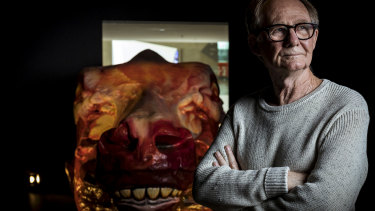 Artist Ivan Durrant with his sculpture of a skinned cow’s head at the National Gallery of Victoria Australia.Credit:Chris Hopkins

The artist formerly known as Ivan the Terrible, after some controversial performance art in the 1970s which the NGV at the time described as "sick and disgusting", is far from terrifying in person.

Instead he genially gazes up at the walls at his many pictures of horses and cows (skin on), recalling the "joy of milking" as a boy, and marvelling at the sight of his life's work.

"I never imagined it would look as good as this," he says. He's not being immodest, he's actually surprised at the sight of it, impressed with the talent of the curators who drew out patterns and themes, and played with placement.

He moves on to huge, hyper-real and glamorous actors' portraits, paintings of the sights and sounds from the racetrack, an enormous grid showing details from his studio: glowing brushes and paint tubes that litter his workplace.

There's an evocative series showing the slatted darkness of an old wooden sheep shed, which takes him back to a troubled time as a kid in an orphanage, and the places he would go to escape.

And everywhere there's a fascination with the play of light, with the flash, contrast and focus of photography replicated in paint.

"It's always been about colour and light for me," he says. "About how far you can take it from reality while maintaining the truth in what I'm showing you."