It was my brother who first mentioned it. The night of my partner Chumpy’s death, I was sitting in my backyard, on the edge of the deck with my head between my knees, when Dave sat next to me and started talking. I only heard two words: “sperm retrieval”. 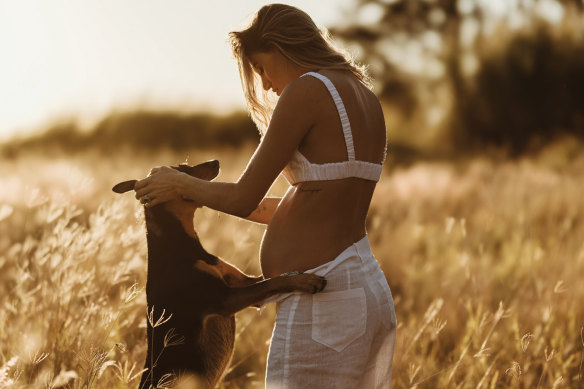 Just days after her partner’s sudden death, Ellidy Pullin made the decision to retrieve his sperm.Credit:Hannah Sugarman

My girlfriends Chloe and Laura had suggested it. At first, Chloe thought it was “weird” and shut it down, but Laura pushed for her to speak to Dave. A friend had lost her partner when she was 30. That friend was pregnant at the time, and she’d told Laura how much she wished she’d been able to retrieve her partner’s sperm so she could give her son a sibling.

Those words ran through Laura’s mind. “This could save Ellidy’s future,” she thought.

No one knew if they should bring it up with me, let alone how. My brother probably agonised over how he’d tackle the subject, but he only had to say the words “sperm retrieval” for me to know it was something I wanted to do.

I’d never heard of post-mortem sperm retrieval and had no idea of the process or legalities, but I just knew. “Yes,” I said to Dave without any hesitation. “Do it. That’s what I want. Can you make it happen? Please.”

Even though I didn’t know what was involved, I had a feeling it was a time-sensitive situation. I wanted my brother to stop talking about it and do what needed to be done to make it happen.

I learnt later that sperm can survive within the body for several days, but under current Queensland guidelines, sperm retrieval needs to happen within 36 hours. First, we had to hire a fertility doctor from an IVF clinic to actually do the procedure and a lawyer to help with the legalities, so my brother and my friends started making calls.

Because Chumpy and I weren’t married, his parents, Chris and Sally, needed to sign an affidavit to give their support for the procedure. They were totally supportive. We all agreed that we would do whatever we could to make the sperm retrieval happen, then make any decisions once the thick blanket of shock had lifted and we’d had time to think.

Time was ticking. The first IVF clinics Chloe and Mum contacted didn’t perform sperm retrieval or weren’t equipped to do it. I can’t imagine what those conversations would have been like. “Um, yeah, hi. My friend’s boyfriend has just died. Can you retrieve his sperm for her?”

I can’t imagine what those conversations would have been like. “Um, yeah, hi. My friend’s boyfriend has just died. Can you retrieve his sperm for her?”

Finally, we reached Dr Andrew Davidson at a clinic in nearby Robina. He was very black-and-white about what had to happen. The process of getting the sperm was relatively simple – it involved making a cut and taking out sperm cells – but the red tape was less straightforward. We needed to get the green light from the coroner before Dr Davidson could do anything. I have no idea how many forms I signed during those precious hours.

It came down to the wire. We had 36 hours … and the procedure happened in the 37th. Dr Davidson went to the morgue and performed the retrieval at 9pm. If he’d been an hour later, or left it until the morning, it would have been too late. I felt like I was in the safest of hands – and so was Chumpy.

Somehow, against all odds, everything aligned that day. Had Chumpy died on a weekend, when the courts and IVF clinics were closed, we wouldn’t have been able to do it. I like to think Chumpy was helping us.

Once the sperm had been retrieved, it was taken back to the doctor’s lab and examined for any live specimens. Only 1 per cent of the sperm was showing some sign of life, but that’s all we needed: all it takes is a single sperm. The swimmers didn’t need to be star athletes or perfect specimens, they just had to be alive. The only thing that mattered was that the sperm was viable and there was some hope in the shit-show that had become my life.

The sample was stored at the IVF clinic, and I put the thought of it on a shelf above my grief. It was always in the back of my head, but I didn’t have the space to really think about it in those early days. I was in survival mode, doing what needed to be done to just get through the day. Later, Dr Davidson’s nurse, who’s also his wife, told me she held Chumpy’s hand and spoke to him during the procedure, telling him what they were doing and why.

“Oh shit,” I said, trying to imagine what that moment would have been like. “So, like, he was just lying there, and you were holding his hand?”

“Yes, I talked him through the whole thing,” she said.

It was such a beautiful thing for her to do, and I felt so lucky to have her and her husband looking after me and Chumpy. I knew it wasn’t luck, though – it was meant to be. Dr Davidson was meant to do the procedure and be my IVF doctor. In their care, I felt as though I was where I was meant to be. It was also nice for me to know that Chumpy wasn’t alone in that moment.

I was – and still am – eternally grateful to my brother, my mum and my friends for making the sperm retrieval happen, and to Chris and Sally for supporting it. It’s not lost on me that the person responsible for Chumpy and me meeting, surfer Laura Enever – we met at her 21st birthday party – is also responsible for our baby.

It’s also not lost on me how many women went before me to make sperm retrieval a reality. The first time a baby was born using post-mortem sperm was in 1999. Since then, the cases have been few and far between, but statistics from select sperm banks show they have increased in recent times.

It’s also not lost on me how many women went before me to make sperm retrieval a reality. The first time a baby was born using post-mortem sperm was in 1999.

In 2017, a Queensland woman called Ayla Cresswell had to go to the state’s supreme court to get permission to use the sperm of her late boyfriend, Joshua Davies, who had died very suddenly the year before.

Ayla had the support of Joshua’s family, evidence that he wanted to have children and affidavits from his friends saying the same. His sperm had been harvested within 48 hours of his death and stored at an IVF clinic, but Ayla needed the court’s approval to use it.

Almost a year after she launched her legal case, the judge granted her permission to use the sperm to attempt to have a baby.

“There is clear evidence that Joshua Davies expressed a desire to have children,” said Justice Brown in her ruling. “I am satisfied that Ms Cresswell’s decision is not an irrational response to grief … [and] any child which may be conceived as a result of the use of Joshua Davies’ sperm will be loved, cared for and able to be financially and emotionally supported, not only by Ms Cresswell but by the extended family.”

Ayla’s case set a precedent. Because of her, I was able to do what I did.

Of course, not everyone agrees with posthumous reproduction. There are people who have moral, ethical or religious issues with using a dead person’s sperm to have a child. Some people have been very vocal on Facebook about it, but I try not to read the comments.

I like to think if people knew our story, knew how much Chumpy had wanted to have a child and knew how long we’d been trying, they would understand my decision.

The idea of having a baby on my own, a constant reminder of what I’d lost, was hard enough without having to deal with other people’s judgment. Until someone has been in my shoes, I don’t think they’d ever be able to understand what I went through.

I know Chumpy would be cut up that his child doesn’t have him in her life, but he would just love that a piece of him is still here, carrying on his name and his legacy.

I know that because I know Chumpy. In the midst of the turmoil of Chumpy’s death in July 2020, I wrote a love letter to our baby, who didn’t exist yet.

Dear baby Pullin,
I love you so much and you aren’t even here yet. Your dad is a warrior. He is absolutely beyond this world. He will be teaching you and guiding you. I may be the portal through which you learn from him. Maybe he will have direct access to you, though. You are wonderful and we are going on a journey. We need each other. Chump is taking us for a ride! An adventure. Truly magical. This was a part of his soul contract. You and me, baby. We live for him, through him and with him.
Love, Mum xx