All I wanted for Christmas was abs! Woman drops THREE stone and achieves a ripped stomach in just EIGHT weeks after swapping festive overindulgence for an exercise plan

Most of us spend the last few months of the year relaxing, celebrating and binge -eating our way into Christmas – and normally piling on the pounds as a result.

But Kate Boekhorst, 28, from London, had other ideas – she was determined to get abs before Christmas, ahead of a trip back to her home country of New Zealand.

In October, she signed up for an eight-week fitness challenge with F45, and has managed to shed an astonishing 3 stone and gain a set of rippling abs.

The run-up to last Christmas was a different story for Kate, who spent the 2017 festive season overindulging and with no consideration for exercise. 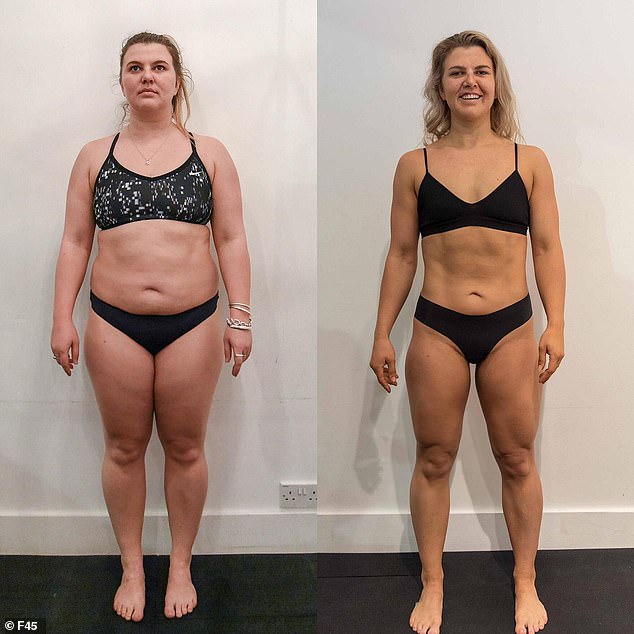 Kate Boekhorst, 28, from London, lost 3 stone and was determined to get abs before Christmas. Pictures from before, left, and after, right, show her dramatic body transformation 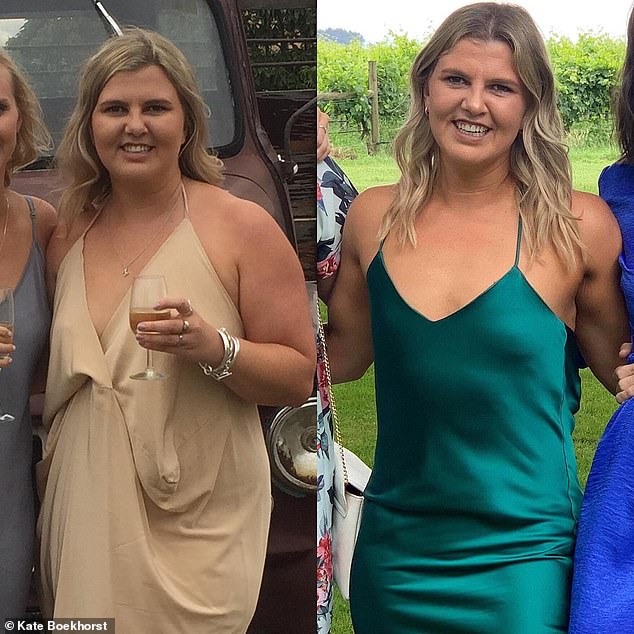 Before and after: New Zealander Kate Boekhorst, who lives in London, wanted to trim up for a trip back home to see family and friends in the New Year 2019, shedding 3 stone (right)

It wasn’t until she spoke to her mother, via Skype, that she had a moment of clarity surrounding her weight.

Her mum saw how much weight she had gained and reminded her of her father’s heart condition; prompting Kate to realise that if she didn’t lose weight, then her health may follow a similar fate.

A few months later, she plucked up the courage to sign up to a gym and put her name down for the eight-week challenge at F45 in October.

The challenge included a tailored food plan and a recommendation of how many times a week she should attend classes.

As part of the package, Kate also had access to an online portal with menu plans, shopping lists and a personalised dashboard to track her results. 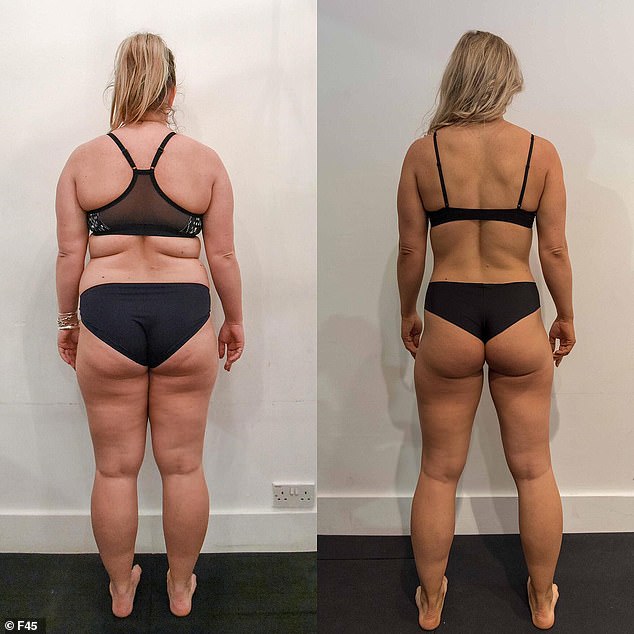 Kate set out to lose a stone, and determined to achieve this she took part in at least 6 HIIT based classes a week at her local Tottenham Court Road branch of F45. 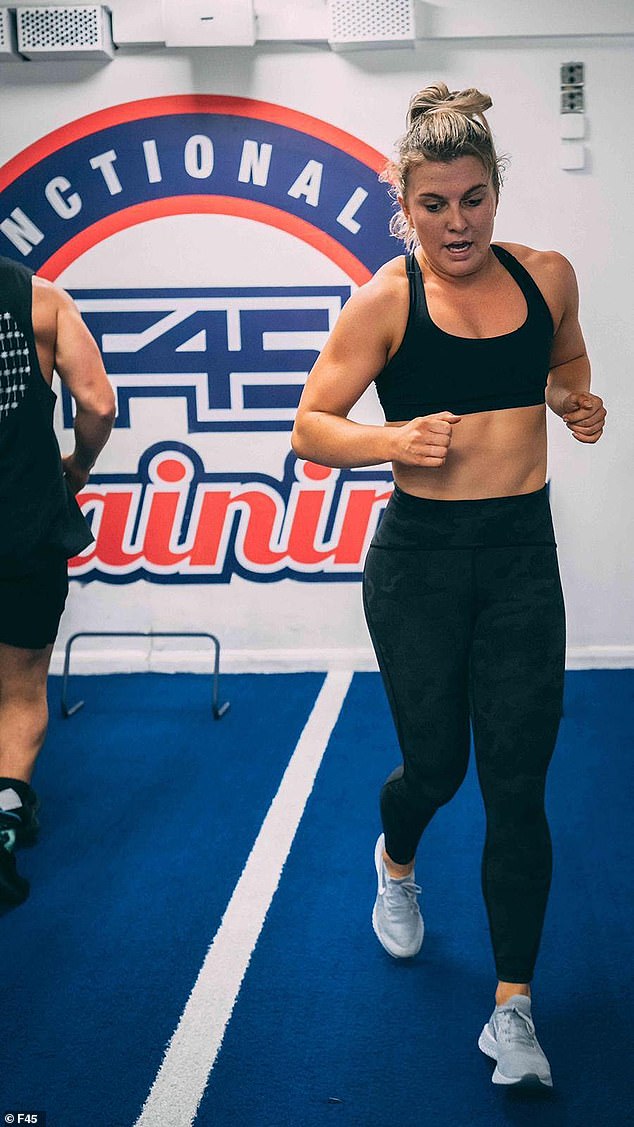 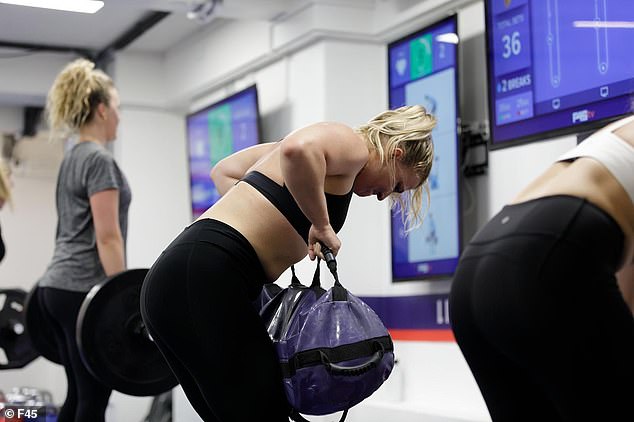 The challenge included a tailored food plan and a recommendation of how many times a week she should attend classes (pictured: Kate doing weights)

Kate set out to lose a stone, and determined to achieve this, she followed the plan strictly, taking part in at least six HIIT based classes a week at her local Tottenham Court Road branch of F45.

She also changed her diet eating lunches and dinners like turkey courgetti, roast vegetable and quinoa frittata and lamb kofta with brown rice and beans.

She would snack on protein banana bars or turmeric coconut protein bites, while breakfast would be buckwheat pancakes with berries or smoked salmon egg white omelette.

In early December when she finished the challenge Kate had lost 3 stone, taking her from a size 14 to a svelte size 8. 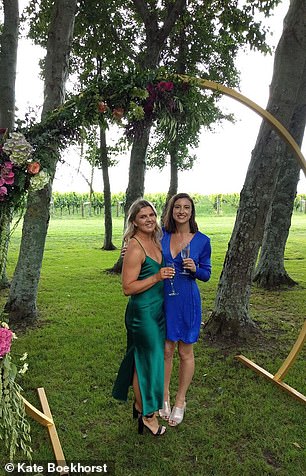 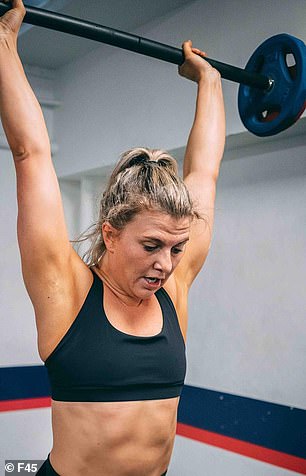 Kate celebrates her achievement with a glass of wine (left with a friend) and working out at her local F45 (right) gym. She has sculpted a set of rippling abs for Christmas

Kate started to notice significant changes to her everyday life when she lost the weight too. She no longer gets out of breath when commuting and her confidence levels are sky high.

‘The team at F45 Tottenham Court Road are something else,’ Kate says.  ‘I know I’ve worked hard for these results but it wouldn’t have been possible without their motivation and guidance.

‘They pushed me from day one and I now feel more confident than ever before. For anyone looking to gain abs in as little as 8 weeks, I highly recommend this challenge.’