COVID-19 might have made thermometers a hot item in 2020 but the weather did its bit too.

As eastern Australia heads towards a soggy, muggy and stormy end to the year, the climatic contrasts to the start of 2020 could hardly be starker. 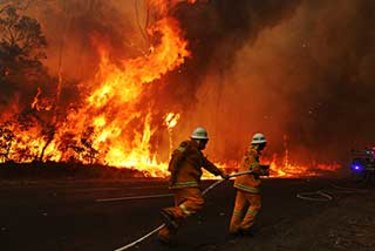 Bushfires, smoke, dust and heatwaves greeted eastern Australia as 2020 got under way.Credit:Nick Moir

As we came off a record year of heat and drought for NSW and Australia as a whole in 2019, we probably weren’t too surprised when Sydney and the state kicked off January with a scorcher.

Adding to the misery of smoke from the multitude of bushfires, Penrith Lakes in Sydney’s west saw the mercury climb to 48.9 degrees on January 4. That reading was the highest ever for an Australian urban area, says Ben Domensino, a senior meteorologist with Weatherzone.

“It’s also a bit earlier than we thought that we’d get this close to 50 degrees” in an Australian city, he said.

With a fortnight to go, that peak in Penrith remains the hottest anywhere in Australia in 2020, Bureau of Meteorology figures show. NSW makes up six of the year’s 10 hottest daily maximums.

Back in January, though, the first signs emerged that the extreme dry and hot spell was beginning to break up. Giant hailstones rained down on Canberra on January 20 in what the Bureau described as “one of the most severe” storms recorded for the ACT. Greater Sydney copped a pelting too. 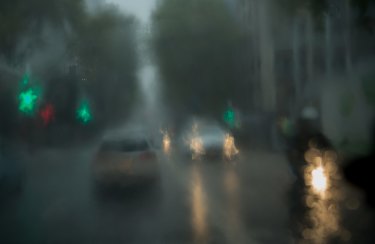 Heavy rain lashes Sydney from a line of storms that crossed the city on February 7, the first of several days of heavy rain.Credit:Wolter Peeters

Cue the heavens to open up more broadly the following month. Over four days from February 7-10, Sydney’s Observatory Hill nestled next to the CBD collected almost 391 millimetres of rain, the highest such total for any month since 1990.

That tally exceeded the previous six months for Sydney and more than Melbourne received in all 2019.

Sydney’s main dam, Warragamba, erased a full year’s decline in a single rain event, soaring from just over 40 per cent to about two-thirds full. By August it would be spilling for the first time since 2016.

While the big wet was generally welcomed, emergency services clocked a record number of calls for a 48-hour period and some beaches lost 25 metres of sand in the first of what would become a series of erosion events through 2020. 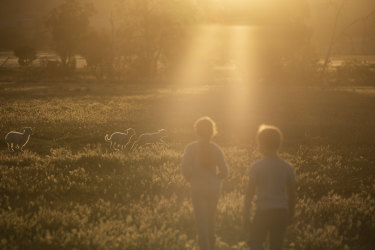 Heidi and Harry Taylor check on the lambs on the family farm outside Coonabarabran in northern NSW in early October. Many parts of the state went from a dustbowl to green pastures after rains finally returned.Credit:Brook Mitchell/Getty

Across NSW, rainfall was more than double the February average at 103.3 millimetres, making it wettest for any month since September 2016 just prior to the multi-year drought setting in.

Sydneysiders would have started to notice the return of milder temperatures with the arrival of autumn. March 14 was a notably chilly day with the mercury reaching only 17.9 degrees, or the coolest March day in 50 years, the Bureau said.

April turned relatively dry for Sydney but the state continued to soak up the rain. The month turned out to be the state’s wettest April since 2015 – not a big stat but another cheery sign of changing conditions on the farm. 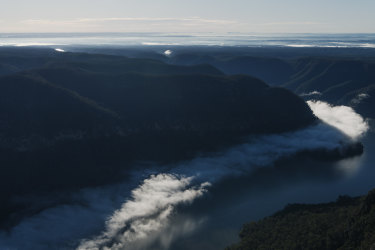 Lake Burragorang, partly shrouded in cloud, sits behind Warragamba Dam. It went from 42 per cent full to spilling within four months, with most of the increase coming from a single rain event in February.Credit:James Brickwood

Coastal erosion became a problem again by May, with a deep low-pressure system in the Tasman Sea pounding beaches with wave heights reaching 10 metres.

The next big bout of erosion came in July, with residents forced to evacuate from Wamberal on the state’s Central Coast. Waves exceeding 11.5 metres were measured off Sydney and Wattamolla clocked wind gusts of 109 kilometres per hour. 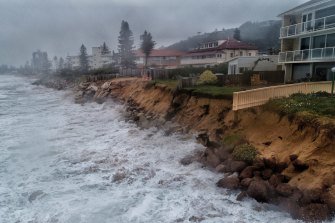 If the east had enjoyed much-needed rain, the Riverina and far-west continued to endure another drier-than-average July. The Bureau chimed in to note that the sub-tropical high-pressure ridge was further south than usual, adding the conditions so far during winter were “consistent with increasing greenhouse gases in the global atmosphere”.

Snow, when it fell in NSW, often comes from the north-east rather than from frontal systems moving in from the west. Those dumps brought cheer to NSW skiers able to meet coronavirus social-distancing.

Victoria’s snowfields, though, had a very poor season but with that state’s lengthy lockdown, few would have noticed. “It was the best possible year for there to be so little snow,” Domensino says. 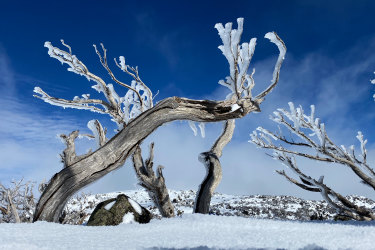 NSW’s ski resorts enjoyed some good snowfalls from storms coming from the east – an unusual source of precipitation in mid-winter.Credit:Alex Ellinghausen

“We don’t see cold weather records very often,” Domensino says. “In a way, I feel it is more impressive than the heat we saw in November.”

Mind you, that November heat was punishing. Not only did it set a new record for the month in NSW with 46.9 degrees on the 28th but Victoria and South Australia also broke or matched November record maximums. Nationally, both November and spring were the hottest on record by some margin. 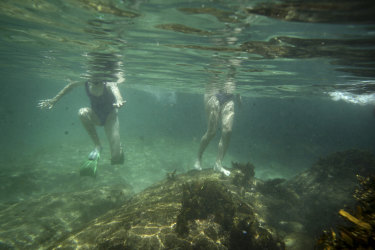 Back-to-back days above 40 degrees in Sydney in November sent many flocking to the beach. The city had only recording such hot consecutive days once before, back in January 1960.Credit:James Alcock

Sydney didn’t miss out either. Observatory Hill’s 40.8 and 40.5 degrees on that 28th and 29th were only the second time the site had posted consecutive days above 40 degrees in the162 years of records.

Late-spring heatwaves are increasingly common as the warming climate pushes background temperatures higher. Australia as a whole has warmed about 1.4 degrees since 1910.

But in late September, the Bureau declared a La Nina event to be underway in the Pacific, making the recent heatwave somewhat surprising. During La Ninas, rainfall typically shifts westwards towards Australia, raising the odds for above-average rain and cooler than normal temperatures.

At a global level, La Nina years also tend to be mildly cooler. However, in a sign of how much the backward warming is overwhelming natural processes, 2020 is on track to be the hottest or second hottest year on record, according to NASA.

By December, though, NSW had begun to experience more La Nina-like weather, particularly in the state’s north where rainfall totals topped half-a-metre in a handful of days in places like Dorrigo, with places in southern Queensland reaching double that.

The return of hazardous surf triggered erosion at popular beaches near Byron Bay and elsewhere.

As 2020′s sand runs out, meteorologists will be among those planning for a busy summer of wild weather, with elevated risks of tropical cyclones and the flooding, wind damage and coastal inundation they can bring.

“We’ll see some of the big weather events in the next few months,” Domensino says.