DITA Von Teese looks like she’s from another era. Even eating a Leon takeaway for dinner, she somehow exudes the glamour of a 1940s pin-up or a film-noir femme fatale.

Partly, it’s her skin – so pale, it looks like she has a spotlight on her at all times – and partly it’s her signature perfect red lipstick, coiffed black hair and floor-length Jenny Packham sequin dress that shows off her famously tiny waist (she can reportedly get it down to a wince-inducing 16.5in). 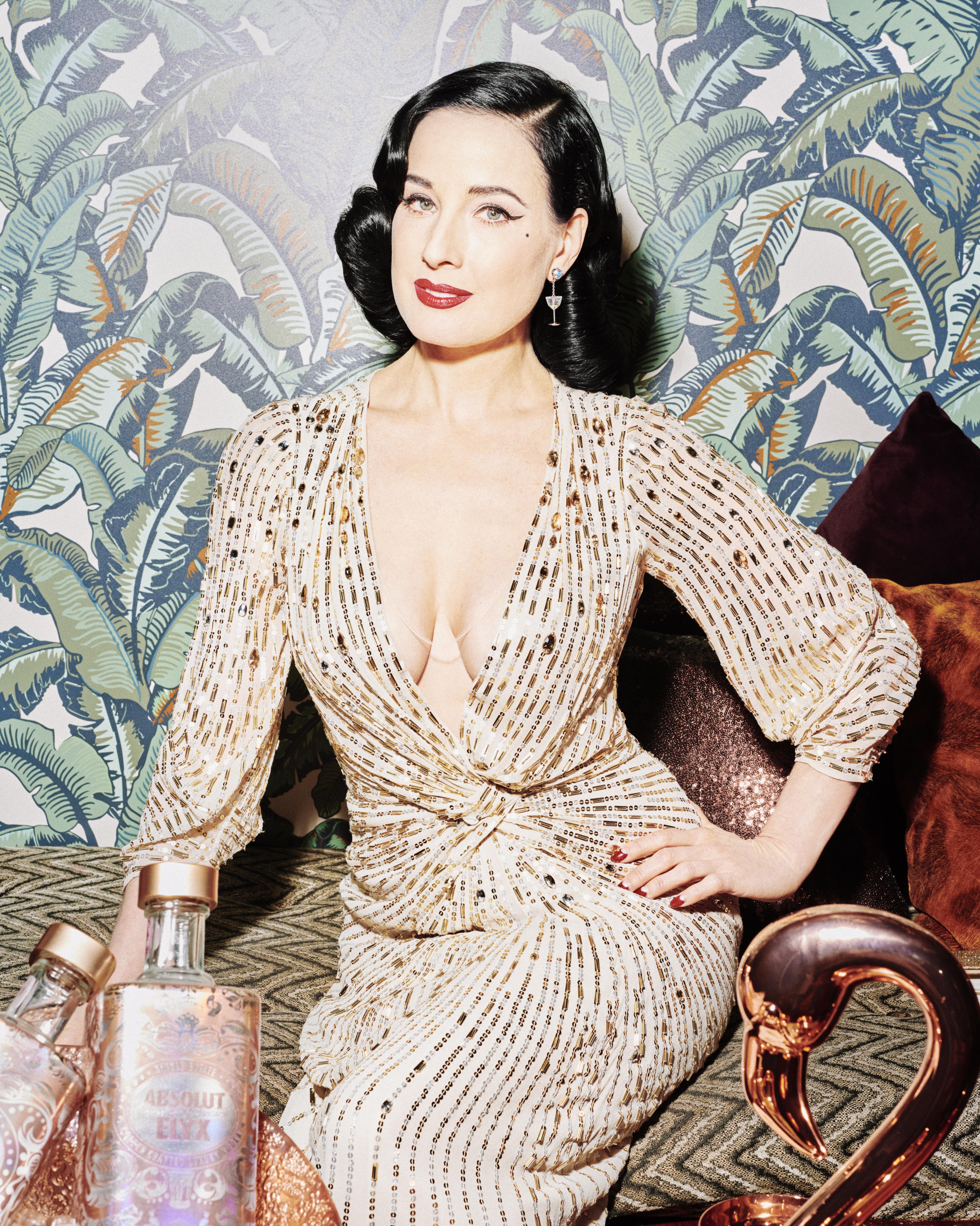 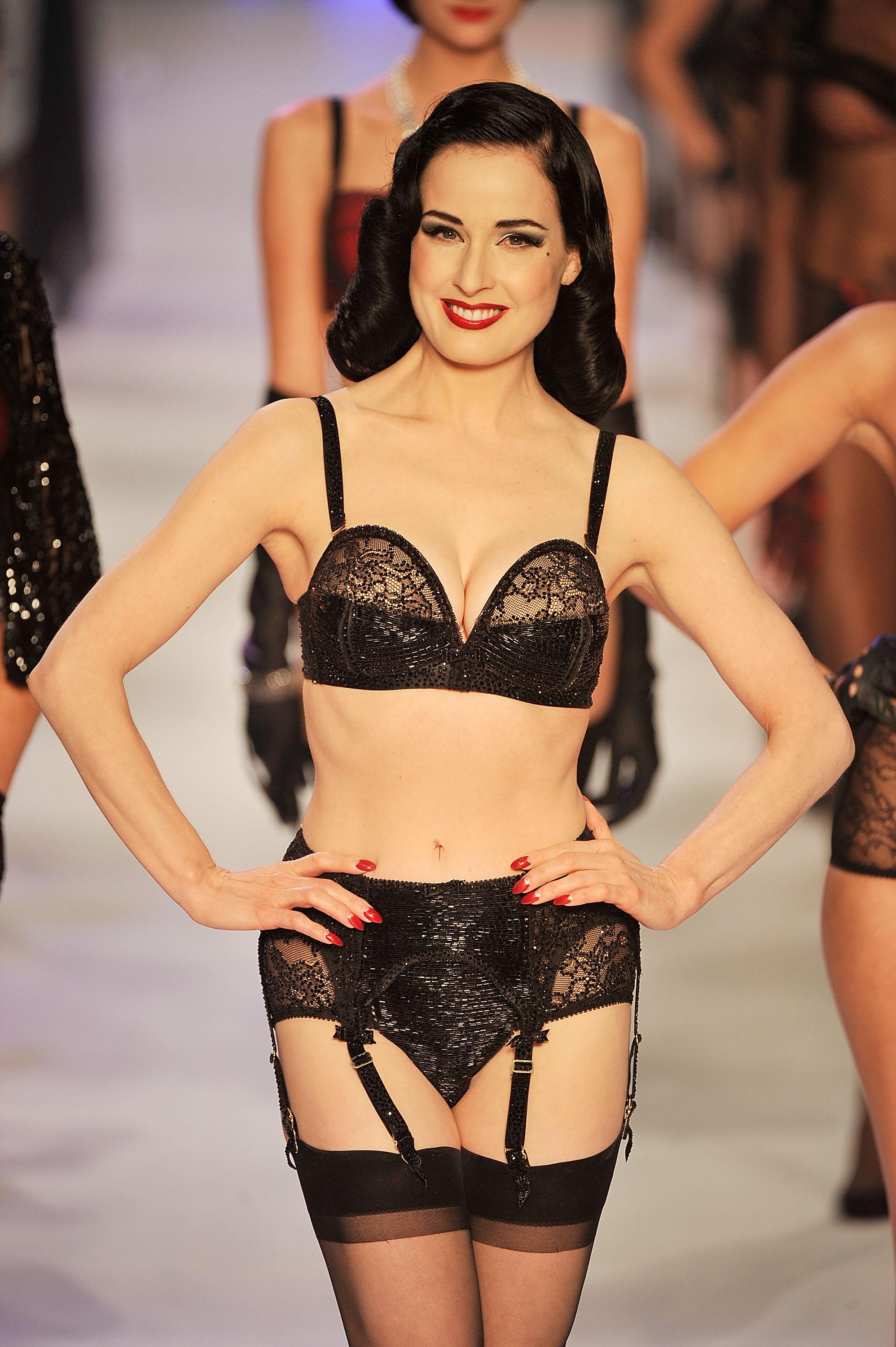 The queen of burlesque grew up as a blonde named Heather Sweet in Michigan and trained to be a ballet dancer. But her love of 1940s movies and a passion for lingerie led to fetish modelling, then burlesque dancing and finally a breakthrough Playboy magazine cover in 2002 – with a typo in the interview changing her stage name from Dita Von Treese to Teese.

Her sexy vintage dance routines, which in her words “put the tease back into striptease”, brought burlesque to the masses in the Noughties and led to collaborations with the likes of Wonderbra, Figleaves and Mac, as well as her own underwear line.

Her seven-year relationship with shock rocker Marilyn Manson (including marriage and subsequent divorce) propelled her to new heights of notoriety.

Now 46 and in a four-year relationship with graphic designer Adam Rajcevich, she could easily be a decade younger, and runs her own burlesque empire as an author, designer, singer and performer. 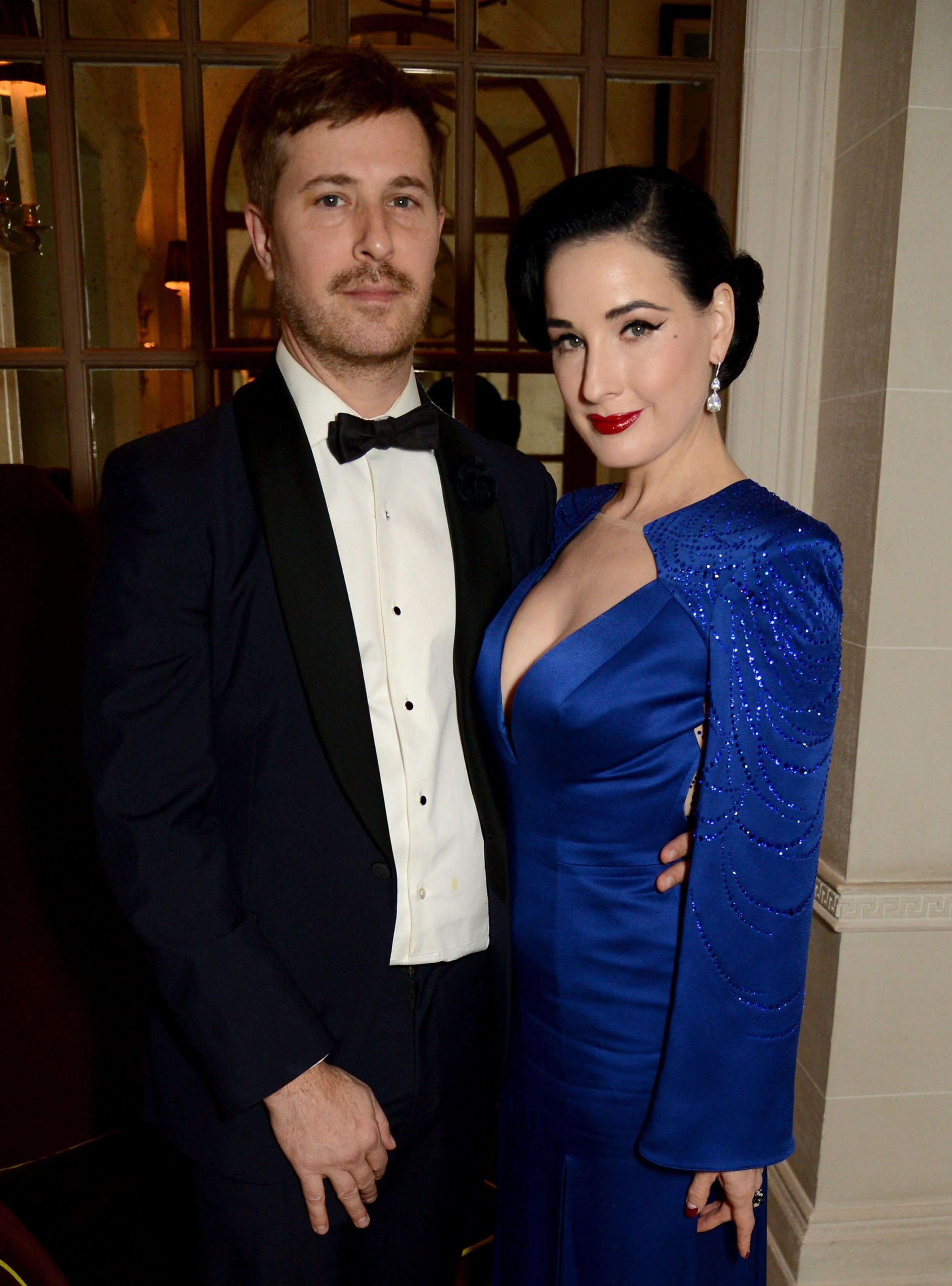 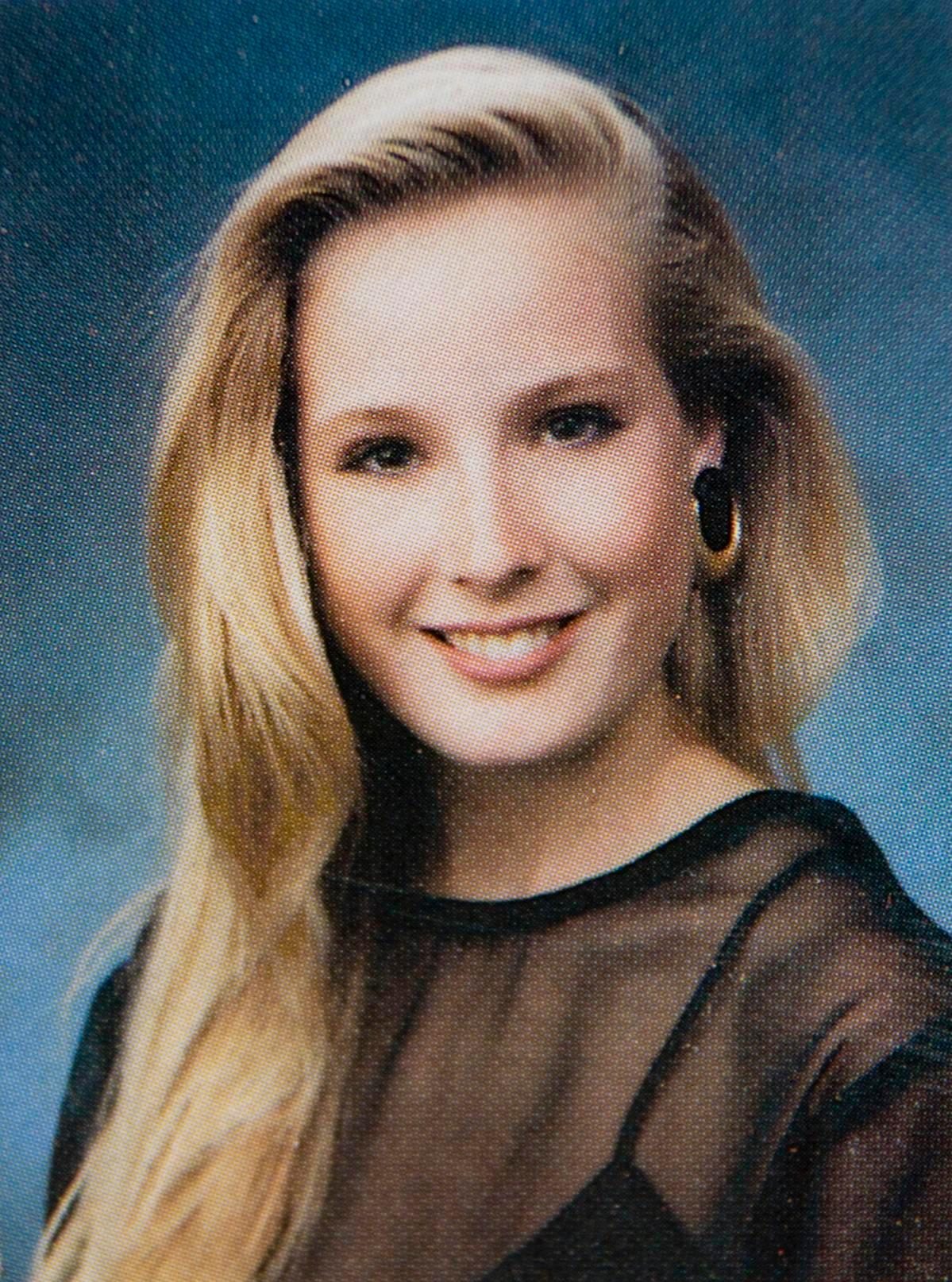 After our interview, Dita will climb into a giant martini glass for a show at The Box, Soho.

First, we grab dirty martinis to talk social media, feminism and stripping at 50. 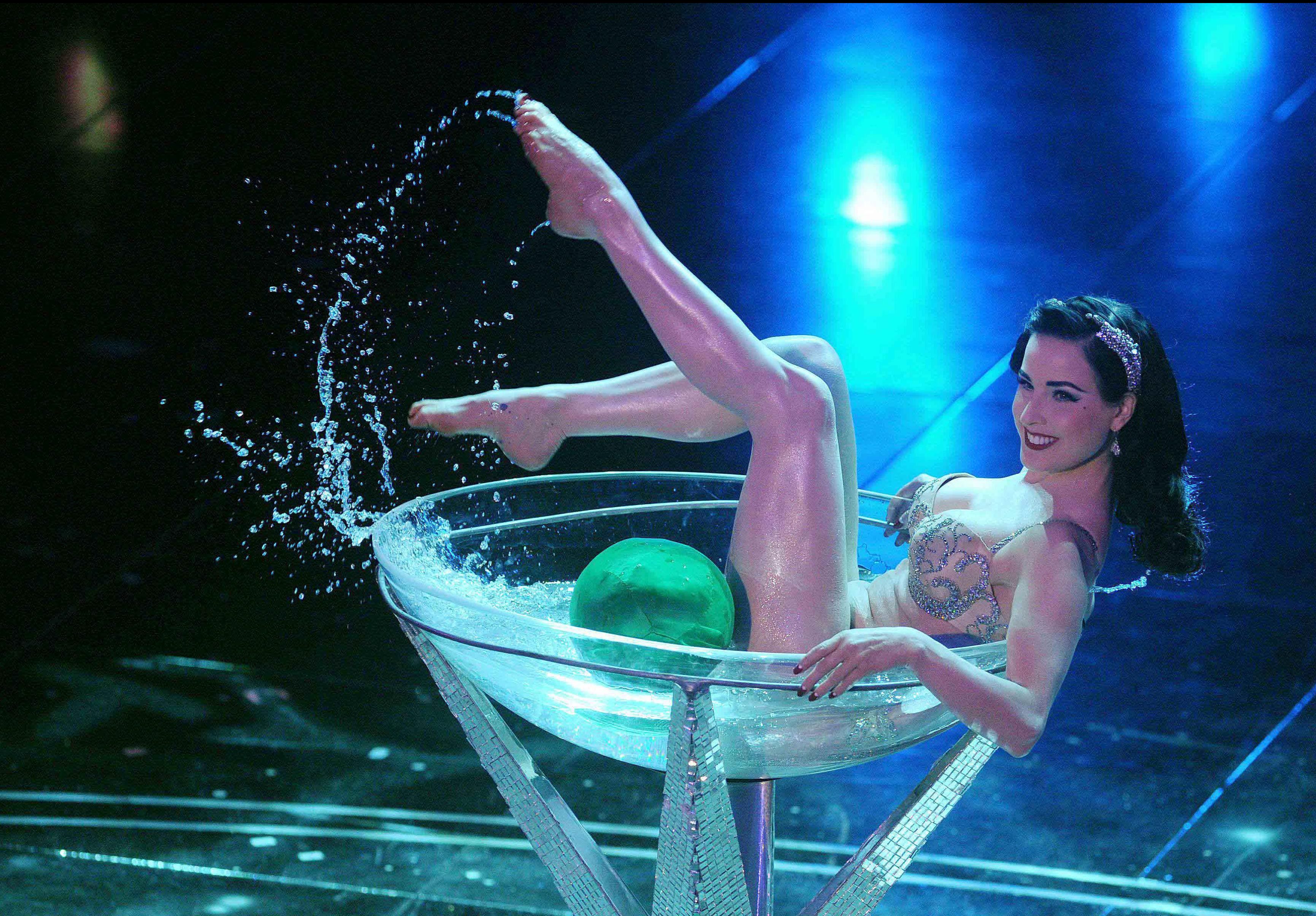 Dita, you look amazing. Do you ever just want to slob out in tracksuit bottoms?

Never. I don’t go full drama every day, but I’m always wearing red lipstick and have my hair in a chignon.

Do you get recognised a lot?

It’s mainly girls and women who approach me, actually. They whisper under their breath: “I don’t want to bother you, but I love what you do…” 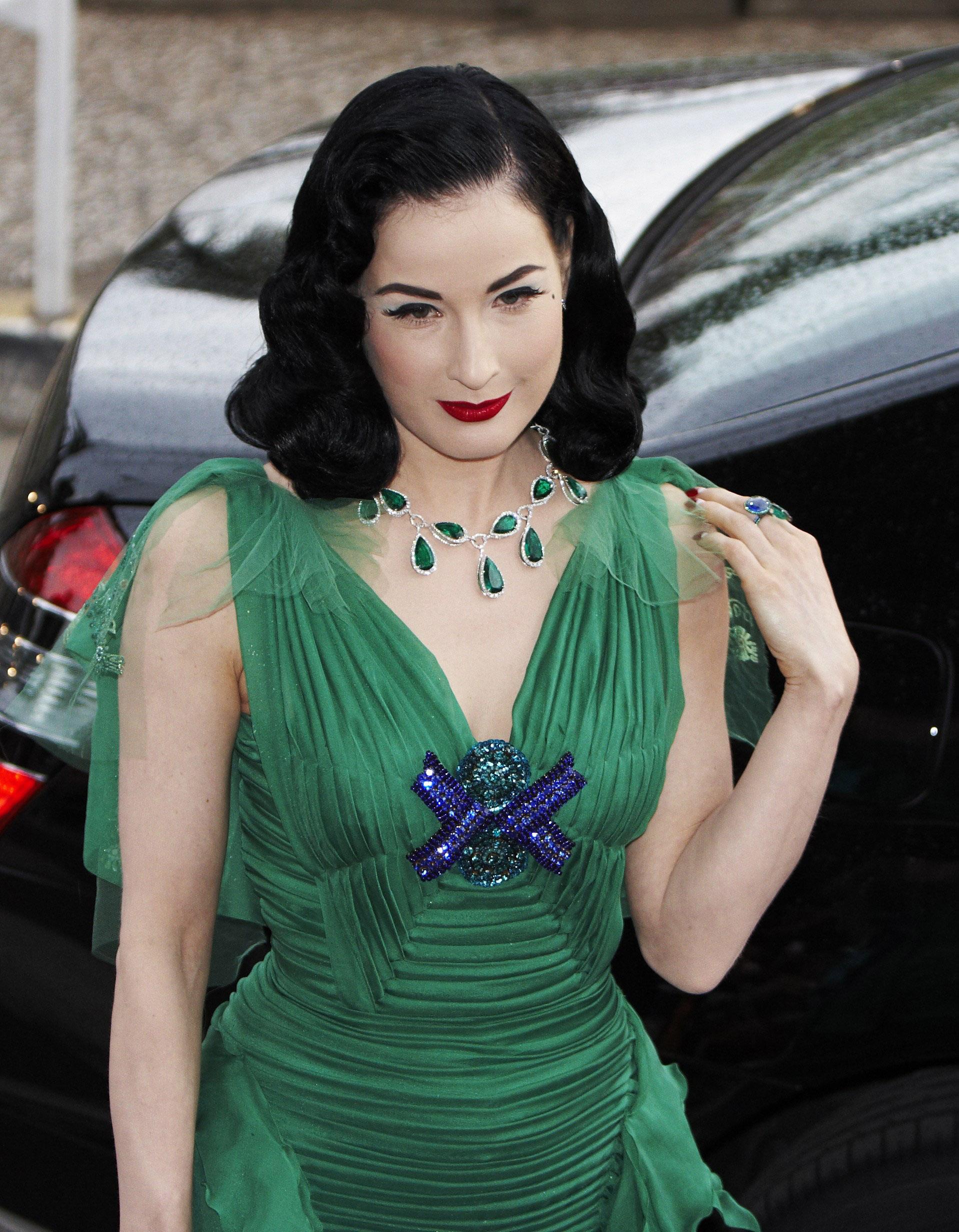 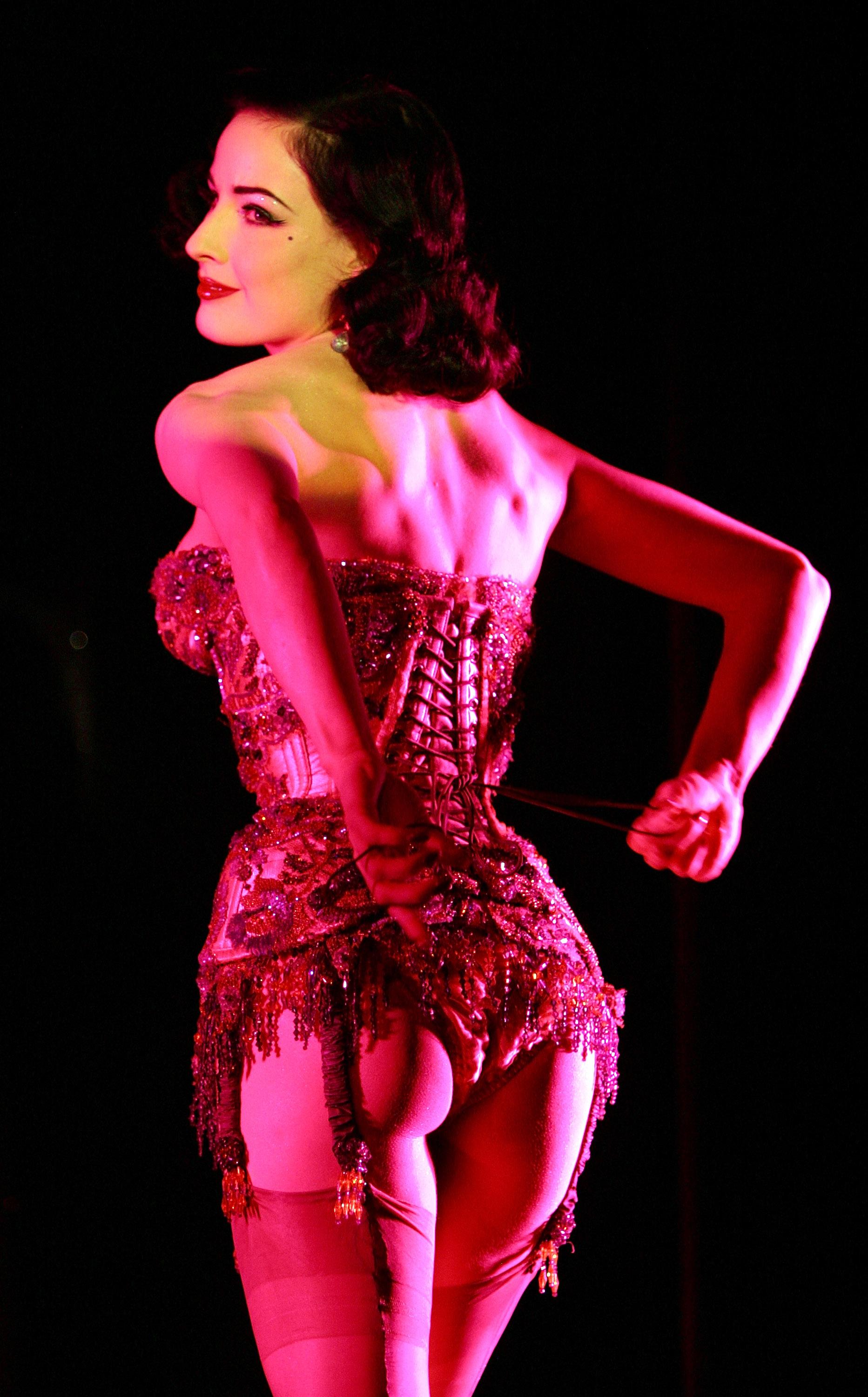 How does burlesque fit into feminism?

I never expected burlesque to be a modern feminist movement, but surely it is? The way my career unfolded as a fetish and Playboy model, I was just trying to fill the space with some diversity.

I thought: “I’m not blonde and tanned, but can I do something interesting in that area?”

Telling my story of finding confidence in glamour and looking to the past for a different kind of elegance and sensuality made me an alternative feminist icon. 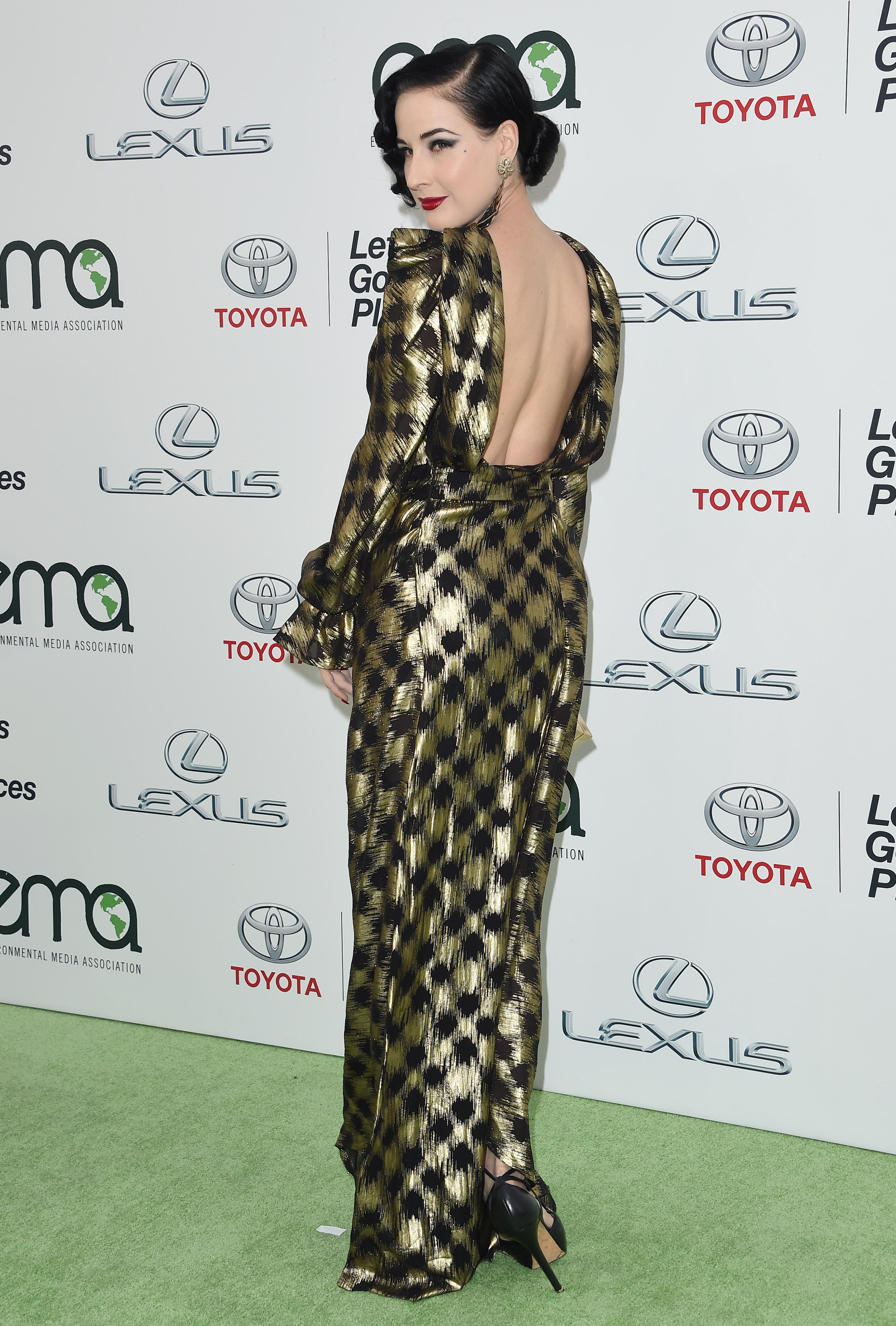 How do you feel about social media?

I like it because it’s given me a lot of power. I’ve sold out five nights at The London Palladium and a whole European tour through social media. But what I don’t like is that it takes up a lot of time.

I even run my cat’s Instagram. Aleister Von Teese has 111k followers.

Do you think it can be damaging to young women?

Yeah, I think it’s a problem. That’s probably one of the reasons I decided not to have children – out of fear of how these things unfold.

People are evolving in a different way and it can be unnerving how young people are being shaped.

It used to be stealing a Playboy from under the bed, now young people have access to all this pornography and it’s shaping how they think about sex. 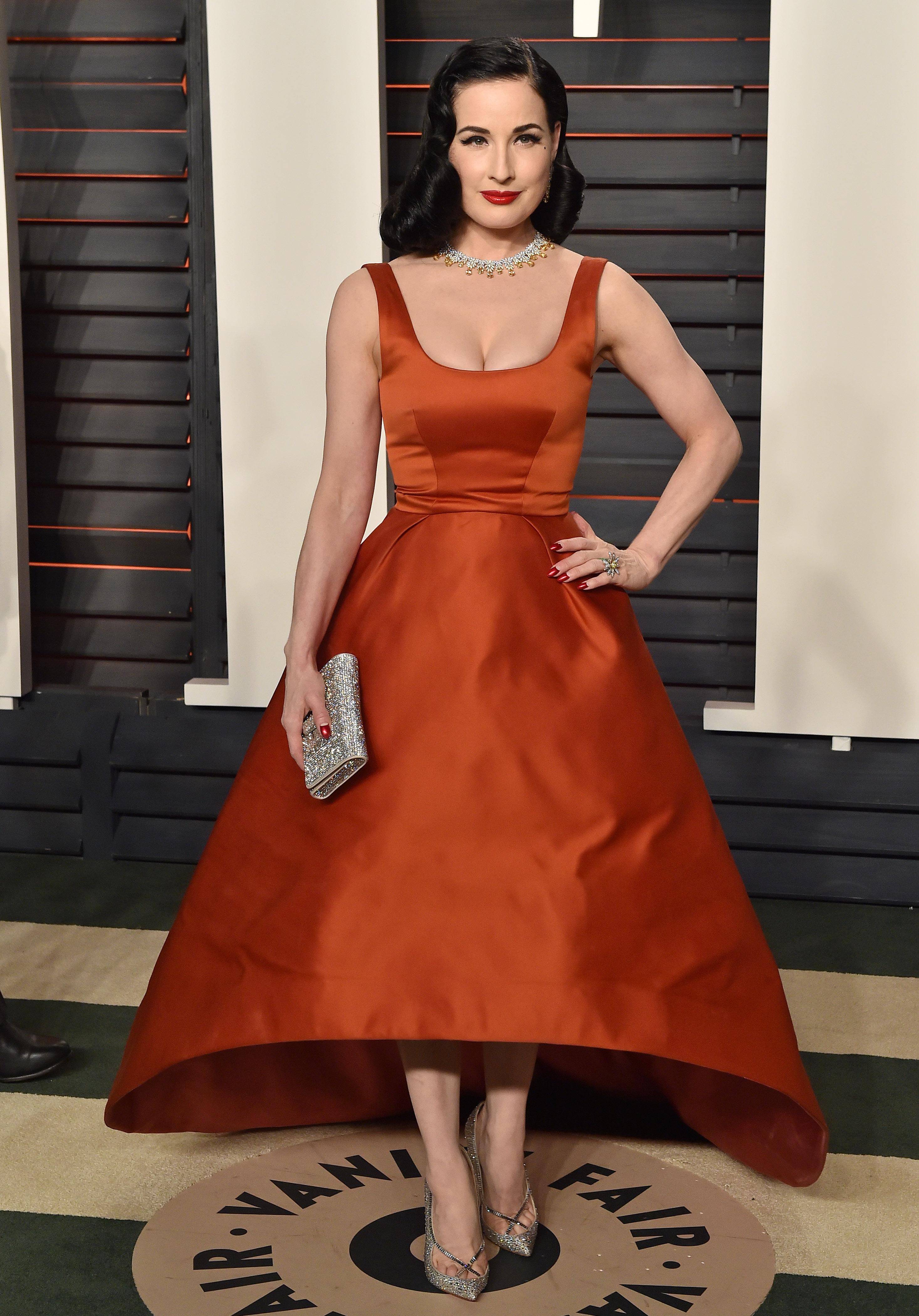 Has the #MeToo movement affected you?

#MeToo has never come into my work. I thought about all the #MeToo things that have happened to me in my life and they haven’t been business-related.

I’ve walked away from deals because I didn’t like somebody or feeling obliged in any way, but as a teenager having to navigate how men in power or older men are around you, I have all kinds of stories.

I remember being 15 and people doing or saying inappropriate things. But I think it’s great that we’re talking about this now.

I overheard a young woman recalling being cornered in a public restroom recently and I was like: “Wow, we’re talking about this openly now.” It’s a big, swirling, great conversation.

I don’t know, it’s new territory. Sometimes I let the ageist mentality get the better of me.

Then I look at women who are older and still standing for beauty and sensuality at different stages of life, and it really inspires me. 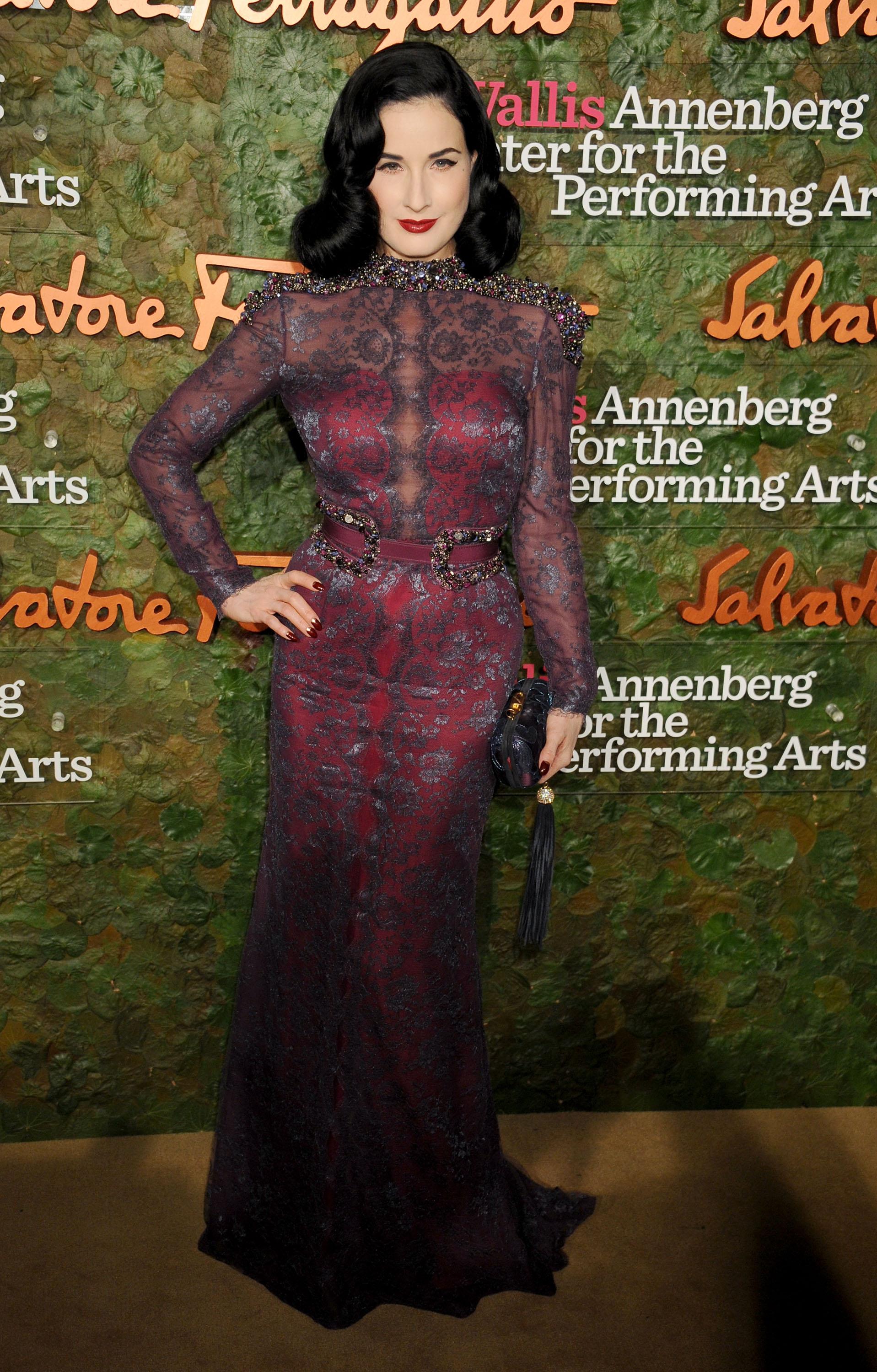 I was with Gwen Stefani [49] a couple of months ago – she’s older than me, looking better than ever and performing.

Jennifer Lopez [49], too. People like that remind me that we have to pave the way and if we want things to change, we have to be the change.

Originally I thought: “I should step aside if I start not looking as good as I did.”

Then you think: “No!” Of course, the shows evolve – it’s not girlish; it’s sophisticated and womanly with a strength.

How do you stay in shape?

I work out four times a week. I do Pilates, CrossFit with kettlebells and strength training.

I also do a striptease ballet class with my girlfriends.

I don’t go full drama every day, but I’m always wearing red lipstick and have my hair in a chignon

Is your home in LA full of vintage pieces?

I have a lot of vintage antique taxidermy, including a pair of swans. They’ve all been deceased for 75 years or more.

I’m definitely a maximalist, not a minimalist. Every room is a different colour.

My whole kitchen is copper and British racing green – it’s like a fairy tale.

How vast is your underwear collection?

Not only do I have a big archive of vintage pieces that I’ve been collecting since I was 16, but every style that I design I have in every colour.

Though my Mr Pearl corsets are my most cherished items – he makes the best corsets in the world. He’s a magician.

Sexy underwear is often a good way to spice up a relationship, but we’re guessing you don’t really need that option…

Yeah, I have to wear the opposite! Definitely in my long-term relationships, my men have been conditioned to black lingerie and garter belts. 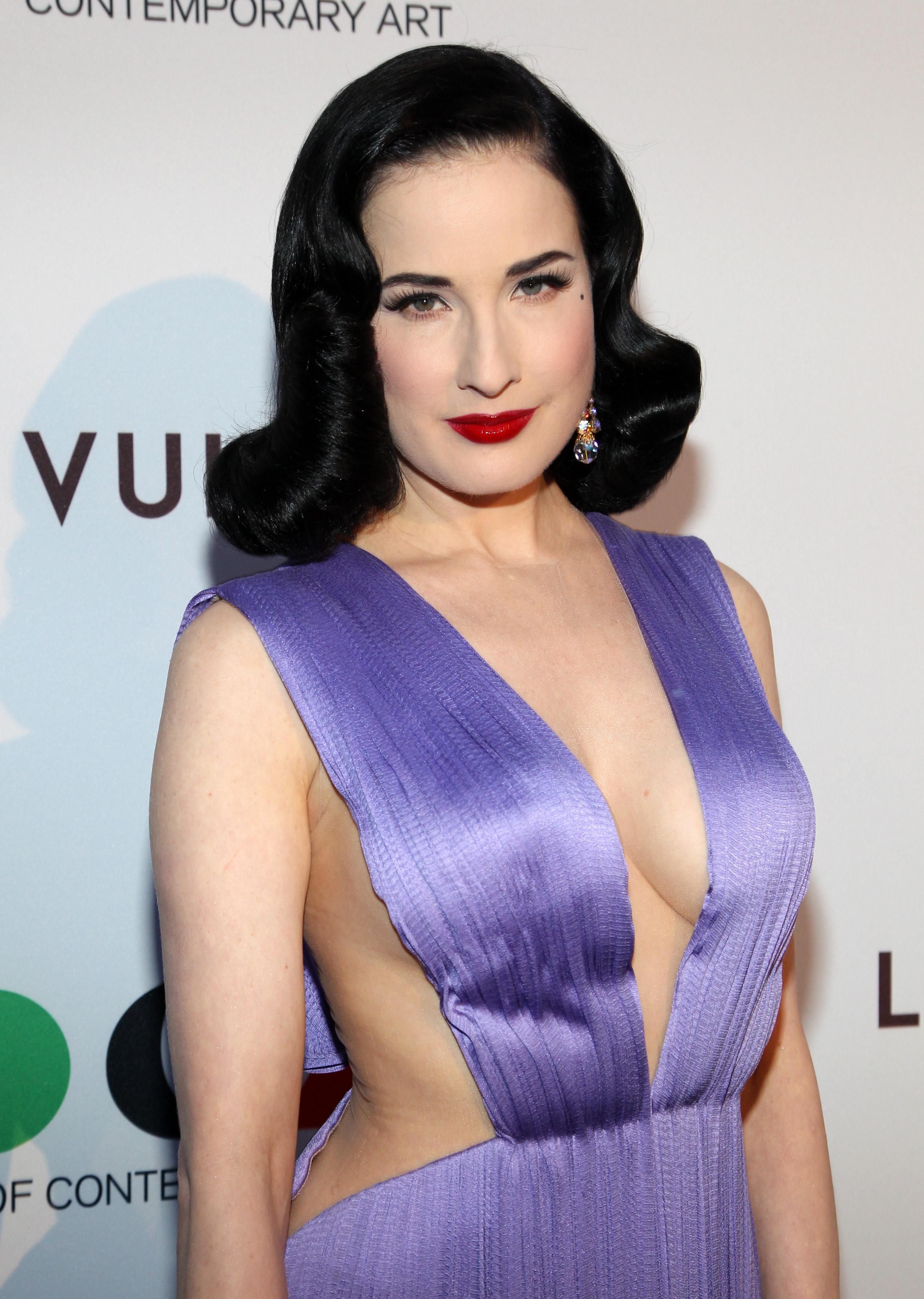 So what do you do?

It’s a little more complicated. The other day I put on this beautiful black cashmere jumpsuit and [Adam] was like: “Wow, I like that!”

I was totally covered up, but he was saying: “This feels so sensual”.

So it’s things like that when you least expect it. Who knew that would flick his switch? But it did.