In a special box on Lauren Viera’s jewelry stand is her most precious possession.

The leaf, found on the floor of a hut, was presented to her in 2013, wrapped in the shape of a ring when Ms. Viera’s now-husband, Jason Tinkey, a 41-year-old geographer, proposed on a beach in Grenada. 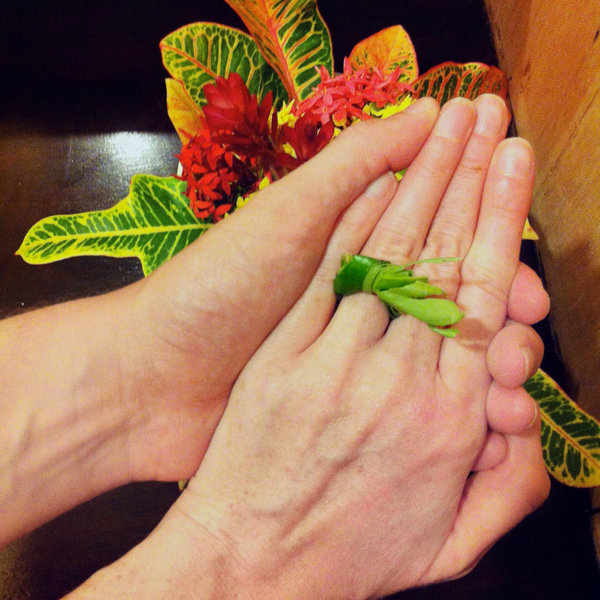 “He had wrapped it into a circular thing, and it fit, and that was it,” said Ms. Viera, 40, a Chicago-based freelance writer. The leaf sealed the deal, and they were engaged.

Forget the diamond engagement ring. These days, anything from a leaf to a puppy will do the job, as couples seek out ways to create their own love narrative from the very beginning.

“Customization is at an unprecedented level among couples who are engaged, or nearly there,” said Kylie Carlson, the chief executive of the International Academy of Wedding and Event Planning, an online school with seven global campuses.

“Instagram and Pinterest offered unprecedented access to ideas and examples,” she said. “For better or for worse, some were eager to be that next viral hit.”

Whether guided by the hope of fame or the simple desire to do their engagement their own way, the latest crop of newly engaged couples aren’t flashing sparklers.

“The trend of bending the rules started a few years ago, and has been gaining steam ever since,” said Lauren Kay, the deputy editor of The Knot.

“While a ring is meant to be a symbol of love, other things can absolutely take its place,” she added, “especially if jewelry isn’t important to the couple, or if a diamond is a stretch financially.”

Damon Jones said he and his now-wife, Eve Ewing, a writer, are averse to diamonds because of the mining injustices. Mr. Jones, an economist, also believes that the value of diamonds is inflated through marketing and rationing.

Mr. Jones suggested that instead of a diamond ring, they create a scholarship so their engagement investment could have more of a lasting impact. The Ewing-Jones Scholarship sends a Chicago high school freshman to a nonprofit summer program called the Leadership Academy at the W.E.B. Du Bois Scholars Institute at Princeton University. (The couple declined to disclose the amount of money they put into the scholarship.)

“For the price of a midlevel diamond engagement ring, we could send a student to this program for two summers,” Mr. Jones said. “Of the two decisions, to embrace an act of service and to avoid a common tradition, the former was the more important thing that we focused on.”

Others are avoiding that common tradition simply because of the expense. The typical American spends about 4 percent (or two weeks) of annual pretax income on an engagement ring, according to an online poll conducted for The Upshot by Morning Consult.

An engagement ring wasn’t present when Grant Dragan, 37, an investment banker from Chicago, proposed to his now-wife, Kathleen Dragan, 38, a children’s book author. After telling her that she was his best friend, he asked her to marry him, presenting her with plane tickets to visit Paris. She was ecstatic.

“I didn’t care at all about the lack of a ring,” said Ms. Dragan. “Your engagement says a lot about who you are as a couple, and in my mind, we were equal partners who loved adventure and were excited about our future together.”

For Stephanie McKenna, 30, of Oakland, Calif., the entire proposal and what followed was representative of her alternative views on weddings and marriage, where a diamond didn’t belong. She also didn’t wear a white gown for her wedding day, which was last May. She opted instead for a gold beaded 1920s dress.

Ms. McKenna, who is a graphic designer, took her then-boyfriend, John McKenna, a 34-year-old bartender and bladesmith, on a trip to New Mexico, where she proposed to him with an engraved tie bar.

Following the proposal, the couple got matching engagement tattoos on their ring fingers.

Sometimes, however, proposals without the ring get a little lost in translation. Mark Ruthman, 42, a product manager with the American Medical Association originally from Highland Park, Ill., presented a piece of paper containing three photos of puppies to his then-girlfriend after they returned from a trip visiting his relatives.

“Will you be my mommy?” the paper said.

Merav Ruthman jumped up and down, as she had always wanted a dog, and was just waiting for the right time in her life to adopt.

She was so excited, in fact, that she initially missed what the paper said at the bottom: “And will you marry my daddy?”

When the confusion was cleared, she accepted his proposal, and the couple adopted a dog together, a basset-beagle mix, before getting married.

Other times, the non-diamond proposal was exactly what was requested.

Nivard Bronckaers, a 28-year-old lawyer living in Brussels, fell in love with his boyfriend on date No. 3. They discussed marriage — and the prospect of a diamond engagement ring.

“I absolutely didn’t want a ring, as I find it a bit much to have an engagement and a wedding ring as a man,” Mr. Bronckaers said. “Kasper was, however, set on diamonds, and kept teasing me in the following years that I would need to wear the ring if he’d buy it and ask me.”

When the proposal came, complete with a closed jewelry box, Mr. Bronckaers was nervous about the prospect of a diamond ring, but said “yes” anyway.

It was a surprise diamond-encrusted watch, and Mr. Bronckaers has worn it every day since. They’re planning a September wedding.

The upshot: Anything goes.

“At the end of the day, you’re choosing to commit your life to someone else,” Ms. Little said. “That’s beautiful, with or without jewelry.”