Rabia Ahmad’s parents, who live in Portland, Ore., were not around to witness her exchange of vows with Christopher Pattison on Dec. 19 at the Manhattan Marriage Bureau. They were visiting relatives in her father’s native Pakistan.

But Ms. Ahmad, 39, was not without the warmth of family to greet her when she stepped out of a Mercedes-Benz in front of 141 Worth Street wearing a blush-colored wedding dress amid the whir of cameras, the sun peeking at her from behind dark clouds on a chilly day.

Clutching a small bouquet of white roses and pine stems, Ms. Ahmad made her way past a dizzying array of soon-to-be and just-married couples and into the arms of Harper and Ellis Marsili-Batt. The blonde 5-year-old twin girls are part of Ms. Ahmad’s “New York family,” an ethnic mix of friends who have been helping her view life through an ever-widening lens since she arrived in New York City 22 years ago.

“I was raised in a very conservative Muslim community in Portland, and left there at 17 to attend N.Y.U.,” Ms. Ahmad said. “I liked the freedom that came with living in New York, and never went home.”

She began socializing, most often, in Islamic circles, “and dated a couple of Muslim men,” she said, but it didn’t work out quite as she, or her parents, had envisioned. 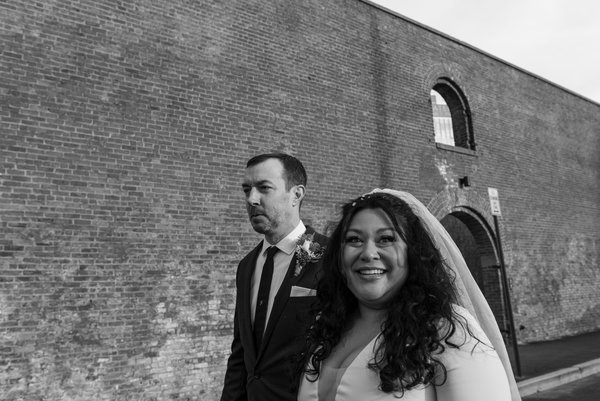 “The guys I dated followed old-school Muslim traditions,” said Ms. Ahmad, now a vice president for media relations at Home Box Office in Manhattan. “I soon realized that what drew us together were the basic commonalities of our religion. But we had a different thought process and a different view of the world, as they were much more conservative than I was.”

As the years passed and her circle of friends became more ethnically diverse, Ms. Ahmad began dating men of different faith, much to the chagrin of her father, Dr. Masud Ahmad, a cardiologist in Portland, and her mother, Salma Ahmad, a Filipino woman who was raised Roman Catholic but converted to Islam after meeting her husband, and who is now president of the Islamic Society of Greater Portland.

“When my parents realized that I was opening my mind to meeting other guys, which meant looking outside the tribe, it was a jagged pill for them to swallow,” said Ms. Ahmad, the youngest of three children. “I became the black sheep of the family.”

In September 2015, Ms. Ahmad met Mr. Pattison on OkCupid, describing him to family and friends as “this 6-foot-tall white guy who looked like Adam Yauch of the Beastie Boys.”

“Not exactly what my parents had in mind,” she said, laughing.

But it was no laughing matter to her father.

“As far as I was concerned, as a Muslim father, it was my obligation to see to it that my daughter married a Muslim man,” Mr. Ahmad said from Saudi Arabia in a recent phone interview. “At the end of the day, the man Rabia was going to marry would be her decision, but she knew where I stood on the matter.”

Mr. Pattison, who was born and raised in Burlington, Vt., and graduated from Champlain College there, was working as a cook for a catering service by day, and as a club D.J. by night when he met Ms. Ahmad.

“He was a genuinely sweet guy who was old-school respectful, opening doors, pulling out chairs, all of those chivalrous things,” Ms. Ahmad said. “He was also a history buff who was fascinated by different cultures from around the world.”

Mr. Pattison made the 12-hour, round-trip drive to visit Ms. Ahmad in New York just a week after meeting her online.

“From the beginning I realized that Rabia was a really kind, considerate and nurturing person,” he said. “I just loved being around her.”

For the next year and a half, he drove every weekend from Burlington to Brooklyn to spend time with her, racking up nearly 50,000 miles on his 2005 Ford Focus during the long-distance phase of their relationship.

“It wasn’t an easy trip, but Rabia made every mile worthwhile,” Mr. Pattison said. “Every time I came to visit she would always go out of her way to make me feel welcome, and did little things to show she cared, which made me want to keep coming back.”

One day in May

2017 he decided to stay for good. He moved into Ms. Ahmad’s studio apartment in Brooklyn Heights, leaving in his rear view mirror the only life he had ever known in Burlington.

“I just picked up and left, and at first, it was definitely a struggle, especially when you consider it took me six months to find a job,” Mr. Pattison said. “But Rabia kept saying, ‘Just hang on, we will persevere,’ and eventually I got both feet down on the ground.”

Mr. Pattison, now 44 and a digital designer in Manhattan for the Smithsonian Network, for which he handles digital advertising across all platforms, had barely landed on his feet when Ms. Rabia’s parents came to Brooklyn for a first visit in December 2017.

“I knew that her parents were not happy that I wasn’t a Muslim,” Mr. Pattison said, “so I was very nervous about meeting them.”

Among the things that Ms. Ahmad’s father brought with him from Portland was literature about Islamic customs, teachings and overall history that he asked Mr. Pattison to read.

In September 2018, Ms. Ahmad and Mr. Pattison visited her parents in Portland, where Mr. Pattison, a lifelong Roman Catholic, met with an imam who was close to the Ahmad family.

After what Mr. Pattison described as “a series of very spiritual and extremely inspirational discussions,” he did indeed convert to Islam.

“Immediately after the conversion, I asked Rabia’s father for her hand in marriage,” said Mr. Pattison, who proposed to Ms. Ahmad the following month.

Mr. Ahmad was thrilled. “I have been very impressed with Chris, who clearly loves my daughter and has willingly accepted Islam,” he said. “I cannot criticize the road that Rabia and Chris have taken regarding his conversion, as I took the same road with my own wife.”

When Ms. Ahmad began discussing the two life-changing sacrifices made by Mr. Pattison on her behalf — leaving his community, and then his religion — she began to cry.

“His willingness to leave a life behind to commit to the adventure of New York, his expressed interest in learning about my cultural background and faith, and his acceptance of my loud but loving family, made me fall into the kind of love that I had almost given up on finding,” she said. “Bottom line: I would have gotten down on one knee if he hadn’t beat me to the punch.”

Mr. Pattison said that he was fully aware that his decision to convert to Islam “might not be seen as a popular choice by some who do not look favorably upon Muslims in this current political climate.”

“Nevertheless,” he added, “it was the right choice for me.”

Ms. Ahmad said: “Chris did a ton of research before converting. This was no split-second decision, and was not made based on the perspective of a bunch of religious zealots, but from a very modern-day view of Islam and a belief system that he could see himself being a part of.”

Mr. Pattison’s father, Leonard Pattison, who lives in Burlington, said of his son’s decision to convert: “I thought it was fantastic that he would do that for Rabia. It shows true love and commitment.”

”Rabia is such a warm, beautiful person, maybe the best person I have ever met,” said the elder Mr. Pattison, who co-owns Control Technologies, a company, based in Williston, Vt., that installs temperature controls for heating and ventilation systems.

“She’s the best thing that ever happened to my son, and as diverse as their backgrounds are, they are a match made in heaven.”

Leonard Pattison was one of the many guests in attendance at the civil ceremony, which was presided over by Michael McSweeney, the New York City clerk, at the Manhattan Marriage Bureau. Other guests included Mr. Pattison’s mother, Linda Banks of Brevard, N.C., his stepmother, Eileen Pattison, and Ms. Ahmad’s sister, Maryam Ahmad, along with her 6-month-old-daughter, Naila Shah, who live in Hermosa Beach, Calif. (Her husband and a son could not attend, nor could Ms. Ahmad’s brother, Tariq Ahmad of Oakland, Calif., and his family.)

“Christopher and Rabia, we wish for you a love that makes both of you better people and continues to give you joy that provides you with energy with which to face the responsibilities of your lives,” Mr. McSweeney said to the couple after they exchanged wedding rings and vows.

Just after Mr. McSweeney pronounced the bride and groom married, they exited the building to showers of applause and confetti from family and friends, including three members of Ms. Rabia’s “New York Family,” Dan Marsili and Erik Batt, the fathers of the twin girls, and Shuaib Siddiqui, her best friend from N.Y.U.

“Rabia is still the same old bubbly person she was the day I met her,” said Mr. Siddiqui, who has known the bride for more than 20 years. “When she was younger, she kept to a certain sense of the way things were supposed to be based on what her parents had taught her. But as I watched her mature, she forged her own path, and decided that she was not going to marry someone just because they were raised like she was. Instead, she would wait for someone, from any walk of life, with values and morals that fell in line with hers, someone with a lot of good inside of them, and she found all of that in Chris.”

After the ceremony, the newlyweds and their contingent went to Dumbo, Brooklyn, to take more photographs before enjoying dinner later that night at Lucali’s, a restaurant in the Carroll Gardens neighborhood of Brooklyn, where they dined on pizza, calzones and meatballs, the bride’s favorite, that was made specially on her wedding day by Mark Iocono, the owner of Lucali’s. Dessert included a blackout chocolate cake from the Little Cup Cake Shop, also in Brooklyn.

On July 5 and 6, the couple are to take part, before 300 guests, in a traditional two-day Pakistani wedding ceremony that will conclude at the Sentinel Hotel in Portland, a gift from the bride’s parents.

“I’m very much looking forward to it,” Mr. Ahmad said. “There is so much worth celebrating.”

Where The Manhattan Marriage Bureau

Happy and Happy The bride chose Dec. 19 as the date to legally marry, as that is the date of her parents’ wedding anniversary and her parents’ birthdays.

A Familiar Ring The bride’s mother removed the center stone — a rose-gold, round-cut diamond — from a ring she owns and gifted it to the couple. They used it as the centerpiece for the bride’s engagement ring, which they decorated together, adding, among other shiny things, pear-shape diamond baguettes.

What They Wore The bride wore a blush-colored Jill Stuart dress with an ivory silk organza veil, while the groom wore a charcoal gray Ludlow suit by J.Crew, and a black Paul Smith tie emblazoned with a music note that was a gift by the bride.