PARIS — So there we were, up early on a Sunday morning as the fashion season entered its final few days, caravaning out yet again to an echoing space in the banlieues of Paris, entering a room scented by the nausea-inducing aroma of freshly laid tar and cast in a blood-red glow, assaulted by strobe lights and pounding chords.

Yeah, we know we’re all way out of our comfort zone these days — it’s been a theme of show after show for the last three weeks. Tell me something new, Mary Lou.

Then Demna Gvasalia at Balenciaga did.

Playing with many of the same subjects that have preoccupied other designers and turned into something of the themes of the season — the bourgeoisie, the power woman, glamour — he tweaked them and twisted them in a kind of grim and kind of gorgeous and entirely unrelenting stream of the not-so-mundane for both women and men.

It began with a black trouser suit, the shoulders pinched, just a little, into a stiff little puff like a pair of pricked-up ears. Segued into short pussy-bow silk dresses, some with an Eiffel Tower print (Mr. Gvasalia loves a bit of postcard kitsch). Then came great coats, in bright, primary shades of red, green, yellow and blue, with the shoulders rolled upward to peak at the back of the neck and curve down from there. A seam traced the back from elbow to elbow, like the line of a phantom stole, hugging the arms in. 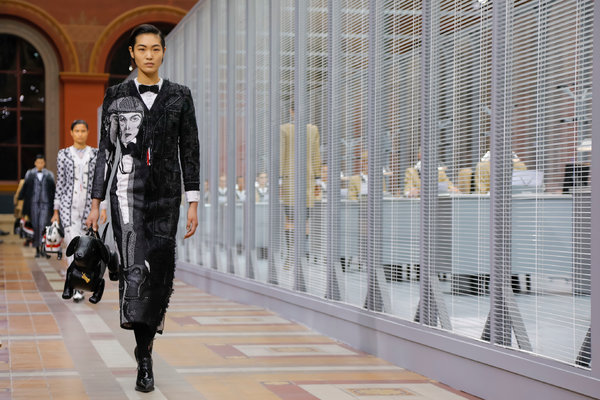 Silk blouses tucked into crisp A-line skirts hung from a ring that orbited the neck, out of which came peaked collars framing the face (ribbed knits got the same treatment). A plush shearling had big puffed sleeves and a collar, both dropped at the back to mimic the fall of a coat as it slides off the shoulders.

There were totes-cum-brown shopping bags with melting smiley faces and little cross-body numbers with more of that Paris souvenir cheese. Just when you thought it was over, something else came down the pipe (or out from backstage) that made you lean in closer, look — and look again. At which point you might realize that what you thought you saw was not exactly what was going on.

That’s certainly true enough. Welcome to life in 2019. It’s about time everyone started to pay attention. Now you have something to wear.

This has long been the guiding principle at Sacai, where Chitose Abe has her own form of splice and dice methodology, which she uses to subvert both shape and stereotype. Sometimes she can get lost in her own puzzlemaking but this was not one of those times; it was, rather, a cleverly feminine reclamation of the military tailoring that has been ubiquitous this season, in great coats or trench coats or denim jackets, transforming it into looks both hourglass and empire via couture techniques.

And it has been the province of Thom Browne, who, 10 years after he first came to Europe to show his shrunken men’s suiting at the Pitti trade show in Florence, doubled down on his twin trademarks (the prepster in the gray flannel suit; trompe l’oeil dressing) by creating a self-reflexive conversation between the two.

For every politely below-the-knee pleated skirt and jacket and shirt in classic pinstripes or plaid; for every duck-embroidered pair of red, white and blue patchwork pants or cream cable knit; or shrunken tuxedo with an intarsia portrait of the monocle-wearing Lady Una Troubridge by the 1920s Paris-based American artist Romaine Brooks, he produced its twin: a round-necked, long-sleeved, mid-calf sheath dress made to fool the eye by etching its ties and shadows and layers out of an indecipherable amalgamation of micro-beading, metallic bullion thread embroidery, minute feathers and chiffon weave.

The work was extraordinary — you could spend hours trying to parse how it came together — and singular, and raised some pointed questions about gender, uniforms and preconceptions. But Mr. Browne has made this point, and this joke, before. It’s worth repeating, and he does it beautifully, but maybe not ad infinitum.

Such was the case at Givenchy, anyway, where Clare Waight Keller also delved into the power suit and the question of silhouette, belting her longer jackets atop trousers and then rounding the shoulders, broadening them, dropping them down and then ballooning the sleeves out from elbow to wrist in a courtly curve and a useful exercise in shape-shifting. Albeit the more interesting pieces were minidresses in taffeta that took that idea and blew it up, literally, into giant puff sleeves that circled round the back in an enormous flounce (more interesting than the floral dresses in a Japanese vase print and micro-pleated technical silk with curving little ruffles at the hem, cuffs and neck).

Just as the shoulders (they stick out as a trend) at Stella McCartney, jutting forth geometrically in oversize tweed moto vests and atop otherwise no-fuss shell-pink frocks, were made to carry the call to upcycling arms woven through the work.

It was implicit in what looked like crafty macramé dresses that were actually knit from strips of old T-shirts, the yarn necklaces/regimental sashes from the artist Sheila Hicks slung over the shoulders to accent a slipdress or looped around the neck of a green silk blouse speckled with leaping horses, and the big, quilted bathrobe coats born from the remnants of former collections.

More explicit, meanwhile, was Pierpaolo Piccioli’s tilt to the emotional at Valentino, where he had commissioned a small book of love poems (left on every seat) from a quartet of authors, and swapped his brand’s logo for lines such as, “There’s a forever beyond the sky, I think we should go there tonight” and, “You thought I was too dark until I stretched into a galaxy.”

Along with appliqués of roses, beaded lips and a sketch of an embracing couple that echoed a Roman fountain (fruit of a collaboration with Undercover’s Jun Takahashi, who in his own subversively witty collection took inspiration from a darker source: Luca Guadagnino’s blood and sorcery and modern dance remake of “Suspiria”) the words appeared on swingy trapeze coats atop little tunics and flowing voile gowns, trenches and tulle confections.

The message was plain to see, though in some ways it was also unnecessary, as proven by a plain black silk gown dropped off the shoulders and skimming the torso to swirl out over the floor, and a red silk dress with a drawstring waist, an integral scarf tossed just so about the neck and a long pink gilet tossed on top. There was poetry in their lines. Lean in and listen.