WEDDING shamers think a couple are 'destined for divorce' after the pair chose a 'tacky' wedding cake topper which depicts the bride dragging the groom away from the TV.

A photo of the unusual cake decoration was shared on the Facebook group That's It, I'm Wedding Shaming and people have absolutely slated it in the comments.

The cake topper appears to show a blonde bride dragging her reluctant husband away from the TV, where a Philadelphia Eagles American football game.

The figurines are incredibly detailed, and the artist has even added minute crisps, beer and a remote control.

By contrast, the top layer's icing is sloppily applied and childish sprinkles have been added for decoration.

The Facebook user came across the cake on social media and couldn't resist sharing with the wedding shaming group. 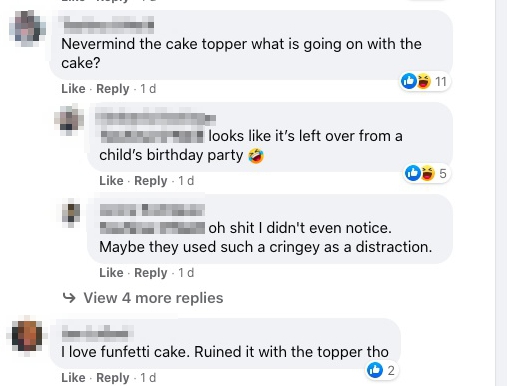 She said: "Posted by my old high school friend that attended someone else’s wedding… I love the Eagles as much as the next Philadelphian, but I hate this."

Many people were quick to comment on the wedding shaming post, and give their thoughts on the cake topper.

A considerable number took issue with the idea the bride is dragging her hubby to the altar.

"I hate these cake toppers where shes dragging him," one wrote. "If he needs to be dragged, I will NOT be with him!" 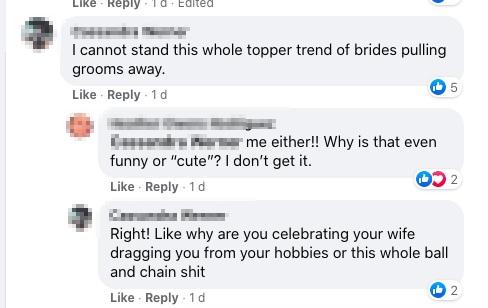 Another said: "I hate toppers like this. They always make the woman seem 'naggy' or just in general bad.

"If my future husband can't detach from a football game long enough to get married I'm not interested. I know they're supposed to be a joke but I don't really think they're funny."

A third said: "I literally hate the 'bride forcing the groom into marriage' aesthetic.

"I’d much prefer to see two people happy to be in love with each other.

A fourth mused: "Save this photo for the divorce filings."

Meanwhile, others took issue with the sorry state of the cake itself.

Someone wrote: "I mean yeah, the topper is terrible, but are we going to discuss that frosting and sprinkle situation?

"Because those are literally what you get in the canned Funfetti frosting at the store."

Another chimed in: "What is that actual cake though?"

For more wedding news, a bride and groom were shamed for ‘cattle brand’ wedding cake which looks like a ‘crusty, infected nipple’.

And as we told you previously, wedding shamers mock lopsided cake because it looks like ‘it’s collapsing’ – but some say it’s supposed to be that way.

Plus, we also revealed wedding shamers mocked one bride for wearing blue CROCS down the aisle.