Kelly Orians and Thomas Frampton had two weddings in two cities in one day.

“It was all about keeping our family and friends safe and healthy during this pandemic,” said Mr. Frampton, 37, a law professor at the University of Virginia.

Had the couple, who currently split their time between Charlottesville, Va., and New Orleans, picked just one city, then one set of parents would have had to travel almost 1,100 miles for the wedding. “So we did the traveling for them,” said Ms. Orians, the co-director of the First 72+, a program in New Orleans that helps ease the transition from incarceration to everyday life. She graduated from the University of Colorado at Boulder and received a law degree from the University of California, Los Angeles. 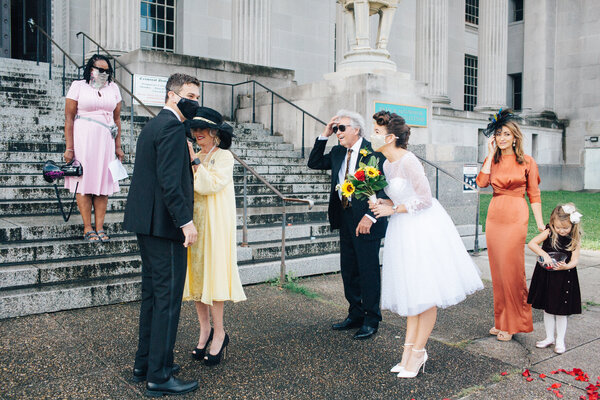 “Doing two events 1,000 miles apart on the same day might seem unorthodox, but we wanted it to feel like both families were part of the same ceremony,” said Ms. Orians, who met Mr. Frampton in 2015 in New Orleans, when they were both public defenders. Each had a significant other at that time, so they settled on becoming friends.

Four years later, the public defenders were brought together by a mutual friend in trouble with the law, their lives now in a completely different place. They were both single and while Ms. Orians was busy running First 72+, Mr. Frampton, then a lecturer of law at Harvard, was living in Cambridge, Mass.

Ms. Orians was appointed to represent their mutual friend, who had spent four years behind bars and was living life as a free man in New Orleans until authorities belatedly accused him of starting a riot at one point during his incarceration. Mr. Frampton, who had more trial experience and had successfully defended the same client on his earlier cases, quickly reached out to Ms. Orians to offer help, which she gladly accepted.

“To be honest, when we first started talking, I was really intimidated by Kelly, who is a wildly impressive person,” Mr. Frampton said. “In a world of criminal justice performers, she was an incredibly formidable and successful person.”

Mr. Frampton agreed to be a co-counsel with Ms. Orians on the case.

Although the charges were eventually dropped, there was still a case to be made for a potential love story between the two lawyers. Ms. Orians set this in motion by “working up the nerve,” as she put it, to ask Mr. Frampton if he would escort her to a Mardi Gras ball in New Orleans, which became their first date.

“Since that day, there has always been an ease between us,” said Mr. Frampton, who graduated from Yale, from which he also has a master’s degree in American studies. He earned a law degree from University of California, Berkeley, School of Law.

“In fact, I know that she is always going to push me,” he said. “She’s going to challenge me my whole life.”

In August, Mr. Frampton emerged from quarantine with Ms. Orians, and shortly thereafter proposed to her in Rehoboth Beach, Del., while on vacation.

“We knew we definitely wanted to get married, though we didn’t want a long engagement,” Ms. Orians said. “Based on what we had been through with Covid, we had become fearful of our respective families risking their lives just to see us.”

They devised their unusual wedding plan, a doubleheader of sorts, with the biggest stars outfitted in a white polka dot wedding dress and dark tuxedo.

It all began on Ms. Orians’s home turf, in the early morning hours of Nov. 7 in New Orleans, on the steps of the Orleans Parish Criminal District Court, where Judge Nandi Campbell officiated before seven guests, including the bride’s parents, Constance Orians and Gregory Orians.

In a nod to their beloved New Orleans Saints football team, the bride recited her vows behind a gold sequin mask; the groom did the same behind a black sequin mask.

Shortly after, the couple made a beeline for the airport and took an early afternoon flight to Charlotte, N.C., where they had a brief layover before boarding another plane to Washington.

During the flight to Washington, the bride switched from white strappy stilettos to a pair of light blue hightop converse sneakers, decorated with fake flowers to match her bouquet of sunflowers, daisies and red roses.

They arrived at Bishop’s Garden at Washington National Cathedral before sundown, and soon after had their legal wedding — a Quaker-style, self-uniting ceremony led by their friends, Anne L. Kendall and David Kendall. The intimate ceremony, with five guests in attendance, included the groom’s parents, Betsy Karel and George Frampton Jr., and stepmother, Carla D’Arista, the groom’s brother, Adam Frampton, and his sister-in-law, Karolina Częczek.

After the ceremony, the couple returned to their hotel, about five blocks from the White House, when they happened upon scores of people dancing in the streets and car horns blaring in celebration of Joe Biden’s election to the presidency.

“After we dropped our bags at the room we decided to go for a stroll through Black Lives Matter Plaza,” the groom said. “It was an awfully fun reception, and we got lots of undeserved applause from well-wishers and celebrants.”

The bride eventually chucked her bouquet over the White House fence, “as a way of saying goodbye to single life,” she said, “and a single-term president.”

The bride said that while she and Mr. Frampton were no longer public defenders, they are “still partners in every sense of the word.”

“And now we have a great story to tell our own children one day,” she added.

In fact, they will always have two stories to tell.

Where Ceremony No. 1 was at the Orleans Parish Criminal District Court, New Orleans. Ceremony No. 2 was held at the Bishop’s Garden at the Washington National Cathedral.

In Memory of Sean The bride honored the memory of her brother, Sean, who died 30 years ago when he was 10 and she was 4. On the inside of her wedding dress, she sewed a gold charm depicting a royal flush he had given her as a present before he died.

Three Dog Nights The couple quarantined with the bride’s parents, and the family’s dogs, all three of them.