A TIKTOKER has been slammed by a doctor after filming himself with "second degree" shoulder burns.

The social media user had been out in the sun all day and was left with two large blisters from too much sun exposure. 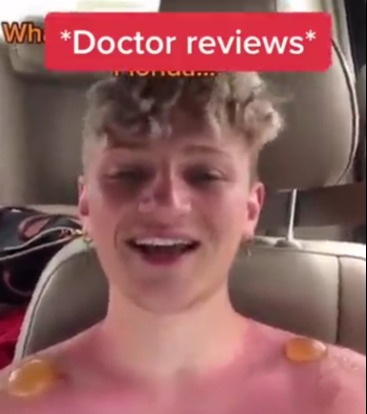 Driving back from a trip to Florida, the TikToker was lip syncing to Rihanna's Disturbia while he told his followers to wear sunscreen.

Dr Karan Raj explained that it takes just one blistering sunburn to double your chances of developing Melanoma later in life.

He said: "Melanoma is the deadliest form of skin cancer."

Dr Karan then points to the blisters that the TikToker has and says: "These bad boys are second degree burns.

"If you're going to be out in the sun screen of SPF30 and reapply every two hours."

The video has been liked over 125,000 times and has been shared widely. 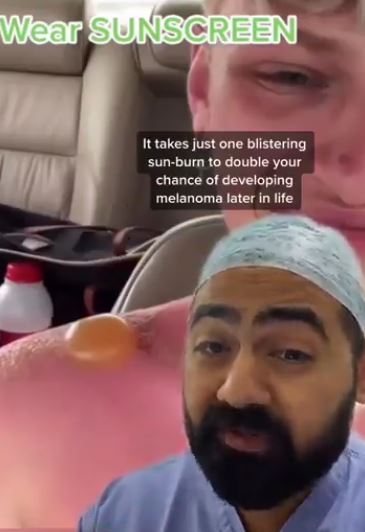 LloydsPharmacy pharmacist Anshu Kaura also explained that some of most sensitive areas of your skin are those which are often neglected when it comes to applying suncare, such as your lips, eyelids, ears, scalp and feet.

She added: "Your eyelids are one of the parts of your body which are most vulnerable to sun damage as they are exposed to the sun on a regular basis and your lips have naturally thin skin making them more vulnerable to penetrating rays.

"Therefore, they need a little extra protection as in addition to burning, time in the sun can quickly result in dryness, chapping and loss of collagen.”

If you don't protect yourself correctly in the sun then you run the risk of getting Melanoma.

Melanoma skin cancer is the fifth most common cancer in the UK with around 16,000 new cases diagnosed each year.

The most common sign of melanoma is the appearance of a new mole or a change in an existing mole.

In most cases, melanomas have an irregular shape, are more than one colour, may be itchy or bleed and gradually change shape, size or colour.

Because of these risk factors, the easiest way to reduce risk of melanoma is to wear sun cream all year round, avoid the sun in the middle of the day and avoid tanning beds.

The Sun's Dying For A Tan campaign raises awareness about the dangers of using sunbeds.

Non-melanoma skin cancer refers to a group of cancers that slowly develop in the upper layers of the skin.

Around 147,000 new cases of non-melanoma skin cancer are diagnosed each year.

It affects more men than women and is more common in the elderly.

The first sign of non-melanoma skin cancer is usually the appearance of a lump or discoloured patch on the skin that persists after a few weeks and slowly progresses over months or sometimes years.

In most cases, cancerous lumps are red and firm and sometimes turn into ulcers, while cancerous patches are usually flat and scaly.

It is getting more common, thought to be because people are going abroad for holidays.

More than 2,300 people die every year in the UK from melanoma. Most people (80 to 90 per cent) are monitored for one to five years after treatment and are then discharged with no further problems.

More than one in four skin cancer cases are diagnosed in people under 50.

Melanoma can spread to other organs in the body and so it is the most serious form of skin cancer.