For the past 10 years, the Melbourne Fashion Festival has been a leader in diversity, sustainability and inclusion but incoming chief executive Caroline Ralphsmith thinks the organisation could do more, with the assistance of businesses such as Victoria Bitter.

“There’s an opportunity to educate the public,” Ralphsmith says. “Especially when it comes to sustainability and upcycling. It’s so important to be adding to the community and civic outcomes, rather than being something more decorative. With diversity there’s a chance to make a statement.” 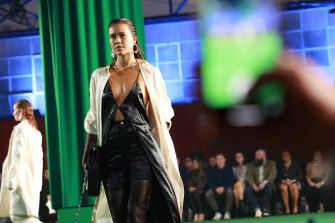 Ralphsmith is performing a corporate quick change, having been chief executive at Fed Square since February 2021, following five years at the Victorian Racing Club, where she worked as general manager for customer engagement. Joining the board of the Melbourne Fashion Festival in October, Ralphsmith, known as Ralph, could not resist the chance to focus on fashion.

“I have an insatiable habit, loving fashion from the moment I could afford it,” Ralphsmith says. “Mum used to tell great stories of making her own clothes and having to whip something extra up when she was told her skirts were too short. As a student, I would make my own dresses for black tie balls and I have passed that on to my daughter. Now I’m more of a mender.”

In August Ralphsmith takes over the role vacated by Graeme Lewsey who guided the Melbourne Fashion Festival through three naming rights sponsors, championed the inclusion of First Nations designers, sustainability and adaptive fashion. Lewsey stepped down in February following treatment for head and neck cancer. He is currently in remission and works as an ambassador for Head and Neck Cancer Australia. 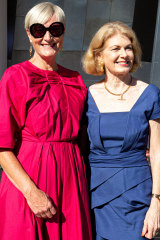 Caroline Ralphsmith, the incoming chief executive of the Melbourne Fashion Festival, with Laura Inman, chair of the not-for-profit event held annually in March. The pair attended the festival’s Welcome to Country held at Fed Square.

During Lewsey’s tenure Melburnians were treated to runway performances from Celeste Barber, plus-size activist Ashley Graham and enduring supermodel Helena Christensen. The festival, which has been running since 1996, is a ticketed event open to the public, unlike the trade-focussed Australian Fashion Week which just finished its Resort 2023 season in Sydney on Friday.

“We are very pleased to welcome Ralph as new CEO, at a pivotal time when we are embracing a new era of opportunity and growth for the festival,” Laura Inman, Melbourne Festival chair said in a written statement. “Ralph brings the depth and breadth of expertise and leadership essential for optimising our ambitions.”

Those ambitions could include greater collaboration for the not-for-profit organisation with the corporate sector, with Ralphsmith highlighting Victoria Bitter’s team-up with Melbourne brand Strateas Carlucci from this year’s festival.

“When you think of these brands and the juxtaposition, something amazing can come out of it,” Ralphsmith says. “It’s a matter of looking at things differently.”

The First Nations fashion show was another highlight of Ralphsmith’s Melbourne Fashion Festival experience, which was impacted by COVID-19 restrictions as the city emerged from lockdown. Usually, around 15 per cent of ticket sales are from interstate guests. 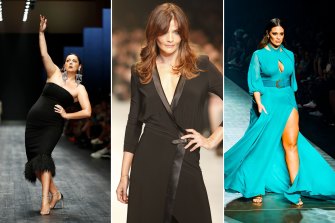 Celeste Barber, Helena Christensen and Ashley Graham are among the celebrities to have participated in Melbourne Fashion Festival. The event has been sponsored by L’Oréal, Virgin airlines and is currently supported by PayPal.Credit:Getty, supplied

“We have to figure out the new normal, what it looks like and what it means to Melbourne and the fashion festival,” Ralphsmith says. “There’s this wonderful opportunity to firmly restablish Melbourne’s reputation as Australia’s fashion capital. We can celebrate local designers, the local industry and make a bigger splash.”

Julia Browne, founder of Melbourne Fashion Hub, which supports emerging designers, highlighted Ralphsmith’s lack of professional experience in the fashion industry and is hoping that groups will be consulted in the coming months.

“There really needs to be a rethink about what the key objectives will be in 2023 and making sure that they will be implemented successfully,” Browne says. “What will be happening with repurposing, the digital space and the metaverse? On a positive note, hopefully because she doesn’t have a fashion background she will be able to offer a fresh perspective.”

“When I went to the Melbourne Fashion Festival this year I didn’t really feel that there was any innovation in programming and presenting, except for the Independent Program at Collingwood Yards. I know that there were issues with COVID-19 but in 2023 there can be no excuses.”