BURBANK, Calif. — Tracee Ellis Ross, an actress on “Black-ish,” executive producer on the spinoff “Mixed-ish” and, as of last month, beauty entrepreneur, wanted to talk about what wellness means to her. “At 18, I woke up like this,” she said. “At 46, I care for it.”

In September, Ms. Ross released a hair care line, Pattern, which features three conditioners for different curl patterns, a cleanser, a serum made with luxurious oils, and hair tools. The line, she said, is “a 20-year dream, 10 years in the making.”

The move seems like a natural extension for Ms. Ross, who often documents her trials and triumphs — frequently on Instagram — with jade rollers and glass blue balls as one way of dealing with, in her words, the “weird anxieties” that can come with getting older.

According to Nielsen, black women make up 85 percent of spending within the ethnic hair care and beauty aids category. Within the entire beauty marketplace, black consumers spend a total of $473 million in a $4.2 billion industry.

Mintel, a global research firm, puts the value of the black hair care industry at $2.5 billion (a figure that does not include wigs, weaves, extensions, salon visits, hair accessories and electric products).

At a time when black women have more choices than ever to experiment with on their hair, they will often buy and test a variety of products, and then stick to a specific lineup that helps them achieve the hairstyle they are looking for.

Ulta, where Ms. Ross’s line is sold, carries more than 30 “curl enhancing” products, and Target carries more than 60 products for “textured” across different stores. Ms. Ross is aware that she was stepping into a competitive market, but views her entry more as contributing to a community she has been a part of for so long.

“I work out and take care of my skin,” she said. “I roll my face. I care for my hair. I look for safe products. All of those kinds of things really matter to me.”

But some days, “there is no amount of self-care that can match sometimes the amount of things that I have on my plate,” she said.

Ms. Ross, who had squeezed in a workout before being interviewed, was sitting in her trailer on a lot in Burbank with her hair up in a slicked-back bun. She was there for a table reading and notes session for “Mixed-ish,” a show Ms. Ross executive produced and narrated about a bi-racial family, which premiered on Sept. 24 on ABC. 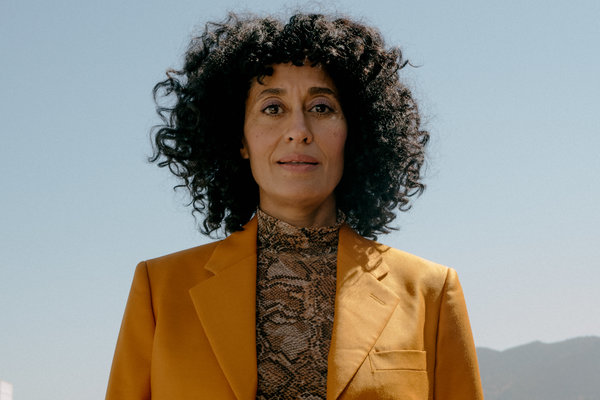 As a child, Ms. Ross knew when she woke up in the morning that Diana Ross, her mother, would be there to smooth out her bed head edges with heat before she went to school. She grew up going to the hair salon every Saturday for a blowout that was meant to last a week, with the help of sponge rollers and “the tightest ponytail of all ponytail.”

“I was raised by a mom who was so clearly herself in every environment that she was in,” Ms. Ross said. “I saw, experienced and witnessed her, and I took that as an example.” She paused. “I understand that her fame offered her that privilege, but my mom was that before the fame.”

Things changed when Ms. Ross went to school in Switzerland for eighth grade. For the first time, she was left to her own hair devices. She no longer had access to the beauty store with products she needed. An Italian girl gave her a tip: Beer helped to define curls. That, Ms. Ross said, was how she discovered how harsh certain substances can be, and how “bad alcohol is for the hair.”

She moved back to the United States in 10th grade and decided she wasn’t going to resume relaxing her hair. She said her family supported her doing whatever she wanted to her hair, even if that included chemical treatments and blowouts. Her mother, aunts, sisters and other family members all had “trailblazing hair,” she said.

Although Ms. Ross mentioned Lisa Bonet, Rae Dawn Chong and Neneh Cherry as women she saw wearing their natural hair, there weren’t many examples when she was growing up. Instead she was influenced by what she was seeing on television, where shows and commercials promoted straight and long hair as ideal.

When Ms. Ross entered the early stages of her audition circuits in her 20s, her hair was still transitioning. Not every strand had grown out of the damage from heat and chemical treatment.

The Importance of ‘Girlfriends’

In 2000, Ms. Ross got the role of Joan Carol Clayton on “Girlfriends,” a show about four black women navigating the workplace, love lives and each other. She played a lawyer in Los Angeles who had a fully natural head of curly hair, which was rare at the time on television.

The three other actresses had their own distinct personalities and hairstyles, like sew-ins, up-dos and faux locks. Although hair wasn’t a distinct story line in the show, how they presented spoke to larger conversations happening in real life surrounding everyday black women going into the office.

In “Hair Story: Untangling the Roots of Black Hair in America,” Ayana D. Byrd and Lori L. Tharps call the early 2000s the “divided decade,” because more women were wearing their hair natural, including stars like Alicia Keys, India Arie and Lauryn Hill.

However, women with weaves had no problem letting you know they were wearing one. In Chris Rock’s documentary, “Good Hair,” stars including Nia Long and Raven-Symoné described in detail what type of weaves they were donning.

In 2009, Tyra Banks, known for her long, sandy blond lace fronts, appeared on the first episode of the fifth season of her talk show wearing her natural hair, slicked back. “I felt like I needed to solve this mystery,” she told the audience. “I’ve worn weaves and wigs and pieces and clip-ons and clip-outs and clip-downs and arounds since I was 17, 18 years old.”

All of this spurred conversations, which continue today, about the ways black people are showing up in professional settings, and what is “acceptable.”

“Girlfriends” was important in more ways than one. Rea Ann Silva, who invented the Beauty Blender, was the head makeup artist and spent hours cutting sponges to achieve a flawless foundation finish.

The show was shot in high definition, which was rare at the time. Ms. Ross would dress herself and do her own hair, waking up three hours before call time to let her hair air dry. “So, end of Season 2, I started to realize that Joan and Tracee looked the same,” she said. “Same clothes, same hair.”

The experience prompted Ms. Ross to want to start a hair care line in 2008, the year “Girlfriends” ended. But not everyone thought she had enough credibility, so they offered alternatives. A manager suggested a line of wigs; someone else suggested a TV show on hair. Ms. Ellis tried teaming up with a beauty brand, but she got herself out of the deal when it didn’t go in the direction she expected.

Although Ms. Ross was lauded for her natural hair, she noted that “Girlfriends” was still at the beginning of a larger natural hair care movement. In the early years of “Girlfriends,” Ms. Ross attended the Essence Music Festival, a series of events and performances at the Mercedes-Benz Superdome in New Orleans that started in 1995. It has been called the mecca trip for black women, a trip all should take.

It was there that a festivalgoer asked Ms. Ross why she wasn’t doing her hair, if she was on TV. Ms. Ross, who was still growing out her hair from the damage of relaxer since the 10th grade, responded, “God did my hair. And it’s very well done.”

“I love looking gorgeous,” she said of her life these days. “I love feeling gorgeous.”

Ms. Ross, balancing a demanding life, is in pursuit of the full human experience. She tries to get eight hours of sleep a night; work out at least two days a week (she credits her background as a track and cross-country athlete for her discipline during 14-hour days on set); and loves a bath.

“If I’m working out, I remember to engage my abs to stand up straight, and I have an open heart,” she said. “My body physically being strong has helped my heart and my mind be able to do the things that they want to do.”

There are things she thought would have happened by now, at 46. “I thought I was going to be married and have kids,” she said. “I thought my hair was going to have grown down to my butt, but I also keep trimming it because I kind of like the way it looks around my face when it’s shorter.”

Boundaries are a huge part of Ms. Ross’s self-care, like knowing when and what to share with her millions of followers online. “I’m not that private, but I have a real sense of what is sacred to me,” she said.

For Ms. Ross, it all comes down to expressing what she needs to feel safe, and also loved. “I’ve been a speaker upper my whole life,” she said. “Absolutely. Especially in the protection of my image.”

And these cheapo vanity face tools that she uses on Instagram, along with beauty as a whole? It makes up “a very small percentage,” she said, “of what it takes for me to feel like I’m living an abundant juicy life.”