It’s the financial riddle of the 30-something years. How does anyone, even those with a stable, upwardly mobile job, let alone a family, afford to live in places like New York City, Los Angeles, Boston, Chicago, San Francisco or Washington, D. C.?

The answer: Many are bankrolled, to varying degrees, by their parents.

Hold the eye roll and exasperation about millennials and their failure to launch or the gushing of financial resentment for a moment, and consider the unforgiving economics of trying to make it in this country today. Wages have stagnated, while real-estate, medical and child care costs have skyrocketed. As one economic analysis concluded recently: “For Americans under the age of 40, the 21st century has resembled one long recession.”

Kimberly Palmer, a personal finance expert for NerdWallet, a consumer finance company and app based in San Francisco, said, “A lot of 30-somethings are still getting financial help from their parents, if they are lucky enough to take advantage of it. Incomes today are lower than they were for Gen Xers and boomers at the same point in their lives. Plus, many of the millennials graduated into the recession, and when you hit your 30s, there are a lot of lifestyle changes and expenses, like having kids, getting married and buying a house.” 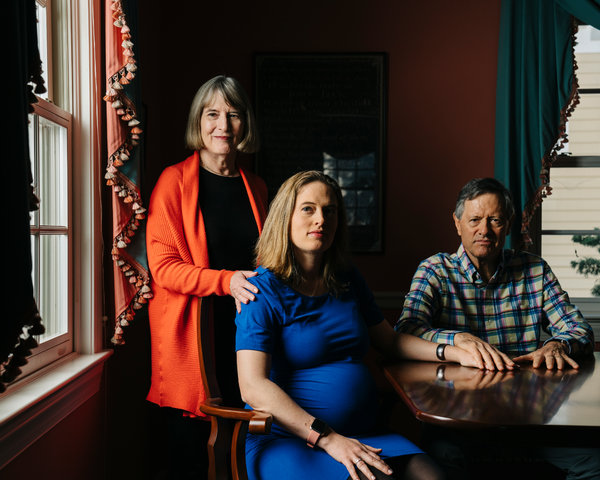 More than half (53 percent) of Americans aged 21 to 37 have received some form of financial assistance from a parent, guardian or family member since turning 21, according to a 2018 report by Country Financial, a financial services firm in Bloomington, Ill. This may include paying bills for a cellphone (41 percent), groceries and gas (32 percent), rent (40 percent) or health insurance (32 percent).

Then there are the free services. Ms. Palmer, who is 39 and lives near Washington, D.C., said that the free 20 to 25 hours of child care she receives every month from her parents contributed to her family’s decision to have a third child (Dylan Palmer Davé arrived on Feb. 9). If she were to pay a babysitter, Ms. Palmer estimates it would add up to around $6,000 a year.

On average, each millennial parent receives $11,011 per year in combined financial support and unpaid labor, the 2017 TD Ameritrade Millennial Parents Survey found, for an annual total of $253 billion in America.

That assistance is crucial for many, according to the study. A quarter of millennial parents receive hourly support from their parents, in the form of child care or household help, and 18 percent of those receiving financial support say they couldn’t afford their current lifestyle without it. Over half of these millennial parents (remember that more than a million are becoming mothers every year) say they have a generalized anxiety about not earning enough to support themselves and their families.

In cities like New York, where private preschool can cost over $30,000 a year, families need special help footing the bill. “Education is incredibly expensive and keeps going up, but grandparents feel very strongly about their grandchildren having a good education,” said Dana Haddad, who runs New York Admissions, an education consultancy that works with children starting at 10 months.

In her practice, Ms. Haddad, a former admissions director at Horace Mann School, estimates that 10 to 15 percent of checks come from grandparents.

Adulting Without a Net

What it all amounts to is a much different picture, at least in middle-to-upper-class America, from how this age cohort has been viewed in the past. On the television show “Thirtysomething,” which aired from 1987 to 1991, the all-white cast of characters seemed to be economically emancipated from their parents, who rarely factored into the story lines.

Behind the jokes about “adulting”; the new fashion for referring to male children as “buddy” instead of “son” (as if still a kid oneself); the performative generational cluelessness about basics like how many towels to own, is a more serious and divisive question: Have you or haven’t you cut the financial cord with your family?

How they answer portends very different economic outcomes, career paths and life choices. That’s if they answer. Despite how common it is for a certain set of affluent millennials to be getting help from their parents at an age when many of them are themselves parents, it’s still the last taboo of finance that people don’t want to admit, according to Ms. Palmer.

“It’s easier to talk about saving more or being frugal,” she said. “There’s not as much shame around those topics.”

While it’s true that families with means have always helped their children (discreetly or not), what’s different today is that as the economy has more extreme gyrations and wages flatten, family wealth plays an outsize role in helping people get ahead, said Chuck Collins, a scion of the Oscar Mayer food corporation and the author of “Born on Third Base: A One Percenter Makes the Case for Tackling Inequality, Bringing Wealth Home, and Committing to the Common Good.”

Those who do not have parental assistance in their 30s, however, continue to be at a disadvantage. “They are grappling with paying off student-loan debt, their savings might not be as strong because of that, and many are taking care of other family members,” said Iimay Ho, 32, the executive director at Resource Generation, an organization that works with people age 18 to 35 with wealth or class privilege to engage on issues of inequality.

Ms. Ho said there was no way she would have been able to amass the $200,000 she has in net assets if her parents, both of whom immigrated from Taiwan to pursue advanced degrees, hadn’t paid for tuition at the University of North Carolina at Chapel Hill, given her close to $100,000 toward buying a condo in Washington, D.C., and continue to give her about $10,000 a year.

For those without parental cash at the ready, there’s often some kind of debt hangover that holds them back in significant ways. Roger Quesada, 34, calls his $65,000 of student-loan debt to Sallie Mae, which incurs $400 a month in interest payments alone, “a jail sentence.” A lapse in his payments ruined his credit, he said, and has hampered his financial and career aspirations.

“It’s been trying to navigate our economy without one of the most important components — good credit — that provides enormous advantages and privileges,” said Mr. Quesada, who grew up working-class in West New York, N.J. “That’s something many in my generation take for granted — graduating debt free.” They also take for granted, he said, financial advice that “native parents with an upper hand economically have. I couldn’t rely on my mother for anything after I left home. She is retired, disabled, barely scraping by, and depends on Social Security. If anything, I need to be helping her.”

It was important to Mr. Quesada that whatever profession he chose would offer a steady income and growth potential for the future. Settling on e-commerce, he is now a merchandising manager at New Avon, earning six figures, he said.

“I’m the son of an immigrant,” Mr. Quesada said. “My life would have been that much harder in Cuba. I feel happy with the success I’ve had.” He lives with his partner in Bergen County, N.J, where his home cost a fraction of what a comparable property would have in New York City, but came with a commute of over two hours to his office in Manhattan.

Those who do receive parental assistance often do not fit neatly into the stereotype of lazy, entitled millennial. Susan Alvarez, 32, makes over $75,000 as the associate executive director at the Y.M.C.A. of San Diego County. “That is a really decent salary, but it’s still not enough to cover a condo,” she said.

So last year Ms. Alvarez’s parents surprised her with a $50,000 cash gift to help with a down payment on a $435,000 condo three blocks from the beach in San Diego. “I grew up middle-class, and my parents immigrated from Cuba,” she said. “They saw that I’ve worked hard but also that I had the bad luck to graduate into the 2008 recession. I didn’t get a job that paid well enough and had benefits until I was 23, which meant I missed out on almost two years of earning.”

Evidence suggests that purchasing a home, a life event that many hope to reach in their 30s and one of the primary ways people build wealth, is essentially out of reach in most major cities unless your family has generated a good deal of wealth. (Nationally, homeownership rates are falling for millennials, and only two in 10 have a mortgage or home loan.)

Mary Wallace, a real-estate agent with Unlimited Sotheby’s International Realty in Boston who works primarily with first-home buyers (and is married to Mr. Collins), said that in 20 years she has rarely seen anyone in their 30s who did not have family help or an inheritance for their down payment. “In our market a buyer is expected to have 20 percent down to compete — that is between $80,000 and $100,000 to become a homeowner,” she said.

Jessicah Pierre, 27, a media specialist at the Institute for Policy Studies, a progressive think tank, has felt she is on unequal ground. “A friend was telling me how it wasn’t that hard to purchase a home. She was like, ‘Do this, do that.’” said Ms. Pierre, who lives in Dorchester, Mass. “But she wasn’t considering the fact that she graduated without any student-loan debt, came from a two-income household, as opposed to me. I am starting with negative wealth because I have loans to pay off and was raised in a family with only one income.”

Ms. Pierre’s father was an accountant in Haiti and became a cabdriver after immigrating to the United States because his degree wasn’t recognized. (She fully expects that she and her two siblings will take care of him in old age.)

No one, as Tom Postilio, a real estate agent in New York at Douglas Elliman, put it, wants to post on Instagram: “‘So glad I could move into this apartment that I don’t make enough money to buy, but thanks Mom and Dad for the cash.’” Mr. Postilio estimates that a quarter of his 30-something clients who are buying larger apartments (over two bedrooms) receive money from their parents, whether it’s in the form of a gift, a low-interest loan or co-purchasing.

But there’s a danger in not acknowledging the transfer of wealth (one estimate predicted the boomers will ultimately pass along $30 trillion to their millennial children, whether it’s monthly help with living expenses, free child care or receiving the annual gift exclusion of $15,000 from family members). It creates a distorted idea of what it takes to attain success and what financial milestones are actually achievable if you are starting from zero or less.

Simon Isaacs, 38, a founder of the parenting site Fatherly, thinks it’s important to give credit to his family, whose generosity, he said, was instrumental in helping him and his wife buy a home in Brooklyn, where they live with their two young children.

“I think millennials need to get past this narrative they’ve made it on their own and ‘I pulled myself up by my boot straps’,” Mr. Isaacs said. “It hides all the kinds of ways they have been privileged by their race or parental help.”